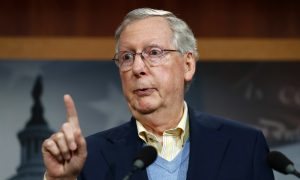 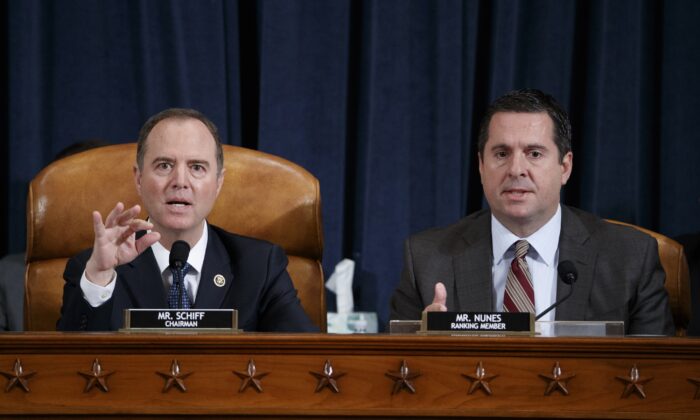 The House Intelligence Committee on Tuesday night approved its impeachment inquiry report against President Donald Trump on a party-line vote, which was expected.

The committee, chaired by Rep. Adam Schiff (D-Calif.), voted 13 to 9 on the “Trump-Ukraine Impeachment Inquiry Report.” The thirteen to approve are Democrats and the nine who voted against it are Republicans.

It comes after the Democrats on the committee drafted a 300-page report on allegations against Trump. It was written by Democratic staffers on the House Intelligence, Foreign Affairs, and Oversight Committees.

“This report chronicles a scheme by the president of the United States to coerce an ally, Ukraine, that is at war with an adversary, Russia, into doing the president’s political dirty work,”  Schiff said on Capitol Hill on Tuesday.

Earlier in the day, Trump told reporters that he would like Secretary of State Mike Pompeo, Acting Chief of Staff Mick Mulvaney, and Energy Secretary Rick Perry to testify should the impeachment trial reach the Senate, where it’s likely to be shot down.

Democrats claimed that the July 25 call between Trump and Ukrainian President Volodymyr Zelensky—where Trump asked his counterpart to investigate former Vice President Joe Biden and son Hunter Biden’s dealings in the Eastern European county—were part of a quid pro quo effort. They have claimed Trump withheld military aid to Ukraine for the investigations, which Trump and Zelensky have denied.

The 300-page report was rejected by the White House.

Republicans drafted their own report, rejecting the Democratic majority’s assertions.

“The evidence presented does not prove any of these Democrat allegations, and none of the Democrats’ witnesses testified to having evidence of bribery, extortion, or any high crime or misdemeanor,” the GOP report stated.

This week, impeachment hearings will move to the House Judiciary Committee, chaired by Rep. Jerrold Nadler (D-N.Y.), who will call up four constitutional law professors to discuss the gravity of impeaching a president.

The hearing, titled, “The Impeachment Inquiry into President Donald J. Trump: Constitutional Grounds for Presidential Impeachment,” will include testimony from Jonathan Turley, a professor of public interest law at George Washington University Law School; Noah Feldman, a professor at Harvard Law School and director of the Julis-Rabinowitz Program on Jewish and Israeli Law; Michael Gerhardt, a professor at the University of North Carolina School of Law; and Pamela Karlan, a professor of public interest law at Stanford Law School, according to the Judiciary Committee (pdf).

White House counsel Pat Cipollone sent a letter to Nadler on Sunday informing him that the White House won’t partake in the hearing.

“As for the hearing scheduled for Dec. 4, we cannot fairly be expected to participate in a hearing while the witnesses are yet to be named and while it remains unclear whether the Judiciary Committee will afford the president a fair process through additional hearings,” Cipollone told the committee. “More importantly, an invitation to an academic discussion with law professors does not begin to provide the president with any semblance of a fair process. Accordingly, under the current circumstances, we do not intend to participate in your Wednesday hearing.”