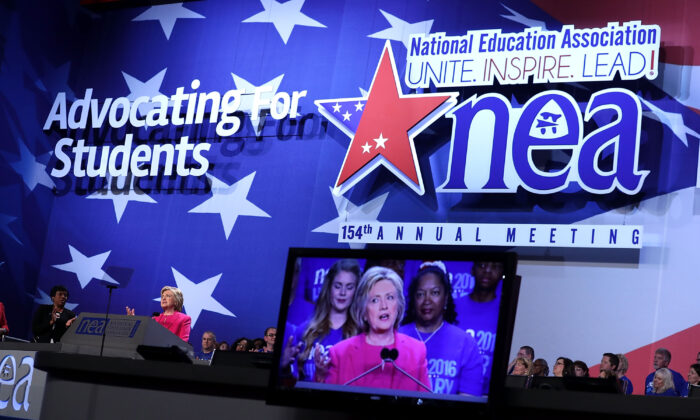 A bill co-sponsored by 18 House Republicans would remove the National Education Association’s (NEA) 116-year-old federal charter because of the union’s hyper-partisanship and support for extreme ideological policies such as critical race theory (CRT).

“The NEA can no longer be considered a public service worthy of its federal charter as it has drifted substantially from its core mission and become a massive political operation dedicated to electing Democrats and imposing a radical progressive agenda on America’s schools,” reads the bill, HR 7510, which was introduced April 14.

The NEA was chartered in 1906 by Congress ‘‘to elevate the character and advance the interests of the profession of teaching; and to promote the cause of education in the United States,’’ according to HR7510.

To date, the NEA is the only federally chartered labor union and, with that charter, it is “receiving a seal of approval from and support of their actions by Congress,” according to the proposal.

But the teachers union has strayed far from its original purpose, as reflected in the fact that, according to the proposal, “disclosures made to the [Department of Labor] Office of Labor-Management Standards (OLMS), from Sept. 6, 2019, to August 2021, the NEA spent over $116.7 million on political activities and lobbying, and in the 2020 election cycle, 95.7 percent of candidate campaign contributions by the NEA went to Democrat candidates.”

Data compiled by opensecrets.org shows that between 2012 and 2020, Democratic congressional candidates received 93 percent of NEA campaign contributions in Senate and House races.

Critical race theory is the neo-Marxist view that all U.S. economic, political, and social institutions, including schools, since before the nation’s founding have been and continue to be organized to advantage white individuals and disadvantage “people of color,” including blacks, Hispanics and other nonwhite persons. It’s also a CRT claim that all white individuals are inherently and unalterably racist, while all persons of color are inherently and unalterably victims of white racism.

The bill text further notes that “in 2021, NEA board member Mollie Paige Mumau wrote on Facebook that shooting people ‘hiding behind religious exemptions’ to vaccine mandates ‘would be quicker and ultimately safer than putting me and my friends and family at risk.’’’

A spokesman for the NEA didn’t respond by press time to The Epoch Times’ request for comment.

The bill was referred to the House Judiciary Committee. With Speaker of the House Nancy Pelosi (D-Calif.) and a slim Democratic majority in control of the lower chamber of Congress, the NEA charter repeal proposal has little chance of passage.

The proposal, however, would stand an excellent chance of passage next year if voters return Republicans to a majority in the House, a development that would shake U.S. politics to its foundations because of the power and influence of the NEA and other education unions, such as the American Federation of Teachers (AFT).

The introduction of HR7510 follows the publication of a report earlier this year by the Government Accountability Institute (GAI) that found that “Lily Eskelsen Garcia, the leader of the National Education Association (NEA), confirmed to Education Week that the ‘core business’ of the NEA is no longer [teacher] pensions and health insurance, but social activism and political lobbying.”

The GAI report also found that “data from the U.S. Department of Labor reveal that between 2006 and 2020, AFT and NEA donated approximately $726,200 to Gay, Lesbian & Straight Education Network (GLSEN). GLSEN bills itself as a ‘leading national organization working to guarantee LGBTQ+ students safe and affirming education.'”

The GAI analysis further reported that “research indicates that over the last three years, the AFT and NEA have donated approximately $3 million to pass-through groups that then fund Black Lives Matter,” the far-left racial activist group that has received hundreds of millions of dollars in corporate and charitable contributions in recent years, most of which, according to a growing chorus of critics across the political spectrum, is either unaccounted for or misspent.

In a statement provided to The Epoch Times, Fitzgerald said that “rather than supporting students, the NEA consistently puts the interests of progressive teachers’ unions over the learning of students. It is time for Congress to say enough is enough and revoke the NEA’s federal charter.”

Banks told The Epoch Times on April 18 that the NEA “has become nothing more than a union arm of the Democratic National Committee (DNC). In fact, during the last election cycle, the NEA gave more than 95 percent of its political donations to Democrats.

“Congress should not be actively helping a radical leftist group indoctrinate our children, and I appreciate Rep. Fitzgerald’s leadership on this initiative.”