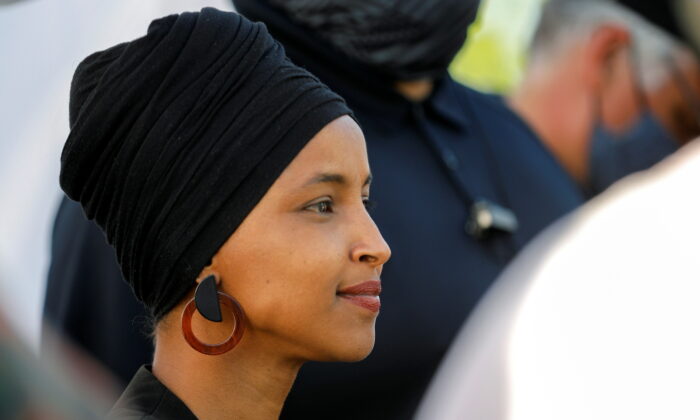 Rep. Ilhan Omar (D-Minn.) attends a concert at George Floyd Square on the first anniversary of Floyd's death, in Minneapolis, Minn., on May 25, 2021. (Nicholas Pfosi/Reuters)
Democrats

A group of House Democrats is urging Rep. Ilhan Omar (D-Minn.) to clarify what she meant when she equated the United States and Israel to the terrorist group Hamas.

“Equating the United States and Israel to Hamas and the Taliban is as offensive as it is misguided,” the group, including Rep. Brad Schneider (D-Ill.), said in a joint statement on June 9. “Ignoring the differences between democracies governed by the rule of law and contemptible organizations that engage in terrorism at best discredits one’s intended argument and at worst reflects deep-seated prejudice.

Omar earlier this week shared footage of her questioning of Secretary of State Antony Blinken during a congressional hearing. She had asked Blinken about how alleged victims of crimes could get justice if the International Criminal Court (ICC) wasn’t involved.

“I know you oppose the court’s investigation in both Palestine and in Afghanistan. I haven’t seen any evidence in either case that domestic courts both can and will prosecute alleged war crimes and crimes against humanity, and I would emphasize that in Israel and Palestine, this includes crimes committed by both Israeli security forces and Hamas. In Afghanistan, it includes crimes committed by the Afghan national government and the Taliban,” she said.

Blinken said that the ICC lacked jurisdiction to take up the cases, adding that absent a United Nations Security Council referral or a request by the state itself, “that’s not appropriate.”

The statement that drew the ire of fellow House Democrats was posted on Twitter. In sharing the footage, Omar wrote: “We must have the same level of accountability and justice for all victims of crimes against humanity. We have seen unthinkable atrocities committed by the U.S., Hamas, Israel, Afghanistan, and the Taliban.”

The letter came after Gottheimer, Luria, and Manning urged President Joe Biden to appoint an ambassador-at-large to combat anti-Semitism.

Omar responded to her colleagues on June 10.

“It’s shameful for colleagues who call me when they need my support to now put out a statement asking for ‘clarification’ and not just call. The islamophobic tropes in this statement are offensive. The constant harassment & silencing from the signers of this letter is unbearable,” she wrote in a Twitter statement.

“Citing an open case against Israel, US, Hamas & Taliban in the ICC isn’t comparison or from ‘deeply seated prejudice’. You might try to undermine these investigations or deny justice to their victims but history has thought [sic] us that the truth can’t be hidden or silenced forever.”

Jeremy Slevin, a spokesman for the representative, on June 8 accused the “far right” of “ginning up hate against Rep. Omar for a technical question about an ongoing investigation.”

“On a deeper level, the implication that a sitting Member of Congress should not dare conduct oversight over the State Department because it mentions crimes by the US is deeply toxic and antidemocratic,” he said on Twitter.

Slevin was reacting in part to House Republicans who had condemned the Minnesota Democrat’s remarks.

Rep. Steve Womack (R-Ark.) had said in a Twitter statement: “Absolutely reprehensible. Rep. Omar is likening the US and our ally Israel to the evil of Hamas and the Taliban. To openly compare the nation that welcomed her as a refugee to terrorist organizations is beyond wrong, ignorant, and hateful. This rhetoric has no place in Congress.”

Rep. Andy Biggs (R-Ariz.) had written on Twitter: “Grouping the U.S. & Israel with the actions of Hamas & the Taliban is disgusting. @Ilhan does not deserve to represent America with these vile & completely false comparisons.”

Omar has previously faced criticism for comments on Israel.

Former Rep. Max Rose (D-N.Y.) in 2019 called for Omar to apologize to Jewish constituents for her remarks that used an anti-Jewish trope that a cabal secretly controls high levels of government and other power centers. Omar did end up apologizing.

Nadler later said that a cartoon promoted by Omar and Rep. Rashida Tlaib (D-Mich.) had a “vile underlying message.”

Omar has frequently stood by her remarks, accusing critics of attacking her for her faith or skin color. Omar, a Muslim, immigrated to the United States from Somalia as a refugee when she was young.