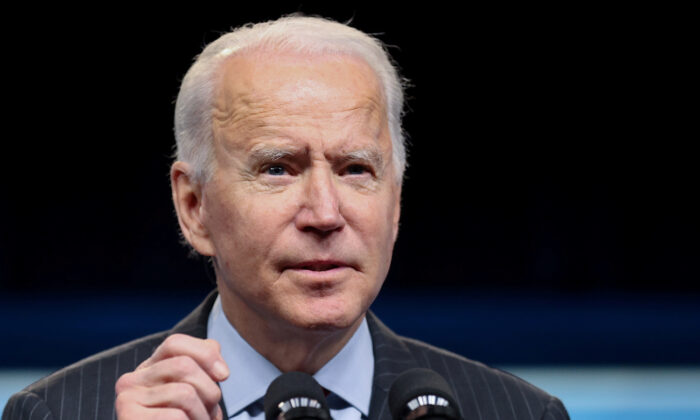 Several House Democrats on Friday called on President Joe Biden to appoint a “national gun violence” director, coming after the White House pushed Congress to try and pass more gun-control measures, including one that would limit liability shields for gun manufacturers.

“Currently, federal efforts to combat gun violence, including research on the impacts and causes of gun violence and law enforcement efforts to combat it, are siloed across agencies,” read a letter (pdf) from Reps. Joe Neguse (D-Colo.) and Lucy McBath (D-Ga.). “Appointing a National Director of Gun Violence to promote coordination of federal agencies will ensure these agencies are working collaboratively, including via the dissemination of critical data and coordination of shared goals, including the Bureau of Alcohol, Firearms, and Tobacco, Department of Justice, Health and Human Services, and the Centers for Disease Control and Prevention.”

The director role, they said, should be tasked with reducing firearms deaths and injuries by at least 50 percent for the next ten years.

However, the appetite for gun control among the American public might be diminishing. In the past year, gun sales exploded as about 8.5 million people purchased firearms for the first time, according to the National Shooting Sports Foundation. The FBI also said it processed nearly 40 million gun background checks.

Jurgen Braue, the chief economist at Small Arms Analytics and Forecasting, told Business Insider that “wave upon wave of uncertainty and concern [are] driving firearm demand” in the midst of the COVID-19 pandemic and riots last year.

“While we can agree that there are several ‘common sense’ and long overdue changes needed to our nation’s gun laws, we firmly believe that the path forward should be focused on supporting and protecting responsible, law-abiding Americans—not criminalizing and punishing them,” the U.S. Concealed Carry Association said in a letter to Biden earlier week, noting that as many as 105 million law-abiding gun owners could face criminal penalties.

“This Administration will not wait for the next mass shooting to heed that call. We will take action to end our epidemic of gun violence and make our schools and communities safer. Today, I am calling on Congress to enact commonsense gun law reforms, including requiring background checks on all gun sales, banning assault weapons and high-capacity magazines, and eliminating immunity for gun manufacturers who knowingly put weapons of war on our streets,” Biden said earlier this month during the anniversary of the Parkland, Florida mass shooting.