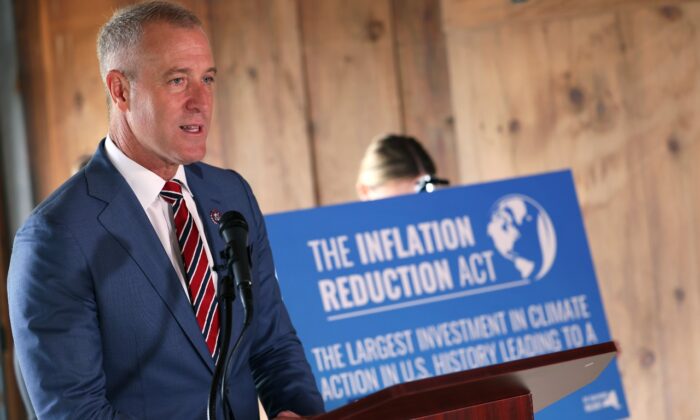 As the midterms draw near, the Democratic House campaigns chief finds himself at risk of losing the race for New York’s 17th District, an area that President Joe Biden won by 10 points in 2020.

As chairman of the Democrat Congressional Campaign Committee (DCCC), Rep. Sean Patrick Maloney (D-N.Y.) has been busy trying to help vulnerable Democrats across the country defend their seats in tough races.

That Maloney, 56, himself has become one of those Democrats represents a political embarrassment to the party, experts say, adding that this could be a harbinger for liberal defeats in many supposed Democrat strongholds.

The recent designation of the 17th Congressional District race to toss-up status by an independent pollster has created a pall amongst Democrats both in New York and nationally, said the experts.

The Lawler campaign has released internal polls by McLaughlin & Associates since the summer that show the state legislator with a lead over Maloney, but the latest polling is the first indication by independent pollsters that Maloney could lose.

Maloney having to fight for his seat will also cost resources for a party that is contending with competitive races all over the country, experts noted.

New York Warnings in 2021 Not Heeded

“Long Island last year was the canary in the coal mine and the Democrats did not heed that warning,” Rob Astorino, a former County Executive of Westchester County, who ran as the Republican nominee for governor in New York in 2014 and lost to Andrew Cuomo, told the Epoch Times.

“Maloney and company completely ignored the issue of crime last year and let it get worse. And now they’re going to suffer the wrath of the voters for not paying attention to them and making their lives worse,” Astorino added.

Long Island will stick with the GOP again this year, he predicted.

The area will be joined by Nassau and Suffolk counties going “red”, which could portend conservative victories in statewide races, including the governor’s race, according to Astorino.

“That redness is going to seep throughout the Hudson Valley which is critical for [Republican gubernatorial candidate] Lee Zeldin to win, and it is what’s going to help Mike Lawler win and pull off the upset” against Maloney, he said.

Astorino accused New York Democrats of being a “one-trick pony,” and betting everything on the mobilizing effect of Supreme Court’s reversal of Roe v. Wade on abortion, which remanded the issue back to the states.

Democrats thought the abortion decision would bail them out after liberals ignored the “economic issues and rampant crime” facing the state, he said.

“When they found out that that wasn’t true, and abortion wouldn’t save them, they just had no backup plan at all,” Astorino added.

In a surprising ad, Zeldin told voters: “Let me be clear. As governor, I will not change and could not change New York’s abortion law.”

“In one sentence, there went the entire Democratic campaign,” Morris told The Epoch Times.

“They were crazy to put themselves in that vulnerable of a position where a single sentence could end their campaign. But they did and the Republicans took advantage of that,” he added.

Morris said he felt that the Republicans were gaining a lot of momentum overall, but especially in New York because the “Democrats have no stoppers.”

“They have no issue to distract and bring votes.”

One political consultant said that it’s a bad time to be DCCC chairman, especially if you appear insincere or incompetent.

Tony Marsh, a media consultant with Savanna Communications, said that there are two underlying themes of this election for both Democrats and Republicans. The first is integrity; the second is political incompetence.

“Maloney has a little bit of each problem,” Tony Marsh, a media consultant with Savanna Communications, told the Epoch Times.

“He’s so busy campaigning everywhere else in America and overseas that he’s not paying attention to his own backyard,” said Marsh, who noted that Maloney’s overseas fundraising trips make him appear hypocritical.

Part of the criticism leveled at him is that Maloney has been outspoken in his stated belief that Democrats appear out of touch with the problems of average Americans, but the DCCC chair’s own behavior indicates that such comments are just a political talking point, said Marsh.

In an interview with the New York Times editorial board in August, Maloney criticized Democrats for not appreciating average Americans.

“I think that most of the voters that we ask about this think that we’re out of touch, they think we’re elitist, we think we are better than they are. And they don’t like it,” the DCCC chair added.

Yet this week, the Cook Political Report cited lavish fundraising trips that Maloney took to Paris and Geneva and the criticism it generated as one reason for opponent Lawler’s recent surge against the congressman.

In October, Lawler shared photos on Twitter of Maloney drinking wine and eating hors d’œuvres on a “help stop MAGA Republicans” tour to London, Paris, and Geneva that the Lawler campaign said was charged to the DCCC.

A recent report by Washington Free Beacon noted Maloney’s trip in February to an exclusive private club in Hollywood paid for by the DCCC.

Amid scrutiny of these trips, Maloney faced criticism from the head of the Texas Democrat over the DCCC’s decision to cut advertising buys in vulnerable south Texas Congressional districts because the DCCC didn’t have enough money.

“I’m really, deeply disappointed in the DCCC,” Texas Democratic Party Chair Gilberto Hinojosa said earlier in October. “I hope they change their mind, and if we lose this election, it’s completely on them.”

For its part, the National Republican Congressional Committee (NRCC) has also called out roasted Maloney for putting “his husband’s personal trainer on the government payroll.” An Oct. 3 New York Post report said that the congressman’s office and campaign paid more than $7,000 to the personal trainer of Maloney’s husband.

Marsh said that this type of behavior, whether from Democrats or Republicans, is what really boils voters, especially when things are so tough for many families.

“People are frustrated by what they see as corruption and incompetence in Congress and in the White House. They’re rejecting it, particularly when they’re experiencing such difficulty and uncertainty about the future,” he said.

Marsh said that this year people aren’t distinguishing between hard corruption that personally enriches somebody and the soft corruption that he’s referring to—where politicians ignore what’s in the best interest of their voters to pursue ideological goals.

“Even if you assumed they were paying attention to things like inflation, crime, education and the border, would anyone in the White House or Congress be smart enough to do anything to fix them,” he said.

“I think the decision by most people is ‘no, they’re not that smart or good,’” said Marsh, who cited a series of missteps under the Biden administration that really became apparent with the withdrawal from Afghanistan.

Astorino projected that the GOP could flip as many as five seats in New York’s Congressional Districts this year.

A five-seat switch would make the Democrat to Republican split in the House 14 to 12 respectively in the 2022 Congress for the Empire State.

The current composition of New York’s House delegation is 19 Democrats to 8 Republicans.

“And that’s the problem for Maloney,” Morris said, noting Maloney has so many places he has to defend at once all across the country—including his own district.

This week the DCCC announced another $867,000 ad buy in the fight for Maloney’s seat.

That brings the total spent by Democrats to defend Maloney’s seat to $1.8 million by the DCCC, even as Maloney’s campaign has spent another $4,620,358, as of Oct. 1.

GOP Leader Kevin McCarthy has rubbed salt in Maloney’s wounds because he’s promised $4 million more for the race from his own super PAC, although it’s unclear how much of that has been spent so far.

The Epoch Times has reached out to the DCCC and Maloney’s campaign for comment.