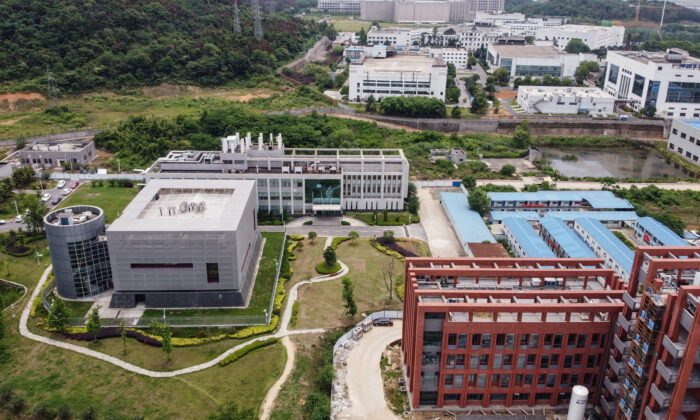 The P4 laboratory on the campus of the Wuhan Institute of Virology in Wuhan, China's central Hubei Province, on May 13, 2020. (Hector Retamal/AFP via Getty Images)
Democrats

House Democrats blocked consideration of legislation that would require the U.S. Director of National Intelligence to declassify information and data related to the origins of the COVID-19 pandemic and that namely targeted what role the Wuhan Institute of Virology played in the outbreak.

In May, the Senate Republican-backed COVID-19 Origin Act was passed unanimously in the Senate. Rep. Michael Burgess (R-Texas) brought the Senate bill to the House floor on Tuesday night before Democrats voted it down.

“The best disinfectant is sunlight and that’s what we can provide today,” Rep. Brad Wenstrup (R-Ohio), who helped bring the bill to the House floor, said of the proposal. “The bill first establishes that we must identify the precise origins of COVID-19 because it is critical for preventing a similar pandemic in the future.”

Wenstrup said that the measure is “not controversial by any means” and noted that “not one senator objected” to the legislation when it was up for consideration in the Senate in May.

According to the text of the bill, identifying the origin of COVID-19, caused by the CCP (Chinese Communist Party) virus, is crucial in preventing a similar pandemic in the future from occurring. The bill also noted that Director-General of the World Health Organization Tedros Adhanom Ghebreyesus even acknowledged in March that more investigation into the theory the virus leaked from a laboratory in Wuhan, China, is warranted.

Rep. Darin LaHood (R-Ill.), another co-sponsor, said Tuesday that the purpose of the bill would require the Director of National Intelligence’s office to declassify “any potential links between the Wuhan Institute of Virology” and COVID-19. In a tweet, LaHood said Democrats blocked their request.

The final vote on considering the measure was 216 against and 207 in favor.

House Democrats’ action came as CCP officials said they would not comply with a second World Health Organization probe into the pandemic’s origins. For months now, the Chinese regime has said the virus was first transmitted from an animal to a human at a Wuhan wet market, and they’ve denied the pathogen originated from the Wuhan lab.

“We have certainly seen the [CCP’s] comments, again, rejecting phase two of the WHO study. We are deeply disappointed,” Psaki said. “Their position is irresponsible, and frankly, dangerous. It’s not a time to be stonewalling.”

The Epoch Times has reached out to House Majority Leader Steny Hoyer’s (D-Md.) office for comment about Tuesday’s vote against the measure.