Matt Gaetz explains why he joined Democrats in opposition 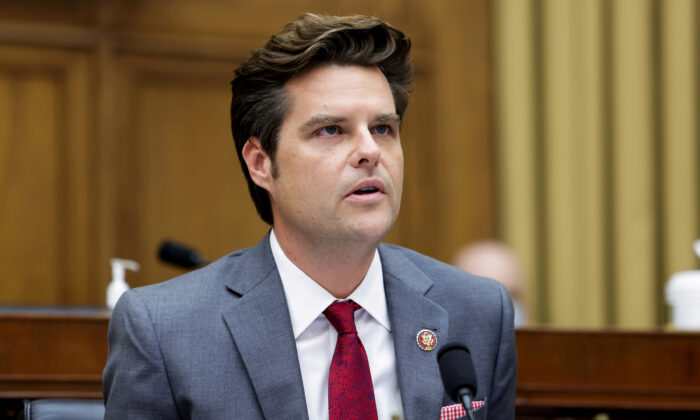 Rep. Matt Gaetz (R-Fla.) speaks during a hearing on Capitol Hill on July 29, 2020. (Graeme Jennings/Pool via Reuters)
By Nathan Worcester

Legislation promoting U.S. energy independence from Russia has been blocked by House Democrats.

House Republicans introduced the “American Independence from Russian Energy Act” on Feb. 28, a measure meant to authorize the Keystone XL pipeline, boost domestic oil and gas production, and prevent President Joe Biden’s executive branch agencies from halting energy leasing on federal land and water, among other provisions. Yet on March 1, the legislation was shot down in a 221–202 vote, almost entirely along partisan lines.

“Getting our pipelines expanded is huge,” Rep. Bruce Westerman (R-Ark.), ranking member of the House Natural Resources Committee and a co-sponsor of the measure, told The Epoch Times. “We’re having to import Russian energy to the New England states because we don’t have pipelines that can carry Pennsylvania natural gas up there.”

U.S. crude oil imports from Russia more than doubled in 2021, rising to an average of 209,000 barrels per day from a daily average of roughly 76,000 per day barrels in 2020, according to data from the Energy Information Administration (EIA).

Raúl Grijalva (D-Ariz.), chair of the House Natural Resources Committee, didn’t respond to a request for comment by press time on his choice to vote down the legislation.

Republicans on the floor voiced near-unanimous support for the measure, with Rep. Tom Cole (R-Okla.) describing U.S. reliance on Russian oil and petroleum products as “unconscionable.”

By contrast, Rep. Jim McGovern (D-Mass.) said Republicans “talk about energy independence, yet … are the ones who have consistently voted against and opposed green and renewable energy here at home, which is the fastest way to achieve real energy independence.”

The 220 Democrats who voted the legislation down were joined by Rep. Matt Gaetz (R-Fla.), who said the measure could open up the northwest Florida coast to drilling, potentially impeding military testing and related missions that take place east of the Military Mission Line.

Westerman told The Epoch Times that Gaetz’s objection was a “totally illegitimate concern.”

“I don’t know where he got the misinformation, but it talks about the Western Gulf [of Mexico],” he said. “It is not going to allow drilling around Florida.”

A spokesperson for Gaetz explained the congressman’s concerns to The Epoch Times.

Although the bill doesn’t specifically authorize drilling near Gaetz’s district, it keeps the president and his cabinet from freezing the new drilling lease sales on federal land or water. Any withdrawal of those federal holdings from drilling would have to be authorized by Congress.

The spokesperson said this language could be used to undermine a September 2020 memorandum from then-President Donald Trump extending the drilling moratorium off Florida’s northwest coast until 2032.

“The Congressionally approved moratorium is set to expire in June of 2022,” the spokesperson said, referring to the original Gulf of Mexico Energy Security Act that made the area off-limits for drilling.

“It would be foolish to respond to Russia’s aggression by rendering America less capable to defeat Russia or anyone else,” the spokesperson said. “Protecting the Gulf Test Range is in America’s best interest.”

The spokesperson told The Epoch Times that Gaetz is on record as favoring more U.S. energy production to undercut Russia, drawing attention to a passage in Gaetz’s 2020 book, “Firebrand”:

“Asia’s largest consumer of energy, China, is right next to Asia’s largest producer, Russia. They are building bridges to one another that could well imperil the free world.

“We can beat Russia and other fossil fuel foes just by keeping the price of oil perpetually low.”

Westerman, who said he supports an “all of the above” energy strategy that includes oil, gas, nuclear, solar, and wind, pointed out that greenhouse gas emissions fell during the Trump administration.

“I don’t think Putin gives a rip about environmental goals, or anybody’s economy other than his own,” he said.

The legislation instructs the secretary of the interior to immediately restart the oil and gas lease sales required by the Mineral Leasing Act, which Biden first froze through Executive Order 14008 in January 2021.

In addition, it specifically instructs the secretary to hold at least four oil and gas lease sales in Wyoming, New Mexico, Colorado, Utah, Montana, North Dakota, Oklahoma, Nevada, and “any other state in which there is land available for oil and natural gas leasing under the [Mineral Leasing] Act.”

The Epoch Times has reached out to three key bureaus and agencies of the Interior Department involved in mining and drilling authorization—the Bureau of Land Management, the Ocean Energy Management Bureau, and the Office of Surface Reclamation and Enforcement—but didn’t receive a response by press time.

“Democrats blocking the Act yesterday from even being considered demonstrates how unserious they are about truly addressing the crisis in Ukraine,” Kathleen Sgamma, president of the Western Energy Alliance, a nonprofit energy industry association, told The Epoch Times in an email.

“We have the energy resources to starve Putin of revenue and lower prices for Americans if the president would just take action within his power now. For example, the government is holding up hundreds of federal permits in the Permian Basin, America’s most prolific oil region. Most are ready to go but are being held up for more climate change analysis.”

Representatives for the U.S. branch of Fridays for Future, the international climate movement started by Swedish teenager Greta Thunberg, didn’t respond to a request for comment on the legislation by press time.