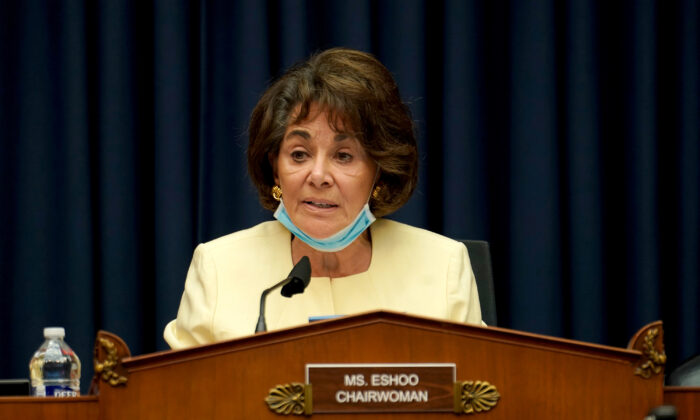 Chairwoman Anna Eshoo (D-Calif.) gives her opening statement during a House Energy and Commerce Subcommittee on Health hearing to discuss protecting scientific integrity in response to the CCP virus outbreak on Capitol Hill in Washington on May 14, 2020. (Greg Nash/Pool via Reuters)
Democrats

Reps. Jerry McNerney (D-Calif.) and Anna G. Eshoo (D-Calif.) sent a dozen letters to 12 different carriers this week urging them to deplatform or otherwise take action against Fox News, Newsmax, and One America News for allegedly spreading misleading information about the Jan. 6 Capitol breach and the COVID-19 pandemic.

They pointedly asked the carriers if they were planning on carrying the networks “both now and beyond any contract renewal date.”

“That’s not a question. That’s a threat,” Dershowitz said. “And that comes within the First Amendment, and I think there is room for a potential lawsuit for declaratory judgment at least, saying that Congress has no authority to tell or suggest or imply to cable operators that they should take people off the air as the result of content. That would violate the First Amendment.”

The offices of Eshoo and McNerney haven’t returned requests for comment.

The letters were sent in advance of a House Energy and Commerce subcommittee hearing titled “Fanning the Flames: Disinformation and Extremism in the Media.”

Eshoo told the hearing that the First Amendment “prohibits Congress from enacting laws abridging the freedom of speech, and I’m an ardent supporter of it.

“It does not, however, stop us from examining the public health and democratic implications of misinformation,” she added.

Lawmakers heard from Emily Bell, director of the Tow Center for Digital Media at Columbia University, who claimed that Newsmax and One America News “showed themselves willing to continue to repeat false narratives about the legitimacy of the election result.”

They also listened to Jonathan Turley, a George Washington University law professor, who called the deplatforming push similar to the “Red Scare” seen during the Cold War, when anyone suspected of being communist sympathizers were targeted.

Ranking Member Cathy McMorris Rodgers (R-Wash.) criticized the letters as an attack on the First Amendment.

“Anyone who values free speech and a free press should be alarmed by these actions today,” she said. “It’s an attack on the First Amendment when public officials use their power to coerce private companies to censor and silence viewpoints they don’t agree with.”