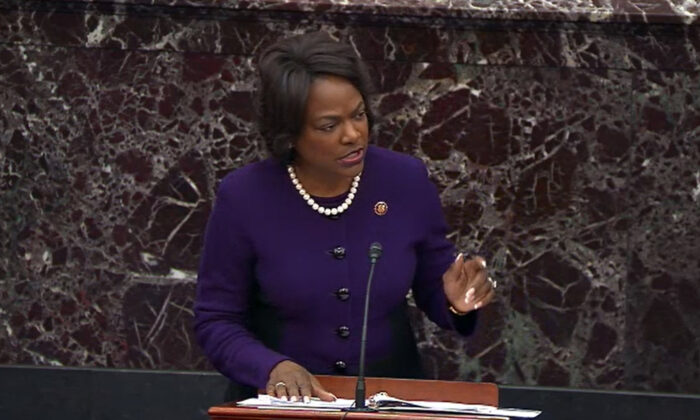 In this screengrab taken from a Senate Television webcast, House manager Rep. Val Demings (D-Fla.) speaks during impeachment proceedings against then-President Donald Trump in the Senate at the U.S. Capitol in Washington on Feb. 3, 2020. (Senate Television via Getty Images)
US

House Democrat Found Way to Be in Two Places at Once; Watchdog Files Ethics Complaint

Rep. Val Demings (D-Fla.) is among the busiest people in the nation’s capital, being both a member of the House of Representatives and a Senate candidate, but during a recent congressional hearing she thought she had found a way to be in two places simultaneously.

Demings attended an April 5 hearing of the House Judiciary Committee virtually, as allowed under rules adopted at the outset of the CCP Virus Pandemic in 2020. Those rules made it acceptable for a House member suffering from the virus or having been recently exposed to it from participating in hearings virtually.

The purpose of the hearing was a markup session on the proposed Domestic Terrorism Prevention Act.

The judiciary panel adopted some amendments to the text, then forwarded the proposal for consideration by the House Committees on Armed Services and Homeland Security. The proposal remains pending a floor vote by the full House.

During the same April hearing, however, Demings was also attending another event via the internet, one in which she was addressing supporters of her campaign to be the Democratic nominee to oppose Sen. Marco Rubio (R-Fla.) on the November ballot.

The campaign event was a caucus of Duval County Black Democratic Caucus. At one point, Demings pauses, apologizes to those attending the caucus and votes in the hearing.

Her remarks to the caucus were picked up on the hearing audio, with a result that she was asked by the committee chairman to inform her that she was not muting her caucus remarks.

That’s a no-no under multiple House rules, according to the Foundation for Accountability and Civic Trust (FACT), a non-profit government watchdog group, which filed a complaint with the House Office of Congressional Ethics earlier this week.

“The ability to virtually attend committee proceedings was put in place so the House could continue conducting necessary business during the public health emergency and for no other reason,” said FACT executive director Kendra Arnold in a statement announcing the complaint.

“However, Rep. Demings’ dual attendance at the events suggests that she chose to virtually attend the committee hearing, not for reasons related to COVID-19, but rather to speak at a campaign event,” Arnold said.

“Her campaigning during an official House proceeding also apparently violates the separation between official government business and political activity required under the ethics rules.

“We encourage the Office of Congressional Ethics to immediately investigate Representative Demings and impose the proper penalties if found guilty,” she said.

A spokesman for Demings in her Capitol Hill office did not respond to The Epoch Times’ request for comment.

The complaint filed by FACT notes that, “House ethics rules require members to ‘conduct themselves at all times in a manner that reflects creditably on the House.’ This is a broad and ‘comprehensive provision’ that is applied to any conduct taken in a member’s official capacity.

“For example, members have been investigated and disciplined under this rule related to ‘making statements that impugned the reputation of the House’ and ‘making false statements to the [ethics] committee.’

“In addition, members are required to adhere both to the spirit and the letter of the House ethics rules, and thus they must read all the rules and ethical requirements broadly.

“This includes the House rules adopted ‘to ensure Congress can continue legislation during COVID-19,’ under which members are only permitted to vote by proxy and attend committee proceedings virtually when needed because ‘a public health emergency due to a novel coronavirus is in effect.’

“Finally, the House ethics rules require strict separation between campaign and official acts. This rule is applicable to every type of official activity, for instance a member cannot campaign from government buildings, use official resources for campaign purposes, or have any political information on official social media pages or websites.”

Demings was first elected to the House in 2016 after a long career with the Orlando Police Department, including tenure as Chief of Police. She represents the 10th congressional district, which includes nearly equal portions of white, black and Hispanic voters.

Rubio was first elected to the Senate in the 2010 Tea Party flood that put Republicans in the majority in the House and almost did so in the Senate as well. Rubio was re-elected in 2016 after an unsuccessful run for the Republican presidential nomination.

The FACT website describes the group as “a nonprofit 501(c)(3) organization dedicated to promoting accountability, ethics, and transparency in government and civic arenas by hanging a lantern over public officials who put their own interests over the interests of the public good.”