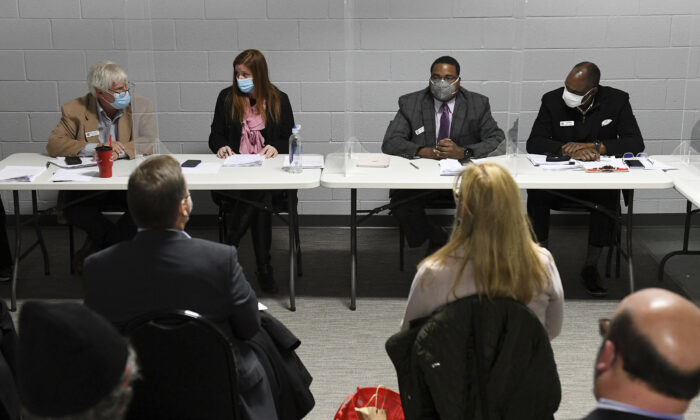 William Hartmann felt like he was stuck in a “Mission Impossible” movie when he left a Wayne County Board of Canvassers meeting in Detroit in November.

Law enforcement advised him not to return home and instead escorted him, with just the clothes on his back, to a friend’s house for safety.

“I was scared,” Hartmann told The Epoch Times. “[The police] actually had people stationed outside in different locations, watching, in case anything happened. They were there for three or four days.”

Hartmann said he didn’t venture outside for a week.

“I was afraid that somebody might recognize me when I was out and want to beat me up,” he said.

Hartmann was one of two Republican members of the Wayne County Board of Canvassers who initially refused to certify the election results due to imbalances in the numbers.

Hartmann and Monica Palmer deadlocked the certification in a 2–2 vote on Nov. 17, which resulted in a swift and hostile reaction from Democrats and community leaders over Zoom.

The two were called a “disgrace” by Rev. Wendell Anthony, a pastor and head of the Detroit branch of the National Association of the Advancement of Colored People, The Associated Press reported.

“You have extracted a black city out of a county and said the only ones that are at fault is the city of Detroit, where 80 percent of the people who reside here are African Americans. Shame on you!” Anthony said.

Ned Staebler, a vice president at Wayne State University in Detroit, said, “The stain of racism that you, William Hartmann and Monica Palmer, have just covered yourself in is going to follow you throughout history.”

Both Hartmann and Palmer changed their votes later that night after they were assured the state would allow an independent audit to be performed. The results were certified, although the two still haven’t officially signed the certification. The next day, Michigan Secretary of State Jocelyn Benson said the independent audit wouldn’t proceed.

“The news media went to my house and filmed the front of my house and my address,” Hartmann said. “And then my website was doxxed. And I got over 1,500 hate emails. And you got to then throw social media on top of that.”

He didn’t receive any explicit death threats, but was told to “burn in hell” many times, he said.

Hartmann worked with a friend to retrieve some clothes and his computer from his home.

“He arranged with the local police department to have an unmarked van and a couple police cars go to my house. I gave him the key and I stayed in a remote location and we communicated using FaceTime … and I told them what to get,” Hartmann said.

“So they did that. And then, the police cars sort of blocked in the news media vans. And then the other van—they had taken the license plates off just so that they couldn’t be tracked down—and that drove different ways till they got to where I was. And then I got all my stuff and I drove back to where I was staying.”

Hartmann said the tenant in his duplex also was forced to go live with her sister for a while.

He’s back home now, but the police still conduct regular drive-bys, he said.

After the initial drama, Hartmann is still trying to get his head around the discrepancies. He said he didn’t vote to certify the results initially because close to 71 percent of Detroit’s Absent Voter Counting Boards didn’t balance between the machine count and the paper ballot count, and no explanation was provided as to why (in what he called an over/under report).

For example, an undercount of one means there is one less paper ballot than the machine total and the explanation may be that a ballot was destroyed but it wasn’t recorded in the poll book, Hartmann said. Any discrepancy without an explanation cannot be counted in a recount and the machine tally has to be used, he said.

“It’s when you have overs—you have more voters voting than you have voters in the precinct—that doesn’t make any sense to me,” he said. “How did that happen? Nobody can give you an answer.”

He’s decided to undertake his own investigation and has a team of volunteers helping.

He has had to submit Freedom of Information Act (FOIA) requests to obtain the over/under reports from each of the 1,115 Wayne County precincts—information that he says should be given to Board of Canvassers members with a simple request.

But, aside from the Detroit data, his FOIA requests have so far been ignored. Wayne County Clerk Cathy Garrett didn’t immediately respond to a request for comment from The Epoch Times. The county clerk oversees the Board of Canvassers’ budget, although the board doesn’t answer to the clerk.

Benson, a Democrat, called the discrepancies in the county “bookkeeping errors” on Nov. 18.

On Dec. 1, the Michigan Bureau of Elections, which is overseen by Benson’s office, issued a memo directing county clerks to delete Electronic Poll Book software and files contained on laptops and USB drives used during the election.

The Michigan state legislature on Dec. 15 granted the state’s Senate and House Oversight Committees the power to issue subpoenas to further investigate allegations of voter fraud in the cities of Detroit and Livonia.

According to the subpoenas obtained by The Epoch Times, the two county clerks will have to surrender hard drives, emails, absentee voter counting board laptops, and other election-related material by Jan. 12, 2021.

“I expect it would be impossible to have a substantive conversation about advancing election legislation if its participants continue to claim recent meetings with long-dead Latin American leaders and other fantastical fabrications are somehow connected to how Michigan citizens exercise their right to vote,” she said in a Dec. 15 response to the request.

Michigan, with its 16 electoral votes, is one of seven states that has produced a slate of Republican dueling electors that Congress will count in a joint session on Jan. 6, presided over by Vice President Mike Pence.

Lawyer Sidney Powell has filed a petition to the U.S. Supreme Court on behalf of a group of Michigan Republicans alleging “massive election fraud” and violations of the state election code in the Nov. 3 election.

The original suit claims that fraud took place through a “troubling, insidious, and egregious ploy” of ballot stuffing, which gave Biden a lead in the state. The fraud allegedly was rendered invisible through the help of election software and hardware from Dominion Voting Systems, the lawsuit claims. Plaintiffs in the civil action are six registered Michigan voters and nominees of the Republican Party to the Electoral College.