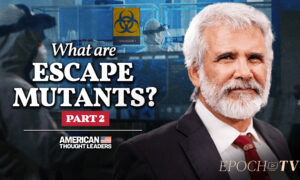 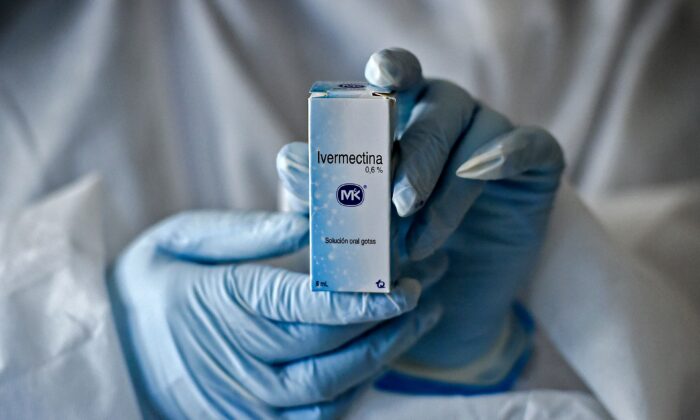 A healthcare worker holds a bottle of ivermectin in Colombia on July 21, 2020. (Luis Robayo/AFP via Getty Images)
US News

A judge in Ohio on Monday said a hospital can’t be forced to give ivermectin to a COVID-19 patient, a reversal of a previous order.

The wife of Jeffrey Smith, a 51-year-old being treated in West Chester Hospital since mid-July, did not provide “clear and convincing evidence” to support her lawsuit against the hospital, Butler County Common Pleas Court Judge Michael Oster Jr. ruled.

Julie Smith, the wife, sued last month, arguing that the hospital should administer ivermectin to her husband because it was prescribed by a doctor, Dr. Fred Wagshul. Doing so has “minimal downside and side effects,” she said in the lawsuit.

The hospital refused, despite Julie Smith offering to sign a release that would have absolved the hospital from any liability in administering the medicine.

Butler County Common Pleas Judge Gregory Howard ruled recently that the hospital must give 30 milligrams a day to Jeffrey Smith, who was on a ventilator after testing positive for COVID-19.

But the order was temporary in nature, only lasting for 14 days.

Oster, presented with a motion for a more permanent ruling, said he did not think Julie Smith met her burden of proof in the matter.

The medical and scientific communities don’t support treating COVID-19 with ivermectin, an antiparasitic drug, the judge wrote, citing statements from, among others, the Food and Drug Administration and the American Pharmacists Association. Some doctors do support using the drug against COVID-19 and studies that appear to show its efficacy were limited and inconsistent, he added, writing that “based upon the evidence, it has not been shown to be effective at this juncture.”

In addition, the plaintiff hasn’t shown that irreparable injury will occur without another order forcing the hospital to administer ivermectin, the judge said.

“If it is not an effective treatment, then this court cannot find by clear and convincing evidence that an irreparable injury will occur without the injunction,” he wrote.

Wagshul, the doctor who prescribed the drug, told the court during a recent hearing that Jeffrey Smith “seems to be” getting better after receiving ivermectin. He also said that “I honestly don’t know” if further use would benefit the patient.

“As a citizen, it would be easy to think about wanting to help someone in Jeff Smith’s condition, no matter the law. As a judge, the present case invites allowing emotions to steer one towards judicial activism. However, our legal system must stay firmly rooted in proper legal interpretation of the law, not what individual judges think the law should be. This Court is called upon to make its ruling irrespective of all sympathy, passion, or prejudice,” Oster wrote.

He referenced how the late Supreme Court Justice Antonin Scalia was clear that he abhorred the burning of the American flag, but twice ruled in favor of the right to burn the flag.

The judge also said that Julie Smith could get her husband admitted to a different hospital where Wagshul has privileges, which would enable continued use of ivermectin.

The ruling came in response to an emergency motion for a preliminary injunction.

A spokeswoman for University of Cincinnati Health, which runs West Chester Hospital, said in a statement to news outlets that the ruling was “positive in support of respect for science and the expertise of medical professionals.”

Ralph Lorigo, one of Julie Smith’s lawyers, told The Epoch Times that the patient’s condition improved during the time he received ivermectin.

“The ivermectin has done enough good. Thirteen days worth of ivermectin is a very good supply,” Lorigo said. “We’re hopeful that that could turn the tide” and get Jeffrey Smith off the ventilator.

Lorigo said he would advise the plaintiff not to appeal the decision because it would take time.

Hai Li contributed to this report.