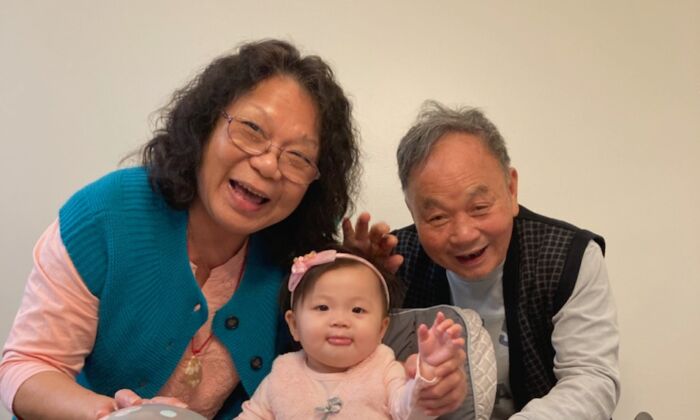 In happier times: Sun Ng of Hong Kong with his wife and new baby granddaughter in October 2021 before his COVID-19 diagnosis. (photo courtesy of Man Kwan Ng)
CCP Virus

An Illinois hospital defied an emergency court order over the weekend, refusing to allow an unvaccinated outside physician to administer the cheap drug ivermectin to a COVID-19 patient who was dying while being treated with expensive remdesivir, before finally relenting after being scolded by a judge.

Some other hospitals have been ordered by courts to allow the drug to be used.

The legal fight in the Illinois state court system comes as studies continue on the effectiveness of ivermectin in treating COVID-19. The costly drug remdesivir has been given emergency use authorization by the U.S. Food and Drug Administration for treating certain categories of patients hospitalized with COVID-19.

Sun Ng, 71, who was visiting the United States from Hong Kong to celebrate his granddaughter’s first birthday, became ill with COVID-19 and was hospitalized at Edward Hospital in Naperville, Illinois, on Oct. 14. His condition worsened dramatically and he was intubated and placed on a ventilator a few days later.

Ng’s daughter, Man Kwan Ng, who holds a doctorate in mechanical engineering, did her own research and decided her father should get ivermectin, which some medical doctors believe is potentially effective against COVID-19.

But against the daughter’s wishes, the hospital refused to administer the drug, and denied access to a physician willing to administer it. The daughter, who holds power of attorney to make medical decisions on her father’s behalf, hired Chicago law firm Mauck and Baker and New York law firm Parlato Law, which is handling ivermectin litigation throughout the United States.

Attorney Kirstin M. Erickson of Mauck and Baker said the case “is about a daughter who wants to save her dad’s life.”

“Ivermectin has been highly effective and used in humans for over 30 years,” she told The Epoch Times. Resistance to its use is because “it’s not part of the, quote, standard of care in hospitals.”

“They’ve given him the treatment they give at the hospital, which is remdesivir, and that was ineffective, and he’s been on the ventilator for almost three weeks now,” the lawyer said.

“What I’ve learned in these cases is that ivermectin costs between $1 and $3 a pill, where something like remdesivir is $3,000” per dose, she said.

“There could be some financial backing here, politically, other things motivating it,” Erickson said. “I don’t know what it is.”

The daughter went to court on her father’s behalf.

On Nov. 1, Judge Paul M. Fullerton of the Circuit Court of DuPage County granted a temporary restraining order requiring the hospital to allow ivermectin to be given to the patient.

The daughter, an only child, had been denied access to her father, but at some point the same week, the hospital allowed her to see her father, Erickson said.

Although the hospital had been claiming the patient was doing well, it was clear he wasn’t, the lawyer said, so the daughter took a picture of her desperately ill father on Nov. 4 and showed the graphic photograph to the judge to drive home the need for a new treatment plan.

At an evidentiary hearing before Fullerton on Nov. 5, it was pointed out that the preliminary injunction that the daughter was seeking was an extraordinary remedy. The judge said he agreed.

“I can’t think of a more extraordinary situation than when we are talking about a man’s life,” Fullerton said, according to court records.

Ng was admitted Oct. 14 and went on a respirator around Oct. 18, the judge recounted.

“There is no dispute from the testimony of the doctors … that his risk of dying is over 50 percent.”

One physician testified that someone in Ng’s situation, which the judge described as “basically on his death bed,” has only a 10 to 15 percent of survival, the judge said.

Ivermectin “is not an FDA approved drug [sic],” Fullerton said.

In fact, ivermectin is approved for human use by the FDA, but not against COVID-19.

Certain formulations of ivermectin “are approved in the U.S. to treat or prevent parasites in animals. For humans, ivermectin tablets are approved at very specific doses to treat some parasitic worms” and other ailments, according to the FDA’s website.

Although “currently available data do not show ivermectin is effective against COVID-19,” there are clinical human trials in progress.

Ivermectin can have minor side effects such as dizziness, itchy skin, and diarrhea at the dosage suggested for Ng, Fullerton said, but the “risks of these side effects are so minimal that Mr. Ng’s current situation outweighs that risk by one-hundredfold.”

The judge issued a preliminary injunction on Nov. 5 directing the hospital to “immediately allow … temporary emergency privileges” to Ng’s physician, Dr. Alan Bain, “solely to administer Ivermectin to this patient.”

Bain has treated many COVID-19 patients with ivermectin. Asked if the drug was responsible for saving the life of a specific patient he had successfully treated, he told Trial Site News in June: “I believe it had a very strong impact. It was a good addition to everything else. Ivermectin is the real deal.”

The hospital resisted the order on Nov. 6 and 7, denying Bain access to his patient. The hospital claimed it couldn’t let Bain in because he was not vaccinated against COVID-19 and that its chief medical officer wasn’t available to “proctor” Bain administering ivermectin.

The daughter’s lawyers filed an emergency report with the court early Nov. 8 and Fullerton heard briefly from both sides. The judge admonished the hospital and restated that it must allow Bain inside over a period of 15 days to do his job. When the hospital filed a motion to stay the order, Fullerton denied it, again directing the facility to comply.

Erickson said Sun Ng is already improving with ivermectin treatment. Ng passed a 60-minute breathing test that he could only previously tolerate for five minutes, she said.

“There’s been improvement already, and we’re hoping for full recovery as soon as possible.”

Erickson said she hoped Fullerton’s ruling “will encourage hospitals to modify their COVID-protocols to incorporate more innovative drugs like ivermectin so that more lives are saved.”

Joseph T. Monahan, the hospital’s attorney, didn’t immediately respond to a request by The Epoch Times for comment.