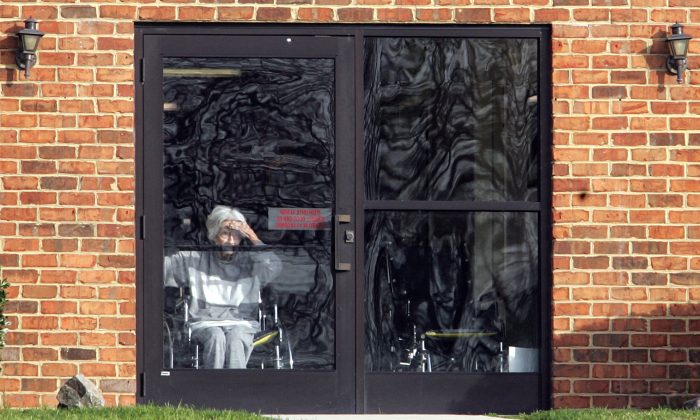 A resident pears out at of a nursing home in North Carolina in this file photo. (AP Photo/Jim R. Bounds)
Health News

Thousands of elderly Americans are beaten, underfed, or neglected in nursing homes around the country every year. But until now, neither they, nor their families, could sue for redress.

They gave up that right when they signed a stack of paperwork that included a clause that would force them into arbitration—which is private, confidential, and often favors the facility—should a dispute arise.

A new rule issued by the Department of Health and Human Services prohibits binding arbitration clauses in any long-term care facility that accepts Medicare or Medicaid. Now, consumers have the option to file a lawsuit.

“It prevents nursing facilities from taking advantage of people on the front end and having them sign things when they’re thinking about everything other than arbitration,” said Eric Carlson, directing attorney for Justice in Aging, a nonprofit that fights senior poverty through law.

“When someone’s entering a nursing facility, they’ve got enough to worry about,” he said.

The new rule is part of a larger revamp of consumer protections by the Center for Medicare & Medicaid Services (CMS), which goes into effect on Nov. 28. It impacts admissions agreements going forward; current agreements will stand.

More than 1.35 million people were living in nursing homes in 2014, according to the Centers for Disease Control and Prevention.

“The public will have more ability to examine nursing homes and their records for abuse and neglect,” Brown said. “That makes everyone safer.”

For Brown, the issue is personal too. His grandfather was admitted to a nursing home to receive treatment for a blood disorder. After only two weeks there, he was found dead—but the cause of death was unrelated to his medical condition, according to an account on Brown’s company website.

Brown said his firm receives “hundreds and hundreds” of abuse cases every year.

In 2014, 14,258 complaints involving abuse, gross neglect, or exploitation at nursing homes were reported to the federal government’s Administration for Community Living ombudsman programs.

“Evidence shows that abuse in institutions is extensive and alarming,” the report said.

The most cited problem is inadequate staffing.

“It is often asserted that the quality of care in nursing homes is impaired because staffing is inadequate, staff is insufficiently trained, and turnover is high, especially for certified nurse assistants,” the CMS stated in a 2015 report.

Brown said lack of staff is behind most of the complaints his firm sees, too.

The coalition is involved mostly in policy, but also provides training to families on how to navigate the law around long-term care.

Mollot said when he started talking to family members, many of them got angry at him. “Their experience in their nursing home is so different from the rights that residents have under federal law.”

Family members had come to accept care that was substandard, and oftentimes abusive or neglectful, he said.

Mollot said the lack of oversight in nursing facilities is a huge problem and the new CMS rule allowing consumers to sue should provide more transparency.

People often don’t sue “unless it’s something horrific,” he said. “And even then, people generally want to make it go away. … They don’t want to go through that.”

Mollot dismisses the industry’s criticism that the option to sue will just make lawyers rich. Whether that’s true or not, the benefit is that now there will be lawyers alerting people to what is going on.

The forced arbitration law change was only a small part of the 713-page regulation document that the CMS released. Much of the document focuses on quality of care and the rights of residents based on the Nursing Home Reform Law from 1987.

Mollot said the whole document is a positive move.

6.2 million = People over 85 with severe or moderate memory impairment by 2050, up from 1.6 million currently

The following are comments from Justice in Aging’s about some major areas of long-term care, as related to the new CMS document.

Although inadequate staffing is the greatest problem in nursing facilities today, the new regulations do not include a minimum staffing standard or a requirement for a 24-hour Registered Nurse. Instead, the new regulations continue current policy: requiring “sufficient” staffing levels, and registered nurse presence for eight hours daily. However, staff must have “appropriate competencies and skills sets,” and staffing levels must take into consideration the number, acuity and diagnoses of the resident population, based on a newly mandated facility assessment.

For the first time, the regulations define person-centered care and require that facilities learn more about who the resident is as a person, provide greater support for resident preferences, and give residents increased control and choice.

Provisions related to abuse, neglect and exploitation are now included in a separate section, which brings more attention and focus to these issues. New protections include prohibiting licensed individuals with a disciplinary action from being hired and requiring that suspicion of a crime be reported to law enforcement and the state survey and certification agency.

Many residents with dementia are inappropriately given harmful antipsychotic drugs, despite strong current federal rules. The new regulations water down existing protections by folding antipsychotic drugs into a broader category of psychotropic drugs and moving them from quality of care regulations to pharmacy services.

Training requirements have been expanded to apply to all staff, contractual employees, and volunteers.  Mandatory topics  include communication, residents’ rights, and abuse, neglect and exploitation. Certified nursing assistants will be required to receive training on dementia management and resident abuse prevention.

The new regulations specify that transfer-discharge for non-payment is inappropriate when the resident has submitted necessary paperwork to a third-party payor (such as Medicaid), and that payor is now evaluating the claim for payment. Also, facilities now will be obligated to send a copy of each transfer-discharge notice to the state’s long-term care ombudsman program, which is available to advise the resident.

Modifying Residents’ Rights to Have Visitors:

The new regulations continue current law providing each resident with a right to receive visitors at any time. In an unwelcome change, however, if a visitor is not a family member, the right to receive a visit now is “subject to reasonable clinical and safety restrictions,” as set forth in facility policy.

Far too often complaints from residents and families have been dismissed or not taken seriously. The regulations will now call for facilities to have a grievance policy and a grievance official to oversee the grievance process. Complainants will receive a written grievance decision that includes the steps taken to investigate, a summary of the finding or conclusions, a statement as to whether the grievance was confirmed or not confirmed , and the action taken or to be taken by the facility.