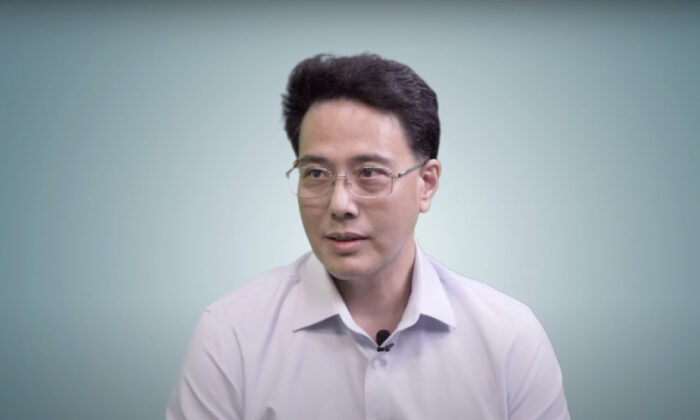 Dr. Lee Kin-yan, former director of the department of traumatology in Queen Elizabeth Hospital and honorary clinical associate professor of the Faculty of Medicine of the University of Hong Kong, introduced in the "Expert Talks Health" program of the Epoch Times. The three-in-one therapy for pelvic fractures pioneered by Queen Elizabeth Hospital reduced the mortality rate of the injured from 60 percent down to about 12 percent. (Adrian Yu/The Epoch Times)
Health

Jumping off from buildings, industrial accidents or traffic accidents often result in pelvic fractures that cause death. Dr. Lee Kin-yan, former director of the department of traumatology at Queen Elizabeth Hospital and honorary clinical associate professor of the Faculty of Medicine of the University of Hong Kong, presented in an exclusive interview with the Epoch Times and said that the “three-in-one” therapy for pelvic fractures pioneered by Queen Elizabeth Hospital, reduced the mortality rate of the injured from 60 percent to about 12 percent. This therapy is known internationally and is known as “Hong Kong’s Therapy.”

He and his team recently published a new book that shares the latest treatment in traumatology and clinical experience with the new generation of doctors.

​​In accidental trauma, pelvic fractures are known as “fatal fractures.” Dr. Lee said it is because there are many organs, arteries, and veins inside the pelvis. If only the pelvis is fixed with a stent, the pelvic cavity will continue to bleed, causing exsanguination to the injured.

Since the establishment of the traumatology team at the Queen Elizabeth Hospital in 1994, doctors have spent much time improving the first aid methods for patients with pelvic fractures and invented the “three-in-one” therapy.

Dr. Lee explained that the development of the “three-in-one” therapy took place over many years and was a three-stage process.

In the first stage, they used stents to fix the pelvis and started blood transfusion, but it could not stop the bleeding of the internal pelvic veins and arteries, and the mortality rate was 60 percent.

In the second stage, from 2000 to 2008, arterial embolization was introduced. After fixing the pelvis, the radiologist inserted a needle in the patient’s thigh and blocked the bleeding artery using an X-ray method. The mortality rate dropped to 45 percent.

“Starting from 2008, medical students learned packing from overseas, and then the above steps were carried out at the same time with packing, the mortality rate was greatly reduced to 12.5 percent.” Dr.Lee says doctors of QE went overseas to learn the packing technique

“In overseas countries, “packing” is used [to stop the bleeding] when there is no other solution. For example, after using stents and arterial embolization, the patient’s condition continues to deteriorate, so they make an incision in the pelvis and stuff it with cotton. But very often this action is done too late. After we learned [about} packing, we discussed with the various departments of Queen Elizabeth Hospital, [to] let us do the three steps at the same time, [in] the same place, [on] the same table,” Dr. Lee said.

Dr. Lee emphasized that the essence of “three-in-one” is not to waste any time.

After using the “three-in-one” treatment, doctors found that the death rate of trauma patients has been significantly reduced, and severely traumatized patients who are originally fraught with risk can also be rescued.

The most impressive experience for Dr. Lee was a young man in his twenties who jumped off a building after taking ketamine.

That night, Dr. Lee received a call from Dr. Mina Cheng for help and rushed to the hospital. He found that the patient’s condition was very bad and there was no time for Computerized Tomography (CT) scanning, so he decided to go to the operating room immediately.

“The CT room has a nickname, called Tunnel of Death.” Dr. Lee explained that whenever a trauma patient comes to the A&E department, he has to make a quick decision whether to send him to the CT room or directly to the operating room. If the situation is very bad, and the blood pressure is very low, it would be terrible if the patient’s heart beating stops in the CT room.

After the young man was placed on the operating table, although CT scanning was not done, Dr. Lee could see that his abdomen was swelling up, and the ultrasound scan showed that there was blood in the abdomen, which was due to the pelvic fracture caused by jumping off a building. He explained that when a person falls from a height, the force rises from the feet to the pelvis and waist, causing the pelvis to fall apart.

“After opening the abdominal cavity, it was found that the liver was bleeding, so we plugged it with gauze. The three-in-one procedure was performed on the pelvis. This is now our standard procedure, including stenting, packing, and arterial embolization. The blood pressure was improved from unmeasurable to 80/40, and the pulse was still fast.”

The doctor then decided to try a new bypass method. A plastic tube for feeding babies was used to temporarily connect the blood vessels of the thigh. Once it was connected, the patient’s thigh became slightly warm, and then the patient was sent to the intensive care unit (ICU) for blood transfusion and ​​intravenous therapy.

Dr. Lee said that the practice of temporarily connecting the thigh with a plastic tube is “damage control.” Bleeding and the discharge of dirty things needed to be controlled. For example, if the intestine is broken, it is needed to fix it as soon as possible, but it should not take too much time.

“This patient was eventually rescued without having to amputate his leg or feet. Since he was young, when I saw him again, he used a walker to walk on his own.”

Dr. Lee said with deep emotions, “if there is no three-in-one therapy, no packing, no (bypass) tube, the patient is gone.”

After introducing the “three-in-one” therapy, the Queen Elizabeth Hospital team continued to collect data and publish papers to promote the therapy in Hong Kong and worldwide.

In 2013, they won an award when they went to Australia to publish their research results, and later they were invited to report at the headquarters of the American College of Surgeons. The “three-in-one” therapy was therefore recognized internationally and called “Hong Kong’s Therapy”.

The team in Queen Elizabeth Hospital also teaches “three-in-one” therapy in classes to train new surgeons and orthopedic surgeons, the therapy is now used in almost all hospitals in Hong Kong.

The reason why the Queen Elizabeth Hospital team could invent this method, Dr. Lee said, is because the Hospital has a complete range of departments, and A&E doctors, surgeons, orthopedics, radiologists, ICU doctors, and other doctors are cooperative, they always stand by, therefore the hospital has capabilities that other hospitals do not have.

The “three-in-one” therapy was not only created by him or Dr. Cheng alone but by the entire team at Queen Elizabeth Hospital.

During the launch of the new book, Dr. Lee said that the content of existing traumatology textbooks is outdated, and their new book aims to include the latest developments in the discipline. In addition to the “three-in-one” therapy, international experts in traumatology were also invited to write different chapters.

For severely traumatized patients, “three-in-one” therapy is the first step in the life-saving process, and many operations will be required afterwards.

Dr. Lee described that if trauma therapy is a football match, the “three-in-one” is a goalkeeper. After defending the goal, the ball is passed to the striker. And the striker is an orthopedic surgeon.

Severely traumatized patients can still experience many problems during their recovery. The patient is bedridden for a long time in the orthopedic ward after the stent is placed on the pelvis, which may cause pneumonia, venous embolism, pressure ulcers, and so on.

In recent years, the orthopedic team at the Queen Elizabeth Hospital has also applied many new methods to help patients recover as quickly as possible.

Dr. Lee said that in the past, major surgery which opens the pelvis caused huge wounds, but the current minimally invasive surgery uses CT navigation to fix the fracture and position with screws.

Patients have to stay in bed for at least three months after traditional surgery, but after minimally invasive surgery, patients bleed less, recover more quickly, and can move freely within a month.

However, the technique is not yet common, and Queen Elizabeth Hospital is one of the first two hospitals to apply the new method.

What Should I Do in An Accident?

In Hong Kong, most accidental traumas are blunt traumas, such as jumping off from heights, industrial accidents, and traffic accidents; puncture wounds, such as knife wounds and gunshot wounds, are relatively rare.

How should a similar traumatic accident be handled?

Dr. Lee suggested that there are ABCDE principles for handling trauma, which is A (Airway), B (Breathing), C (Circulation), D (Disability), and E (Exposure).

Take the concert accident as an example. The injured person was hit by a giant video screen and injured his cervical vertebrae. The medical staff needed to open his airway immediately.

Secondly, people should pay attention to the chest cavity, whether there are fractures, pneumothorax, or hemothorax.

The fourth step is to examine the condition of the brain and bones.

Finally, a full-body examination is done.

During the “golden first hour” after an injury, the above steps must be carried out in an orderly manner.

As for the general public, in the event of an accident, in addition to calling 999 for help, Dr. Lee reminded us that the most important thing is to protect the neck of the injured and not to move the person in order to avoid neck injury.