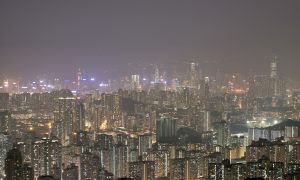 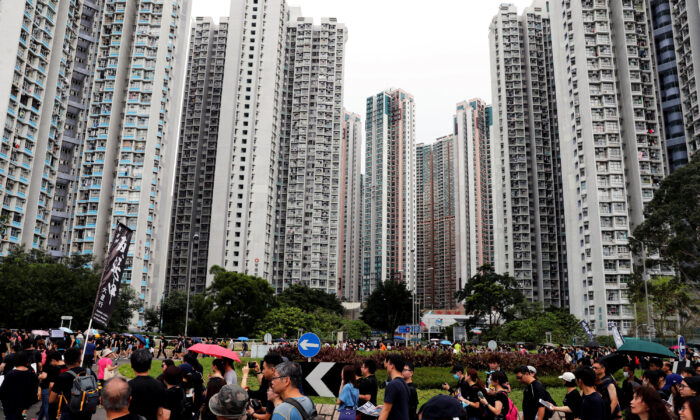 HONG KONG—While months of Hong Kong protests have scared away tourists, sent jitters across the financial center and cast a dark cloud over the local economy, there’s one thing residents of the city are confident they can bank on—sky-high property prices.

Home prices in the former British colony have rocketed over 200 percent in the past decade, driven by limited housing supply and large capital flows from mainland Chinese buyers, angering many residents who can’t afford to get on the property ladder.

And despite the worst protests since Hong Kong reverted to China rule, property prices have hardly budged.

Lily Chow, a 32-year-old clerk, is among the lucky ones. She and her husband recently snapped up a two-bedroom apartment off the plans for HK$7.5 million ($957,000) in the New Territories.

“I am not confident in the government, outlook or economy. I am only confident that Hong Kong property prices will not drop,” Chow told Reuters in the sales office of the development.

Property firm Wheelock has sold 80 percent of the 816 flats in its projects since late August, lower than sales at other launches this year, but “still good” given the current environment, property agents said.

As Hong Kong gears up for yet another anti-government protest on Oct. 1—the 70th anniversary of the Chinese Communist Party’s (CCP) takeover of China—there was scant sign the prospect of further violence had dampened homebuyer demand.

Hundreds of prospective buyers queued on Sept. 26 in a sales office in the gleaming International Commerce Centre (ICC) skyscraper for a development near Mong Kok district, the site of some of the most violent protests in recent months.

“The political environment is shakeable, but I am pretty sure the property market is unshakeable,” said office assistant Candy Lau, 32, as she queued for an HK$8 million, 273 sq ft, one-room apartment in the development by Sun Hung Kai Properties, Hong Kong’s largest developer by market value.

A week earlier, Sun Hung Kai launched its first batch of 352 flats in the same development in Kowloon district, selling all but one to underscore the strong demand.

A traditional belief in bricks and mortar investment and a history of strong returns from property has helped Hong Kong home buyers keep the faith.

Data released on Sept. 30 showed August house prices dropped 1.37 percent, which was within expectations, following a tiny 0.1 percent decline in July after the mass protests intensified in mid-June.

One reason for the smaller-than-expected drop in July was low transaction volumes, caused by a mismatch of price expectations between sellers and buyers.

But with signs sellers are now more willing to reduce their initial asking prices, volumes have stabilized, according to realtors.

“There’s still much real demand, and when sellers became more willing to cut prices by 10-20 percent, some buyers chose to enter the market,” said Derek Chan, realtor Ricacorp’s head of research. He estimates a 5 percent rise in prices for the full year, down from an earlier forecast of 10 percent.

Two other buyers told Reuters they expect home prices will climb in the long run, despite any short-term softness, because a fundamental supply shortage simply won’t go away.

Every day, Hong Kong grants 150 residential permits to mainland Chinese, according to the government, adding to a population of 7.4 million crammed into just 1,100 sq km (425 square miles), of which 40 percent is country parks or nature reserves.

Tiny living spaces have become increasingly common in the world’s most expensive property market where some of the city’s poorest people live in cage homes—wire mesh hutches stacked on top of each other.

Long-standing frustrations over unaffordable housing have spilled onto the streets during recent protests, which started over a now-suspended extradition bill and have evolved into calls for greater democracy, among other demands.

“7K for a house like a cell and you really think we out here scared of jail,” reads graffiti scrawled near one protest site. HK$7,000 ($893) is what the monthly rent for a tiny room in a shared apartment could cost in Hong Kong, which reverted from British to Chinese rule in 1997.

Making housing more affordable has been among every post-colonial Hong Kong leaders’ top priorities, but each administration has been unable to rein in skyrocketing prices that have fueled discontent in the city.

Sun Hung Kai Properties deputy managing director Victor Lui told an earnings conference this month that even though the company’s schedule for new launches was slightly delayed due to the protests, the company planned to keep pushing out new home sales in coming months.

He expects property prices to be flat for the full year.

Agents said the most sought-after properties are small to medium-sized apartments below 600 square feet, while the luxury segment continues to slow due to a drop-off in Chinese buyers and caution over the U.S.-China trade war.

Citi Hong Kong’s latest survey showed interest in property ownership in the third quarter–20 percent of respondents—was little changed from the preceding quarter, even though more respondents expected prices to fall than rise in the next 12 months.

Thanks to tighter debt servicing requirements in recent years, most home owners are expected to be able to continue meeting repayments even in the case of a big correction, avoiding systematic pressure, analysts say.

While JP Morgan predicts a 30 percent slide in prices in a worst-case scenario, many people remain confident in the market.

“The protests are only a small incident happening in Hong Kong,” said Josephine Tsang, a 57-year-old retired teacher, who recently bought an apartment for her 28-year old son. “If I don’t buy now, the price will keep rising.”

By Clare Jim and Felix Tam