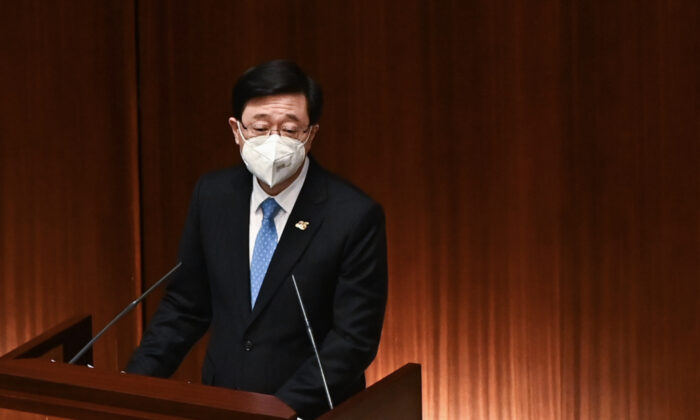 When Lee was asked by Chan Siu-hung, a member of the Legislative Council, about how the new government should deal with “foreign forces smears,” Lee said Hong Kong is “a man of virtue” and there are a lot of  “men of meanness” around the world, he said he would utilize whatever platform is available and send officials abroad to tell the amazing stories of Hong Kong to the rest of the world.

Wong Wai-kwok, former assistant professor of Politics and International Relations Department at the Baptist University of Hong Kong, believed that Lee was showing signs of incompetence and weakness in his response, “Lee said he would solve one problem a day since he took office. However, it’s more fitting to say he is making one joke a day.”

John Lee even boasted about his plans in an interview with a state media of the Chinese Communist Party (CCP), that he will show results during his term, and that he is dedicated to resolving Hong Kong issues. He said, “There are many problems in Hong Kong, but if I can solve one a day, then there will be 365 solutions in a year.”

As to whether, as an international city, it is appropriate to call world leaders “men of meanness,” Wong thought that the former Chief Executive of Hong Kong, Carrie Lam, had done enough damage during the 2019 anti-extradition protests, to prove that Hong Kong is no longer a global hub.

Wong then said, “CCP has been carrying out an aggressive style of  ‘wolf warrior diplomacy,’ and as now part of the CCP, the Hong Kong authorities will have to follow. If the regime wants to carry out a global propaganda campaign, Hong Kong is leashed. This, however, will only create more problems for Hong Kong and make the situation worse.”

Wong mentioned that there are quite a few officials who have been sanctioned in Lee’s office, such as Chris Tang Ping-keung, the current Secretary for Security. He doubts if any of these new officials would actually be allowed to enter foreign soil, and whether these officials would be welcomed for diplomatic visits or photo opportunities.

Wong added, since the anti-extradition protests in Hong Kong in 2019, the Hong Kong government wanted to “reconnect Hong Kong with the world,” and invited multiple world-renowned public relations agencies to bid for the contract of “Relaunch Hong Kong” publicity campaign. It was an attempt to whitewash the city’s negative image internationally, which was actually caused by police brutality and tyranny. Wong said, “Everyone knows John Lee is an incapable man who can’t do much, and won’t do much.”