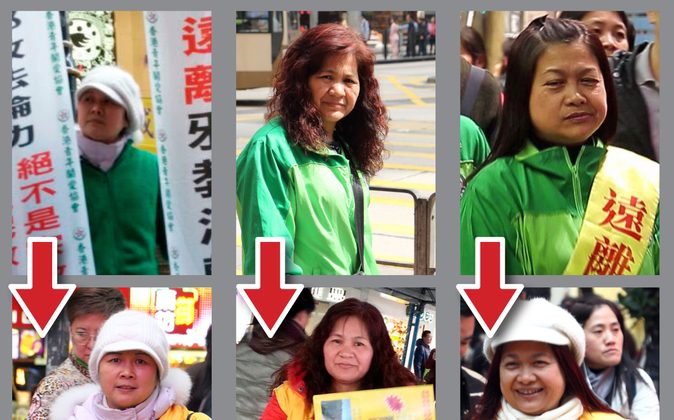 Leung Chun-Ying, the Chief Executive of the Hong Kong Special Administrative Region, functions as a political puppet for Jiang Zemin’s group, the former Chinese leader. Leung has manipulated several organizations, such as “Caring Hong Kong Power” and “Voice of Loving HK,” to pursue the political agenda of Jiang’s group.

Members of these organizations frequently use different identities and join different public events—sometimes they mingle with the Pan-democracy camp’s demonstrations to insult protestors, and at other times they openly voice their strong support for Leung. As Leung’s supporters, they’ve stood up against those protesting pro-China education, against Falun Gong supporters, and against free speech.

Those same members are also in the Youth Care Association.

According to previous Epoch Times reports, the HKYCA started harassing Falun Gong practitioners’ public efforts to expose the Chinese regime’s persecution of the group, at Causeway Bay in October 2013. But the HKYCA’s interfering actions were exposed, and the Hong Kong public were disgusted, so members of the association then started taking another approach.

On Feb. 14, two or three people from the HKYCA dressed in yellow clothing and disguised themselves as Falun Gong practitioners. While they shouted “Falun Dafa is good!” they distributed flyers to passers-by containing slanderous materials against Falun Gong.

When Falun Gong practitioners warned them to stop the illegal action, other members of the HKYCA at the site would jeer, making a scene, saying that Falun Gong is against its own people.

Taking matters into their own hands, Falun Gong practitioners collected photos of the association members before and after the disguise and placed them on posters. A Falun Gong practitioner who was part of the anti-persecution awareness efforts, aka, truth clarification, at Lok Ma Chau said that many Chinese tourists paid close attention to the posters. Some of them even checked the faces of the association’s members at the scene and compared them to the posters. Fearing being identified, the association’s members quickly left.

Ms. Liao, who coordinated Falun Gong truth clarification campaigns said that since the posters, the association has called off the disguise act for a while. But unfortunately, they are back to their old tricks instead—displaying big banners in front of the Falun Gong truth-clarification sites to block passersby from seeing the information.

On Feb. 24, Falun Gong’s truth clarification site at Mong Kok was blockaded by three pieces of six-meter-long banners deployed by the association.

But, the next day they were back at Mong Kok, dressed up in Falun Gong’s go-to yellow t-shirts, distributing defaming flyers against Falun Gong.