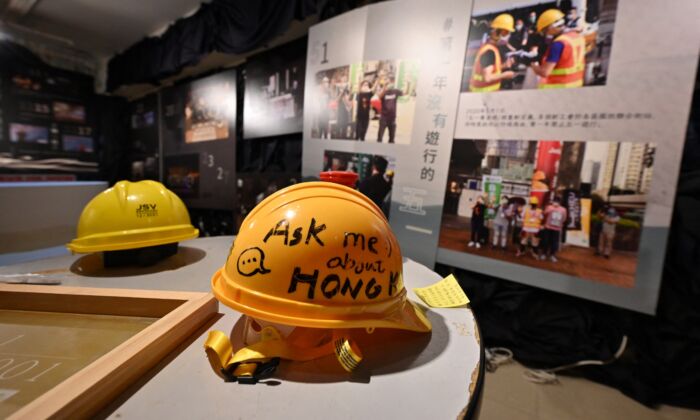 An exhibition of the Hong Kong Confederation of Trade Unions in Hong Kong on Sept. 25, 2021. (Peter PARKS/AFP)
HK Current Affairs

Hong Kong saw its largest pro-democracy trade union broken up on Oct. 3 under a deepened security law, despite the pro-Beijing government denying that it was clamping down on civil society.

The city has seen about 50 independent groups dissolved in 2021 alone.

The Hong Kong Confederation of Trade Unions (HKCTU) stated that 57 members voted in favor of dissolving the union and eight voted against, with two abstentions, fulfilling the four-fifths threshold for official disbandment, RTHK News reported.

The ceasing of operations comes under “political uncertainty,” said HKCTU Vice Chairman Leo Tang, who declined to elaborate on where the pressure came from.

Hong Kong Chief Executive Carrie Lam denied on Aug. 31 claims that the government is suppressing civil society, but said that it’s upholding national security. Yet, the HKCTU was one of several opposition groups targeted by local authorities.

The disbandment comes after the HKCTU announced in a statement that its members had received messages two weeks ago threatening their safety if the group wasn’t dissolved.

HKCTU Chief Executive Mung Siu-tat said on Facebook that he had resigned and fled Hong Kong. Co-founder Lee Cheuk-yan was sentenced in April to 14 months in jail for his role in anti-government protests in 2019.

Police also arrested HKCTU Chairperson Carol Ng on Jan. 6 amid the largest clampdown by authorities on the city’s opposition camp since the Beijing-decreed new national security law went into effect. Ng was alleged to have committed the crime of subverting state power.

Pro-Beijing media have suggested that the union was a “foreign agent” or “colluding with foreign forces”—punishable by up to life in prison under the national security law—due to its affiliation with the International Trade Union Confederation, an accusation both the HKCTU and the global group deny.

“Of course, it is a heartbreaking decision,” Tang said, stating that the spirit behind the independent labor movement in Hong Kong would live on.

At least 29 trade unions have dissolved since the start of 2021. Fears of falling foul of the law and facing terms of up to life in jail left civil leaders with no choice but to disband.

In the past two months, Hong Kong’s largest teachers union, representing more than 100,000 educators; the city’s main advocacy group for prisoners’ rights; and the Civil Human Rights Front, known for organizing massive pro-democracy rallies that once drew almost 2 million people in 2019, have all folded.

Observers say that number will continue to climb.

Yet, the Security Bureau of the city said any organization and its members remained criminally liable for offenses they had committed after disbanding.