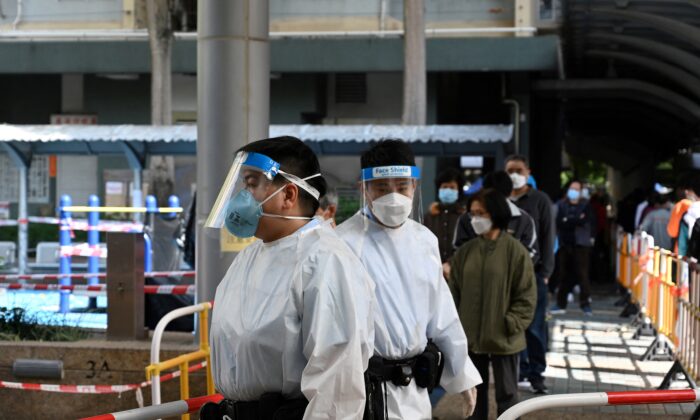 A growing number of European countries and Israel have started to remove COVID-19-related restrictions, including vaccine passports and safety mask mandates. Yet, Hong Kong still clings to its “zero-COVID strategy” with the aim of opening up quarantine-free travel to mainland China.

In late January, Hong Kong entered its fifth wave of COVID-19 outbreaks. On Jan. 27, Hong Kong set a one day record of 188 COVID-19 infections, followed by an average of over 80 daily cases for seven consecutive days. The new wave of infections forced officials to confront the efficacy of their stringent control measures.

Hong Kong Chief Executive Carrie Lam on the evening of Jan. 27, shortened the city’s notoriously strict 21-day quarantine for travelers to 14 days, extended the use of a vaccine pass for entry to restaurants and entertainment venues, and announced mandatory vaccination for elderly people applying to care home facilities, according to the South China Morning Post (SCMP).

The 2022 Business Sentiment Survey Report (pdf) released on Jan. 19 by the American Chamber of Commerce in Hong Kong weighs in on an array of issues facing Hong Kong, addressing business sentiments from both a personal and a company perspective.

The report indicates that the city’s top issues are the out-of-step travel measures compared with international practices, fraught U.S.-China relations, and the continuing challenges of the CCP virus pandemic.

Companies are delaying new investments and struggling to recruit executive talent to Hong Kong due to the hefty quarantine rules and travel restrictions, according to the report.

Additionally, foreign businesses said they felt less welcome in the city, and nearly 60 percent of respondents think the government is unconcerned and dismissive.

On Jan. 27, the same day as Lam’s press conference, Hong Kong’s best-known travel agency, Morning Star, announced its liquidation after 50 years of operation, according to local news reports. The company will hold its first creditors’ meeting on Feb. 16.

A large number of travel agencies in Hong Kong have folded since the pandemic, including Eastrip Travel and Wee Travel, two of the city’s leading tour operators.

President of the Hong Kong Federation of Restaurants, Simon Wong Ka-wo, which represents more than 8,000 eateries, said business during this year’s Lunar New Year period had dropped by 50 percent compared with past festivals, according to an SCMP report on Feb. 4.

On Jan. 25, Wong said that after the city government decided to extend the ban on dine-in services at restaurants, the catering industry business dropped by 40 percent in January, according to Taiwan’s United Daily News. He further predicted a wave of restaurant closures in March and April.

Tourism provides over 800,000 jobs in Hong Kong, both directly and indirectly. But due to Hong Kong’s stringent pandemic-control measures, the losses suffered by tourism-related industries such as retail and catering are incalculable.

On Jan. 27, Hong Kong’s Immigration Department released a work review for 2021, showing that about 90,000 tourists entered Hong Kong in 2021, a decrease of 97.4 percent from the previous year.

Executive Director of the Hong Kong Tourism Board, Dane Cheng, once described the city’s tourism industry as “frozen,” according to the state-run China News.

Since late January, and the fifth wave of Hong Kong’s COVID-19 outbreak, city officials have been pursuing what they call a “dynamic zero infection” strategy in line with mainland China. Infections are tolerated as long as outbreaks can be contained as quickly as possible. However, this strategy still aims at getting new COVID-19 infections down to zero.

When asked by a reporter about the concept of the dynamic zero-COVID policy, Lam said it is a pandemic prevention and control strategy required by Beijing.

However, Lam said she is not the “initiator” of this policy and couldn’t explain what the word “dynamic” actually means in the context of the policy.