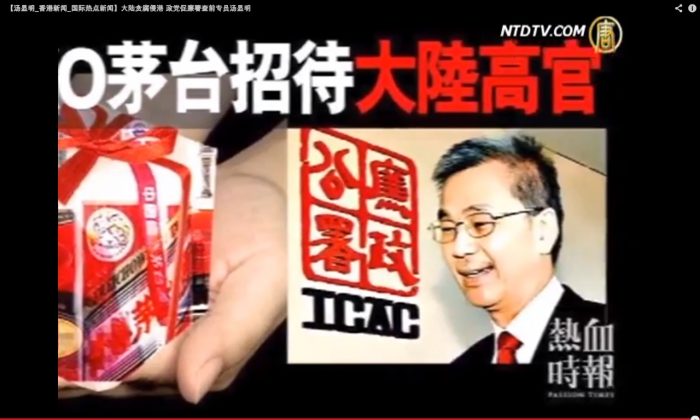 Timothy Tong Hin-ming is shown on an NTD Television report alongside the Chinese characters saying "Entertained high-level mainland Chinese officials with Maotai," an expensive wine in China. (Screenshot via The Epoch Times)
China

The Hong Kong Legislative Council, Legco, has initiated an investigation of the former chief of the Independent Commission Against Corruption (ICAC), amidst charges of lavish spending.

While acting as commissioner, Timothy Tong Hin-ming is thought to have used public funds for excessive travel, hosting extravagant banquets, and buying expensive gifts for officials from Beijing’s liaison office. Earlier this year, Tong was appointed to the Communist Party’s top advisory body, after his five-year stint with the ICAC.

Last week, the Democratic Party’s Lam Cheuk-ting, an investigator during Tong’s watch, filed a complaint about his conduct. Lam questioned the legality of Tong’s girl friend and a personal friend attending official receptions and events, which could constitute misconduct in public office, the South China Morning Post reported.

Current commissioner Simon Peh Yun-lu admitted, “Official meals are only for people involved in the business,” when asked about Tong’s unofficial guests by the Post.

Investigators found that Tong gave 137 gifts worth more than HK$220,000 ($28,337) during his term, mostly to mainland officials. On Friday, the ICAC admitted buying cookies and moon cakes costing more than HK$48,000 ($6,183), that were not included in the earlier total, according to the Post. ICAC’s current head then said it would review the figures, as previous calculations were apparently done in haste.

Legco’s Audit Commission found that a 2011 dinner hosted by Tong for an international anti-bribery event cost HK$1,045 ($134) per head–over twice the permissible limit–and was approved as a publicity expenditure rather than entertainment expenses.

Legco will hold a hearing in May about the two dinners in question, as well as general policies of the ICAC.