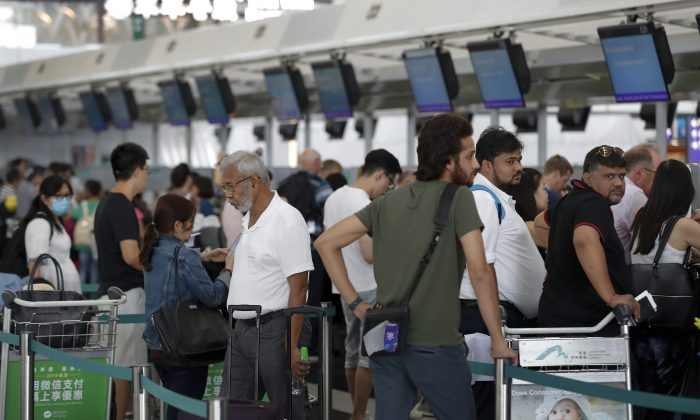 Travelers wait to check in for their flights at the airport in Hong Kong on Aug. 14, 2019. (Vincent Thian/AP Photo)
HK Current Affairs

Hong Kong’s official census shows that 66,000 residents moved out in 2020, mostly the young and middle-aged. One survey showed that 84 percent of high-income groups were considering emigrating overseas.

According to the Census and Statistics Department, the young and middle-aged groups were the primary emigrants. The combined data of males and females in 2020 show the largest decline in proportion was the age group between 15 to 24 years old, a decrease of 0.2 percent; followed by the age group between 25 and 39 years old, and 45 to 49 years old, which both dropped by 0.1 percent. Following their parents’ emigration, children under the age of four also dropped by 0.1 percent.

An Irish investment immigration company in Hong Kong, Bartra Wealth Advisor, conducted an online questionnaire survey. Of the 1,200 respondents, most were in Hong Kong’s high-income groups, such as corporate white-collar workers, businessmen, and other professionals. According to the survey results released on Feb. 9, 32 percent of people are considering emigrating overseas, 52 percent said they would consider it in the future, and only 16 percent said they would not consider it.

The survey also showed that the first choice countries or regions for immigration are the United Kingdom and Taiwan, followed by the United States, Australia, and Canada. The 12 countries available for selection in the questionnaire included Ireland, Germany, Thailand, Malaysia, and Portugal.

On Jan. 31, the British National (Overseas) visa, or BN(O) visa, began to accept applications, providing those with BN(O) status or Hong Kong passport holders a path to immigration.

At the same time, the UK government allowed Hong Kong residents with BN(O) status to reside, study, and work in the UK by exercising the “Leave Outside the [Immigration] Rules” (LOTR), and then apply for a BN(O) visa within the UK. The policy has been extended to July 19.

In the first quarter of 2021, the British government provided LOTR for about 5,500 Hong Kong and BN(O) passport holders to enter the UK.

The UK government estimated that emigrants from Hong Kong would continue to increase. According to its national statistics, before the CCP enforced the National Security Law in July 2019, about 2.9 million people met BN(O) qualification, but only 167,000 held BN(O) passports. As of August 2020, the number of BN(O) passport holders had surged to 612,000.

According to the Australian Department of Home Affairs, since the announcement of the new Hong Kong visa policy on July 9, 2020, as of March 31 of this year, the number of Temporary Skill Shortage visas has increased by 22.3 percent, and Temporary Graduate visas increased by 54 percent.