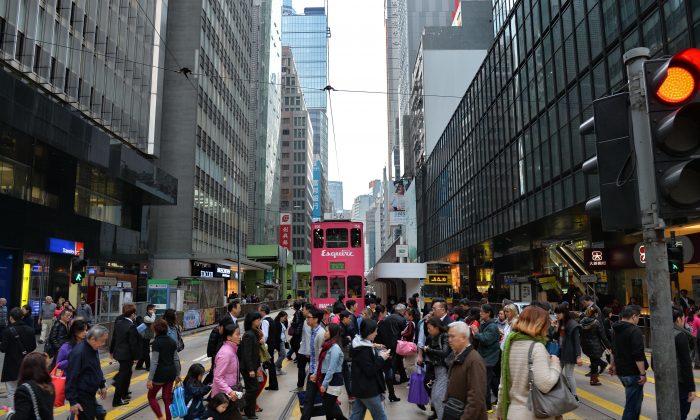 Hong Kong—The governments of China and Hong Kong don’t seem to want to mention the situation of Hong Kong’s sluggish economic growth, and even Hong Kong’s economists and professionals have kept silent on the issue.

When comparing Hong Kong’s economic growth to that of other countries during the 15 years from 1997 to 2012, the results highlight the dilemma Hong Kong has faced for the past decade. After Hong Kong was handed over to China in 1997, there have been major changes to its economic growth and social development.

Citizens believe that while Hong Kong cannot compare to China, South Korea and Singapore, it is still better than Taiwan, Japan, and Southeast Asia which was badly affected by the 1997 Asian financial crisis.

Upon closer investigation, however, the figures show that Hong Kong’s economic growth was the least in East Asia and Southeast Asia from 1997 to 2012—even lower than Japan.

The Last of the Four Asian Tigers

Within the same time frame, South Korea’s increase rate was 101%, Singapore’s was 87.7%, and even Taiwan, which has been looked down upon by neighboring countries’ media, increased by 49.22%, which was 15% more than Hong Kong.

South Korea and Taiwan have a similar situation. South Korea’s real GDP per capita has rapidly increased in the past 15 years, from 41% of that of Hong Kong in 1997 to 61% now.

Lower Than Japan During “Lost Decade”

Japan was criticized by its competitors, the Japanese public, and professionals from all over the world. Japan was burdened with both deteriorating economic growth and, at the same time, evaporating real estate prices.

For the past few years the Japanese society has been dissatisfied with the limited economic growth, and this has been reflected in election results. The Japanese Prime Minister has frequently been replaced, the Liberal Democratic Party has continuous internal struggles, and it has even come to the stage of turning over the Prime Minister’s position to the Democratic Party for the first time since World War II.

Many economists have analyzed the performance of the Japanese economy for the past decade and concluded that Japan is currently experiencing an economic Lost Decade that began in 2000.

Far Below Nearby Asian Countries

In East and Southeast Asia from 1997 to 2012, mainland China had the greatest increase in real GDP per capita, increasing by seven times. Some of the reasons for this economic growth come from the additional value of full monetization as well as the appreciation of Chinese renminbi against US dollars.

For reference, the real GDP per capita of India, also considered a large underdeveloped economy, increased by 2.48 times.

Compared to other Southeast Asian countries, Hong Kong’s increase rate is much lower. From 1997 to 2012, the real GDP per capita rate in Malaysia increased by 127%, Thailand by 167%, Philippines and Indonesia by 230%, and Laos and Vietnam by 313% and 383% respectively.

The economic difference between these countries and Hong Kong is evidently smaller. They are rapidly increasing while Hong Kong is faltering.

As a smaller economy with moderate growth, Hong Kong can never catch up with America and England. Even Ireland, whose economy was similar to Hong Kong’s in 1997, has widened the economic gap.

If we assume that the rapid economic growth of underdeveloped countries is a natural phenomenon, then Hong Kong’s economic dilemma in the past decade is even more obvious compared to developed economies.

Then there’s the situation between Hong Kong and England. Before the handover of Hong Kong’s sovereignty in 1997, Hong Kong’s real GDP per capita had just exceeded its former suzerain England.

Over the next 15 years, however, the difference between Hong Kong and England gradually increased again. In 2012, England’s real GDP per capita was US$39,093 with an increase rate of 64.07%.

Ireland has a similar population size and GDP to Hong Kong. In 1997, Ireland’s real GDP per capita was 80% of Hong Kong’s.

However, in 2012, Ireland’s real GDP per capita reached US$45,932, not only exceeding Hong Kong but also gradually increasing the difference between itself and Hong Kong. At present, Hong Kong’s GDP per capita is not even 80% of Ireland’s.

Purchasing Power Parity Has Gone Down

Within the 15 years from 1997 to 2012, Hong Kong’s annual average growth rate was at 2%. This was not only lower than China and other Southeast Asian countries, but also lower than the other three Asian Tigers. It was lower than Japan, America, England, and even France, which has been widely criticized.

According to the World Bank’s calculation, Hong Kong’s GDP per capita in 2012, in true value according to purchasing power parity, is in fact lower than that in 1997 by about US$1000.

Hong Kong’s growth may be deteriorating more than theirs because it is a more developed and mature economy. Then again, judging by the situation in other developed countries such as America, England, Germany, and Japan, this might not be the real reason.

Other reasons could include changes to the production industry, technological upgrades, or drastic changes to the economic environment. However, none of these reasons can account for the current snail-like speed of Hong Kong’s economic growth.

Therefore, sources believe that Hong Kong must have been left behind due to special circumstances. In 1997, the only circumstance Hong Kong had that other countries did not have was the return of sovereignty to the People’s Republic of China, causing many people to suspect that this is the real reason behind Hong Kong’s deteriorating economy.