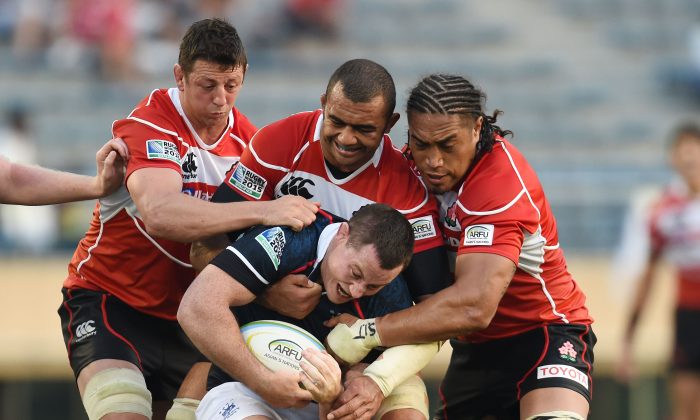 Paul Dwyer of Hong Kong is tackled by (L to R) Luke Thompson, Michael Leitch and Ryukoliniasi Holani of Japan during the Asian 5-Nations between Japan and Hong Kong at National Olympic Stadium on May 25, 2014 in Tokyo, Japan. Japan won the match 49-8 to clinch a place in the IRB Rugby World Cup 2015. (Atsushi Tomura/Getty Images)
International

Hong Kong’s target of achieving direct entry to the IRB Rugby World Cup 2015 was shattered when Japan won the head to head encounter between the two contenders in Tokyo 49-8 on Sunday May 25.

As winners of the Asian Rugby Football Union 5-Nations 2014 competition, Japan get direct entry to Pool-B of the IRB Rugby World Cup (RWC) to be held in England between Sept 18 and Oct 21, 2015. Japan joins South Africa, Samoa, Scotland and USA to complete Pool-B of the competition.

But all is not lost for Hong Kong as it still has a repechage opportunity against Uruguay to be played in Uruguay at a date still to be decided. The winner of this match will then go forward to a two-match play off against the winner of the Europe to Africa Repechage.

Other RWC Qualifiers
Russia pulled off a dramatic last-minute 31-20 victory over Germany to book its Repechage place on Saturday May 24. Germany was leading 20-17 with just a few minutes to the final whistle but Russia put in a late surge producing two converted trys to record its winning score.