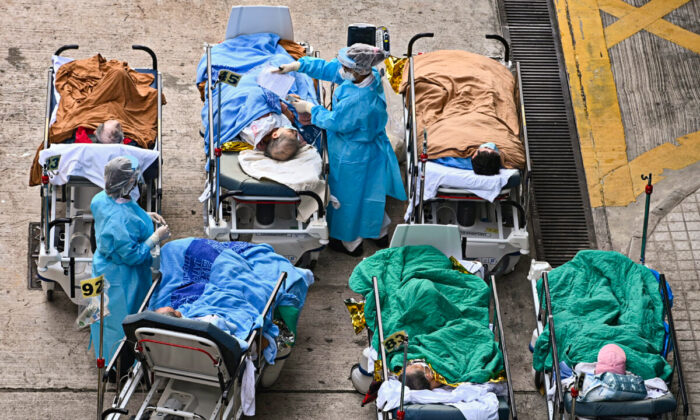 With the city following China’s zero-COVID-19 policy and many concerned residents testing positive for the virus, the city’s medical system and facilities are reaching their limit.

Doctors say that while most patients have mild or no symptoms, thousands of people have been flocking to the city’s hospitals seeking medical assistance after testing positive.

“This is a big problem,” said David Chan, who heads the union Hospital Authority Employees Alliance. “The government messaging has been that COVID is a very dangerous disease … so it is very hard to blame the people.”

The government has also been requiring that residents who test positive and their close contacts to isolate in designated quarantine facilities.

On Feb. 26, Hong Kong authorities reported 17,063 new COVID-19 cases, 66 more deaths, and 40 people in critical condition. Except for 6 imported cases, all others were from local transmission.

On Feb. 25, there were 10,010 new cases reported, setting a new record in Hong Kong since the start of the COVID-19 pandemic. It was the first time that the number of cases in a single day exceeded 10,000, of which 10,006 were from local transmission.

Edwin Tsui, director of the Hong Kong Centre for Health Protection, said at the time the total number of confirmed cases in the city had reached over 126,000.

Sofia Chan, director of the Hong Kong Food and Health Bureau, said that the fifth Omicron-led wave of the COVID-19 pandemic in Hong Kong has been a lot worse than previous waves of infections, with more than 81,000 new confirmed cases so far, accounting for 86 percent of the city’s total cases. She added that experts do not believe infections have reached their peak, with some experts predicting up to 180,000 daily cases in March.

Tsui said that the current spread of COVID-19 in hospitals was most concerning. On Feb. 25, there were confirmed cases reported in 50 hospital rooms, and a total of 470 hospital rooms with COVID-19 patients. In this fifth wave of COVID-19 infections, 1,943 patients in Hong Kong hospitals and more than 600 hospital employees have been infected.

As the COVID-19 outbreak continues to spread, many arrivals at emergency wards have had to wait outside the hospitals due to a lack of manpower.

Chan Kwok Shing, chairman of the Hospital Authority Employees Alliance, also warned of a similar situation at the Caritas Medical Centre’s ER department. There, the two employees on duty during the night shifts are unable to provide enough care for the 80 patients in the ward. He also expressed concern over the health of his colleagues, and said he does not know how long they can last.

Kwok Kin-an, assistant professor at Chinese University of Hong Kong’s School of Public Health and Primary Care, told local media on Feb. 26 that the medical system is overloaded, and urged the government to continue exploring the feasibility of allowing some patients with mild to moderate COVID-19 symptoms to be treated and isolated at home.

If the number of infections continues to rise in the future, as indicated by the research team’s modelling, tens of thousands of people are predicted to become infected every day, which will be more than what the medical system and community isolation facilities can handle, Kwok said.