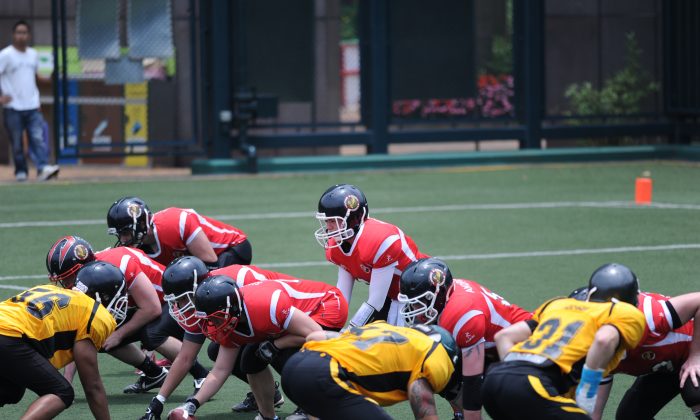 The Hong Kong Cobras (in red) ready for a play in their match against the Philippine Punishers at Man Tung Road Park, Tung Chung, on Saturday May 11. The Punishers won the match 22-9. (Joseph Wai chun Poon)
International

It was another disappointing encounter for the Hong Kong Cobras when they recently played the third match in a four-match series against the Philippine Punishers at the Man Tung Road Park, Tung Chung.

The Cobras—Hong Kong’s leading geared American football team—had practised hard since their 32-12 loss against the Punishers in Hong Kong in August 2012.

Having lost 43-12 in their first-ever match against the Punishers in Philippines in May 2012, the Cobras hoped that they had developed enough in the ensuing year to be closer when they met in Game 3 on Saturday May 11 in Hong Kong.

While the Cobras had indeed improved, the Punishers capitalised on a couple of the Cobras’ mistakes to put them in the driving seat.

The Punishers’ down-field drive at the beginning of the second-half turned a 15-2 lead into a 21-9 victory to make it three wins in a row.

“That’s why we fly all the way here to Hong Kong to play against these boys,” said one of the leaders of the Punishers. “Not only are they [the Cobras] physical, you can also tell they’ve improved a lot since the last time we played against them.

“They were tough to beat,” he exclaimed.

“We were short-handed today, but I’m glad we got the job done here today.”

The match was watched by a good sized crowd and fans roared their appreciation after the match. They were pleased to witness a physical and entertaining game.

“The weather is a little humid, but overall it’s good; perfect weather for sports that’s for sure,” said a first-time spectator of American football.

“A friend of mine bought me here today,” he explained. “I never knew much about football. I didn’t know what to expect at first when I arrived. I originally thought it was just going to be some kind of hitting match, but it’s totally different after learning a few plays from my friend. I’m glad I came.”

With a couple key players missing, the Punishers put an even greater emphasis on playing defence – and it showed.

The Punishers led the game in sacks and intercepting three, scoring two off of the picks and piling up the stats in the overall series. As the Cobras found out, protecting their quarterback and finding running room will be crucial if they want to take Game 4 against the Punishers.

Defensively, the Cobras had a strong outing in this match, limiting the opponents to very few rushing and passing yardages – making key stops and tackles at the right time. The defence also picked up a 2-point “safety” late in the fourth quarter, which allowed them to gain a little momentum in the game, but it was a little too late.

For the Cobras, it was obviously yet another difficult loss to swallow. However, the team can use the lessons from this game as motivation to improve themselves.

The Cobras will return to Philippines for Game 4 in August.

The Cobras will be playing away to Guangzhou in July, but in the meantime, training sessions will be held at Happy Valley – the next session is between 4.00 pm and 6.00 pm on Sunday May 26.

A Flag Football tournament will take place on June 22 at Aberdeen Sports Ground.

American football is the most popular form of football in North America. The National Football League, or NFL, is the highest professional form of the sport in the world, with the world renowned Super Bowl being the championship game at the end of an annual season.

Outside of North America, the sport is commonly called “Gridiron” to help identify it from other football codes. Gridiron is a loose name for both American and Canadian football codes, with roots in Rugby union and Association football. The International Federation of American Football (IFAF) is the international governing body that oversees the sport.

Most notably, gridiron is distinguished by players wearing helmets and shoulder pads, where other forms, or codes, of football do not. Geared football refers to teams that wear such protective equipment.

There are 11 players from each side on the field at any one time in American football. The game is played in four quarters of 15 minutes, each with a 12-minute break at half time. Three time-outs are allowed per team in each half of the match.

Six points are scored for a “touchdown” (running the ball into, or catching the ball in, the end zone of the opposing team). One point is added for kicking through the posts after a touchdown. Three points are awarded for a field goal. Two points are gained when a member of the offensive team is tackled with the ball in the end zone known as a “safety”.

Flag Football is a version of American football where the defensive team removes a flag, or belt, from the ball carrier as opposed to tackling a player to the ground. Otherwise, the rules are similar to the mainstream game’s rules.

The Hong Kong American Football League’s website (hkafl.com) describes Flag Football as: “Fun and social … Whether you have played before, or if you are a newcomer, everyone is welcome to attend. Flag Football is a mixed semi-contact sport and is HKAFL’s most successful platform for Football development in Hong Kong.”