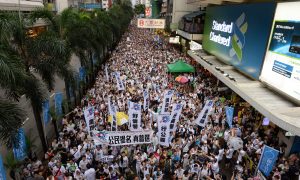 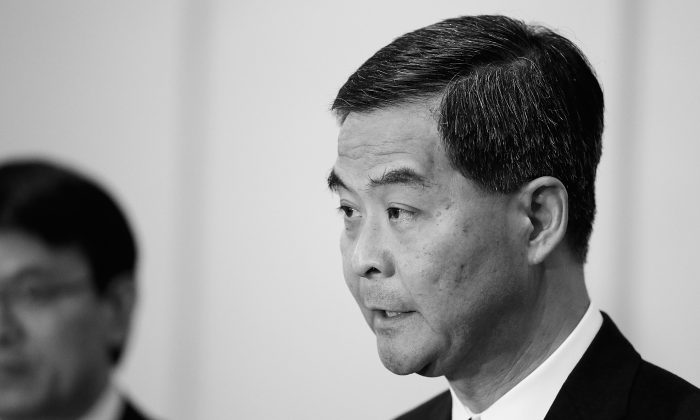 HONG KONG—The people of Hong Kong have begun talking about not whether Beijing will remove their chief executive from power, but when.

Leung Chun-ying has never been popular in the Special Administrative Region. Soon after he came to office in 2012, Leung attempted to introduce the mainland’s school curriculum, which Hong Kong parents view as brainwashing. After massive protests, he was forced to withdraw his proposal.

Groups with ties to Beijing, and supported by Leung, have harassed Falun Gong practitioners and democracy activists. The Hong Kong government has winked at the resulting disturbance of public order and violation of individuals’ rights.

High real estate taxes have angered Hong Kong’s businessmen and property developers. Leung’s recent proposal to develop the New Northeast Territories has infuriated residents there and reinforced the impression that he is unresponsive, out of touch, and captured by special interests.

But Leung’s endorsement of the June 10 white paper issued by the Office of Foreign Propaganda in Beijing has brought Hong Konger’s anger at Leung to fever pitch.

That white paper called into question the principle of one country, two systems, which has guaranteed Hong Kong a political system different from that on the mainland. Since the handover to the People’s Republic of China in 1997, Hong Kong has enjoyed its inheritance of the rule of law, an independent judiciary, and the rights of speech, press, and assembly.

A sign of the people’s anger was the massive turn out for the annual July 1 march for democracy.

Amid recurring downpours, a crowd estimated conservatively by the march’s organizers at 510,000, and at 1 million by the news website Boxun, marched for several hours through downtown Hong Kong, carrying signs calling for universal suffrage and the end of the Chinese Communist Party’s rule.

The July 1 march followed immediately after an informal, online referendum in which 800,000 Hong Kongers called for universal suffrage, and a massive turn out on June 4 memorializing the victims of the Tiananmen Square massacre.

On the agenda for later this summer: Occupy Central With Love and Peace, a planned campaign of civil disobedience in the city’s business district calling for universal suffrage.

An approaching deadline for Beijing to provide blueprints for political reform in Hong Kong would have in any case driven the mobilization of Hong Kongers demanding democracy.

At issue is whether Beijing will allow universal suffrage in Hong Kong’s elections, including the chief executive, or will it continue some version of the current system of indirect elections. That system allows Beijing to keep firm control of Hong Kong’s government, while disenfranchising most of Hong Kong’s citizens.

But the popular ferment aroused by demands for democracy has been made more intense by the Hong Kong people’s loathing of Leung.

Liao Shiming, a senior commentator on politics and economy in China and Hong Kong, recently commented that Leung’s administration was responsible for the anger displayed at the July 1 march.

“All the extreme democratic protests are results of people not being able to communicate with the government in other normal ways,” Liao said.

There are signs that Beijing now wants to use Leung as a scapegoat, diverting the Hong Kong people with the satisfying spectacle of cashiering, or even arresting their chief executive.

On July 7 the news website Post 852 quoted an anonymous source in the Chinese regime saying that Beijing could throw Leung out to take the blame for the discontent in Hong Kong, or might arrest him to defuse the people’s anger.

According to Post 852, the rich people in Hong Kong have been having a heated discussion about how Xi Jinping has begun to put Leung’s performance under a microscope.

Post 852 quoted its source in the regime regarding plans for replacing Leung. The Legislative Council (LegCo) President Tsang Yok-Sing would become chief executive, while John Tsang Chun-Wah would become the chief secretary for administration and Antony Leung Kam-Chung the financial secretary.

As if on cue, on July 8 Tsang Yok-Sing, who has always been firmly allied with Beijing, emerged as a public critic of Leung.

At that day’s LegCo meeting, Leung blamed a bloc of 20 democratic legislators for delaying the council’s business by pulling out banners and holding protests and claimed, “There wasn’t any problem between the administrative and legislative offices.”

Tsang replied that by blaming a few legislators, the government oversimplified the problem of its bills being blocked.

“Over 20 legislators stood up and left the session when chief officials came to defend the proposed bill. I don’t believe that there still exists a healthy relation between the administration and the legislature,” said Tsang.

Tsang said, “The government should know the timetable of the Legislative Council and which bills are controversial and which ones are not. How to put the bills in the right order has always been the administration’s decision.”

More Criticism From the Left

The Oriental Daily News is known in Hong Kong to be a reliable supporter of both the mainland regime and of Leung Chun-ying.

On July 7, the paper came out strongly against Leung. Its headline said Leung has “caused political chaos and misery for the people of Hong Kong,” according to a survey.

On July 8 the Oriental Daily News returned to the attack with another front-page article, again using a survey. This one, done by the Chinese University of Hong Kong, said the young people in Hong Kong were angry at Leung for ignoring public opinion.

On July 8 the paper also published a merciless editorial. It began by noting that there has recently been one political wave after another in Hong Kong. It described Leung’s reign as that of “a lame duck” that has suffered a “severe stroke” and was “paralyzed.” The editorial claimed that Leung would be “at best a zombie,” even if he struggled to finish out his term.

As recently as March 28, the Oriental Daily News reported in a front-page story that it had received “authoritative information” saying that Beijing supported Leung’s re-election and expected him to stabilize the political situation in Hong Kong.

Leung’s current trouble is a reflection of the factional politics that is roiling the CCP. Leung is known to be allied with the faction of former Party head Jiang Zemin, and the white paper Leung supported was issued by another Jiang backer, Politburo Standing Committee member Liu Yunshan.

According to sources inside the CCP, the Jiang faction hoped to use the white paper to create unrest in Hong Kong, and by doing so make trouble for Party head Xi Jinping. The peaceful but massive response by the Hong Kong people defeated that plan and put Leung on the hot seat.