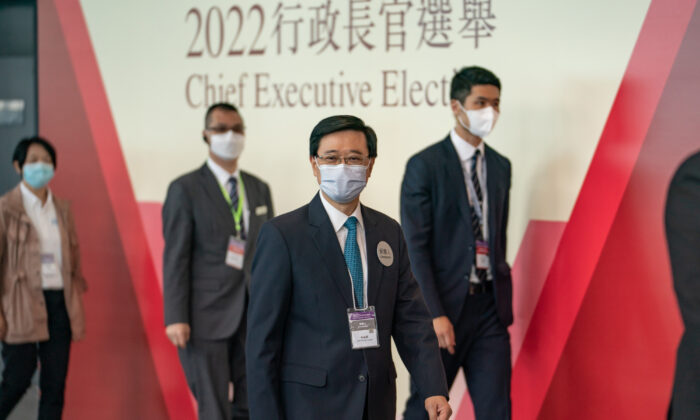 The outcome of the May 8 Hong Kong chief executive election came as no surprise. Lee Ka-chiu, the only candidate chosen by the Chinese Communist Party (CCP), was declared the winner after a staged performance under the “One Country, Two Systems” constitution.

Of the 1,461 eligible voters, 1,428 cast their ballots in the May 7 election. In the end, Lee received 1,416 “YES” votes and eight “NO” votes, the highest percentage of votes ever recorded by a Hong Kong chief executive, surpassing Donald Tsang’s 82.26 percent in 2007. However, Lee is also the chief executive with the lowest public approval rating in Hong Kong’s history.

Since the CCP takeover of Hong Kong, the election committee in charge of selecting the chief executive has increased from 800 to 1,500, but it’s still composed of only elites, people inspired or appointed by the government.

Since the CCP took over Hong Kong in 1997, there have been voices of support for universal suffrage among the pro-democracy groups and even the pro-CCP parties, but Hong Kong has moved further and further away from the promised goal of all adults having the right to vote in its Basic Law.

However, during the “political reform consultation” that began in 2013, the government ruled out “citizen nomination,” calling it a violation of the Basic Law. On June 10, 2014, during the consultation period, the information office of the CCP’s State Council published a white paper entitled “The Implementation of ‘One Country, Two Systems’ in the Hong Kong Special Administrative Region,” stating that the Chief Executive candidate “must be a patriot and a lover of Hong Kong.”

On Aug. 31, 2014, the rubber-stamp legislature decided universal suffrage would be used to select the Chief Executive of the Hong Kong Special Administrative Region and how the Legislative Council would be formed in 2016 (Decision 831). It decided not to apply civil and political party nominations. It also stipulated the size and composition of the nominating committee, that a Chief Executive candidate must receive the support of more than half of the nominating committee members to become a candidate, and that the number of candidates is limited to two to three.

The “831 Decision” directly triggered the large-scale “Umbrella Movement” and “Occupy Central” protests in Hong Kong. For 79 days, beginning on Sept. 26, 2014, secondary and university student organizations and Hong Kong citizens launched a series of civil disobedience campaigns demanding true universal suffrage. The protesters spontaneously occupied several main roads and staged sit-ins and marches. Their main demands were to withdraw the “831 Decision,” to obtain the right of nomination for the chief executive election, and to abolish the functional constituencies of the Legislative Council.

After several false political reforms, the promise of universal suffrage in the Basic Law was never achieved. Furthermore, the Hong Kong government disqualified a number of democratic members of the Legislative Council in 2016, and attempted to amend the “Fugitive Offenders Ordinance” (known as the extradition bill) in Parliament in 2019.

These factors eventually led to the Anti-Extradition Law Amendment Bill (ELAB) Movement in 2019. During the movement, Lee was appointed as Secretary of Security. Hong Kong police suppressed demonstrators with water cannons, rubber bullets, and even live ammunition. After the movement, the CCP bypassed Hong Kong’s legislative process and enacted the Hong Kong National Security Law, accusing foreign forces of intervening in the movement.

After the enactment of the National Security Law, in 2021, the CCP moved ahead to “improve” the electoral system based on the principle of “patriots ruling Hong Kong.” It blatantly bypassed the provisions of the Basic Law and directly allowed the rubber-stamp legislature to decide on the future methods of selecting Hong Kong’s Chief Executive and the Legislative Council.

By establishing a Candidate Eligibility Committee and changing the composition of the Election Committee, the CCP further narrowed the room for elections that already lacked democratic elements to complement its “full governing power” over Hong Kong.

Chung Kim-wah, an outspoken scholar and deputy chief executive of Hong Kong’s Public Opinion Research Institute (PORI), said Lee commented after the election that getting 1,416 votes encouraged him and gave him a strong sense of confidence.

“But if such an election can increase confidence, you’re either a fool, or fooling yourself, [because] the votes were not earned by him but given by Beijing,” Chung told The Epoch Times.

In March, a month before he resigned as Chief Secretary, Lee had a net approval rating of minus 14 percentage points, according to a poll by PORI.

Looking at Lee’s performance in the past five years and without approval from the public, it will be difficult for him to effectively lead or call on the people, Chung said. In addition, Lee has no experience in finance, foreign trade, welfare, business, housing, medical care, education, or labor. If he continues to suppress civil society, the situation in Hong Kong will continue to be difficult, and there will be a further loss of talent and capital.

“Lee Ka-chiu doesn’t bring Hong Kong any hope, not even the fantasy of it!” Chung added.

According to Choy, there has been a change in staffing strategy. Beijing is now more focused on political loyalty, political discipline, and enforcement.

The old “AO-rule” model of civil servants and Administrative Officers, which emphasized procedures, procedural rationality, procedural justice, and discussion, has slowly fallen into disfavor with Beijing, Choy said. More and more military officers, such as people with a background in the Police Force or the Immigration Department, have taken leading positions in the government, including the Director of the Chief Executive’s Office, the Secretary for Constitutional and Mainland Affairs, the Chief Secretary for Administration, and now the Chief Executive.

Universal Suffrage Is Null and Void

Benson Wong Wai-Kwok, an independent scholar and former assistant professor in the Department of Politics and International Relations at Baptist University, told The Epoch Times: “Article 45 of the Basic Law, which refers to the ultimate election by universal suffrage, is now null and void.”

Wong said that Lee’s advantage in governing relies on the abuse of power by the National Security Department and police force, the creation of terror to maintain stability, as well as showing allegiance (to the CCP) and political correctness on major policies.

However, the biggest challenges Lee faces, according to Wong, are an economic plunge, an immigration wave, foreign investment withdrawal, the COVID-19 epidemic, and Lee’s low governance skills. In addition, if the central government is not satisfied with him, or there is an extreme change in domestic politics and a major shift in policy towards Hong Kong, a mid-term replacement of Lee is possible.

Wong also said that it wouldn’t be surprising if there’s a “third anti-tyranny resistance” uprising in Hong Kong during Lee’s tenure. Although many of the major pro-democracy activists and the Valiantist faction have been dispersed or imprisoned, political repression and institutional corruption have intensified, Wong said. Coupled with the imminent economic crisis, the feelings of resistance have spread beyond the young, the pan-democrats, and the local faction in the past and have now crossed sectors, social strata, and age groups.