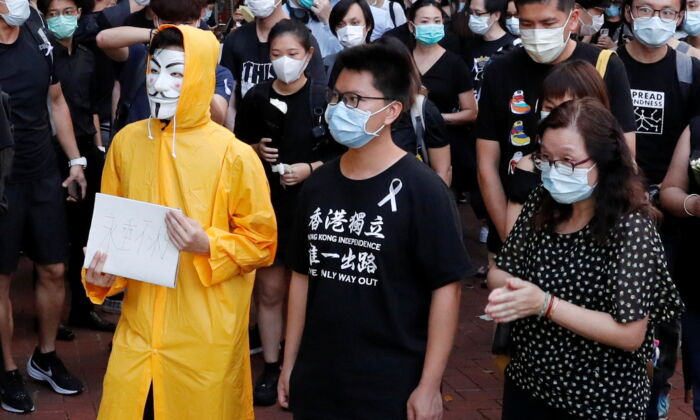 A Hong Kong court has handed down a nearly six-year prison sentence to a pro-democracy protester, after ruling that he had violated a Beijing-imposed national security law through certain nonviolent acts, including the chanting of protest slogans.

Former delivery man Ma Chun-man, 31, dubbed “Captain America 2.0” for wielding the superhero’s shield during protests, was sentenced on Nov. 11 to five years and nine months in prison for incitement to secession. His conviction was the second under the security law, which was imposed by the Chinese regime in June 2020.

Ma is the first to be sentenced under the law solely for his speech. A district court judge found Ma guilty in October of inciting secession due to the slogans he chanted, such as the popular pro-democracy chant, “Liberate Hong Kong, revolution of our times”; the placards he held; and the statements he made to media.

Ma had pleaded not guilty and didn’t testify.

During the trial, his defense attorneys argued that Ma was merely exercising his right to free speech, saying that he “merely chanted slogans loudly, appearing alone.” Nor did he harm others or engage in “open defiance,” they told the court on Nov. 11.

Before the sentence was delivered, Ma’s attorneys read part of a letter Ma wrote to the judge.

“I do not feel any regret,” Ma wrote in the letter, which he signed with his nickname. “On my road to democracy and freedom, I can’t afford to be a coward.”

The judge said Ma “was incited by some politician and he eventually became an instigator himself,” without naming the politician.

“In this context, it’s hard to guarantee there won’t be other Ma Chun-mans,” the judge said.

“It is outrageous that Ma Chun-man has been sentenced to more than five years in prison simply for chanting slogans and sharing his political views online,” Amnesty International’s Deputy Secretary General Kyle Ward said in a statement. “The Hong Kong government must stop criminalizing mere acts of expression without any demonstrated connection to the use of force or imminent violence.”

The national security law criminalizes any speech or act deemed by Beijing to constitute secession, subversion, terrorism, or collusion with foreign forces, with each offense carrying a maximum penalty of life in prison. It has been widely criticized by Western governments and human rights bodies as a tool used to purge pro-democracy proponents and suppress dissent.

Since the law has taken effect, more than 100 people—mostly pro-democracy politicians, activists, media figures, and students—have been charged under the measure or similar offenses.

Tong Ying-kit, the first person to be convicted under the national security law, was sentenced in July to nine years in prison. Tong was accused of incitement to secession and engagement in terrorist acts after he drove a motorcycle carrying a banner bearing the slogan, “Liberate Hong Kong, revolution of our times” into a group of policemen in 2020.

Hong Kong courts are set to hand down sentences to three other national security cases in 2021. In August, pro-democracy activist Andy Li and paralegal Chan Tsz-wah became the first people to plead guilty to charges under the law. On Nov. 3, 20-year-old student activist Tony Chung, who was preparing to apply for asylum at the U.S. Consulate before he was arrested, pleaded guilty to secession. They face up to seven years in prison.