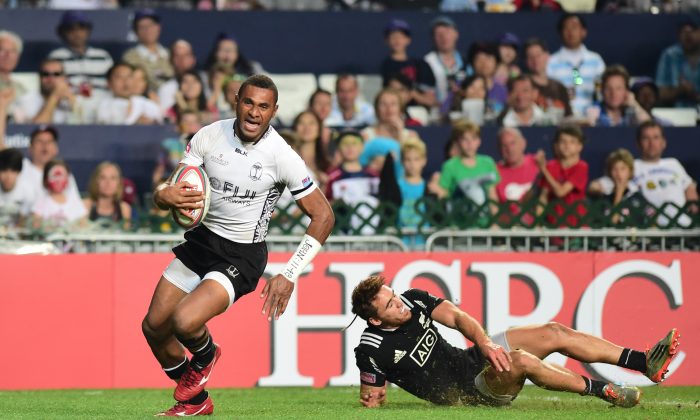 Jasa Veremalau of Fiji runs for the try line in the second half of the Hong Kong Sevens Cup Final on Sunday March 29, 2015 to make the score 26-12. Although New Zealand hit back with a further try and conversion Fiji won the Cup Final 33-19. (Bill Cox/Epoch Times)
HK Rugby Union

Hong Kong celebrated 40 years of Sevens last weekend, March 27-29. The Hong Kong Rugby Football Union can rightly, but quietly, claim the Hong Kong Sevens re-launched the global popularity of the shortened version of the sport. It helped change Sevens from a post-season runabout to a competition requiring the highest levels of fitness in the sport. It laid the platform for Sevens to feature at the Rio Olympics next year: perhaps the greatest legacy of this event.

Hong Kong is often more carnival than competition. The crowd is raucous, good natured and many are kitted out in fancy costume; from the stalwarts of the South Stand to the suits in the Corporate Boxes. It’s party atmosphere off-pitch, but serious competition on-pitch. This is a rugby Festival and, to quote Ben Ryan, it’s The Wimbledon of Sevens, but for champagne read beer, and for strawberries read burgers!

Between, the crowd renditions of old favourites such as Sweet Caroline, or tub-thumping advertising designed to get people on their feet, as much as promote a product or enhance a brand, there is the serious business of rugby. This is professional sport. There are points to win. Trophies to claim. The Olympics to qualify for. Whilst some things remain the same in Hong Kong; referees with blind sticks, the sea of mini rugby matches and good humoured announcements, including a marriage proposal this year (she said Yes), the teams themselves are increasingly focused on the games, the points and their next opponent. They will only relax once there is nothing more to play for.

The HKRFU decorated the Stadium with reminders of past events, liberally advertised the Four Zero signage and introduced to the crowd a Magnificent Seven of… you guessed… seven players who, they feel, have had the greatest impact at Hong Kong over the years: Johnny Zhang (China), Christian Cullen (NZ), Eric Rush (NZ), David Campese (Australia), Ben Gollings (England), Jonah Lomu (NZ) and the Sevens maestro himself, Waisale Serevi (Fiji). Along with Village People and The Pub Landlord, this commemoration sadly fell flat. It deserved more gravitas for the role they have played in elevating this sport.

Hong Kong was round six (of nine) for the 2014-15 Sevens circuit, with round seven in Tokyo, this weekend, and Glasgow and London in May.

Competition began on Friday. This marked the end of a plethora of Rugby festivities in Hong Kong, and the start of the Sevens proper. All teams in the Main competition played one match on Friday. All games went to form. The top seeds in each group played the bottom. The Hong Kong Sevens was also host to a Qualifying competition, with 12 teams vying for one place on the Sevens circuit next season. Winner takes all. On Friday the qualifiers played two matches each, with the only surprise result being Brazil deservedly edging Hong Kong 17-12, scoring two late tries. A defeat that would prove ominous for Hong Kong.

Saturday began in boisterous and happy style. The South Stand was full by 8:30am, probably a new record! The crowd included pirates, pharaohs, pilots and police; most in fancy dress, but some in uniform and undercover. At the South Stand it was difficult to see anyone not in costume. On pitch the day began with the final round of matches in the Qualifying competition, which signalled the exit of Tonga, Tunisia, Mexico and Guyana. Those left, competed in the quarter final matches, where Papua New Guinea beat Uruguay (38-10); Russia eased by Hong Kong (24-0); Zimbabwe narrowly beat Brazil (21-14) and Spain trounced Korea (47-7). For Hong Kong, as the host team, it was disappointing to exit so early. They played well to beat Uruguay in the group stage, but were outclassed by Russia in the quarter final.

Throughout Saturday, the Main competition went to form, except for Portugal gaining a thrilling draw with New Zealand 24-24, with only a missed conversion at the end denying them victory. And a 21-21 draw between the USA and England, in a tight, entertaining match. That gave the USA top position in the Group, and left England to face Fiji in the quarters.
Sunday, was knock out rugby. All matches meant either points or silverware for the Core teams; or home in the Qualifying tournament.

By now there were only four teams left in the Qualifying tournament. By an odd quirk of elimination, the semifinals matched the same teams from their respective groups. Russia played Papua New Guinea again, and Spain played Zimbabwe. This time, in both matches, the result was reversed; setting up a Russia versus Zimbabwe final instead of Papua New Guinea versus Spain. The final was exceedingly close. Zimbabwe thought they had the match won, when they took a 19-17 lead with only two seconds left, but Russia won the restart and scored a try to secure a 22-19 victory. Russia joins the Sevens circuit next season. Zimbabwe has the painful consolation of thoughts of what might have been? To see the pain of losing on the shoulders of the qualifying teams exiting the tournament was a salutary lesson in the fine margin between success and failure in rugby. For Russia, there is the promise of better things to come; for others it’s more hard work.

In the Main competition, the teams in the top half of the Group were competing for the Cup or Plate; and the lower half, for the Bowl or Shield.

The Shield was retained by Kenya, comfortably beating Japan in the final 26-7: and the Bowl retained by Scotland with 26-5 victory over France. Vern Cotter take note: this is a Scottish team that knows how to win!

For teams in the Cup and Plate the points at stake were vital. The quarters were tense, close affairs. None more so than Fiji versus England. Fiji scraped home 14-12, in an ill-tempered match, with two yellow cards, a penalty try and statements of manhood that went on after the final whistle. In the other games, South Africa edged Australia 7-5; Samoa ended the USA’s resurgence 26-15 and New Zealand did enough to beat Argentina 31-2.

The Plate final was between Australia and the USA. Australia reached the final by beating England 12-7. It was an important win, not only did it give the Australians the chance for silverware, but they gained more points than England in the race to Rio. The USA beat Argentina 28-14 in their semifinal and rediscovered their form after their sluggish performance in the quarters. It was close end to end match: the USA took the lead, Australia fought back, and the USA so nearly stole it at the end. The points won by Australia edge them further ahead of England in the race to Rio; and the statement of intent by the USA serves as warning to other teams, that this is talent developing into a strong sevens force.

The Final. The last hurrah of three days of Sevens rugby with over 70 matches at the Stadium. It was a battle royal between Fiji and New Zealand. They both reached the final with narrow victories: Fiji beat South Africa 21-15, and New Zealand just beat Samao 15-14, with a late penalty goal. No match amongst the top teams had a margin of more than two scores, which shows how close and competitive these games are. After the misfiring of the National Anthem, the match began. Fiji looked imperious from the outset. This was a match they wanted to win, and win in style. They raced out to a 21-0 lead, slicing through the New Zealand defence and running in tries from within their half, with a passing and handling masterclass. It was a joy to watch. New Zealand edged their way back into the game, with two scores either side of half time and at 21-12, the next try was going to be decisive. And it was Fiji, who stamped their authority on the game, moving the score out to 28-12, and put one hand on the Cup. There was time for two more scores, one for New Zealand, and at the final whistle a showboat try for Fiji to seal 33-19 victory. Their defence was relentless, but their attack and running with the ball in hand, sometimes just one hand, is superior to any other team… and crucially their intuition and support of each other running off the ball or assisting in contact, separates this team from all others at this moment. Victory for Fiji. A just reward for their weekend efforts.

Fireworks went off. Champagne corks popped. Tina Turner was belted out of the sound system. As the crowd celebrated Fiji’s victory, and people said their farewells and adieu till next year… the players and coaches on both teams, were probably turning their thoughts to next week’s matches in Tokyo. After all, this is a professional game, with much at stake.
In the important matter of points South Africa is still at the top of the table, with 110. Fiji are now second with 108, and New Zealand drop to third with 107. Australia keep a firm grip on the important fourth place, with 84; and England now find themselves six points behind with 78. All to play for in Japan.

It was another successful Sevens for Hong Kong. Less so for the Hong Kong team, more so for the HKRFU, who are to be commended for a tournament well run. But it’s the crowd, wherever they are sitting, however they are dressed, that create the unique and festive atmosphere for this event, which is part celebration part competition, and totally about the camaraderie of rugby on and off the pitch.