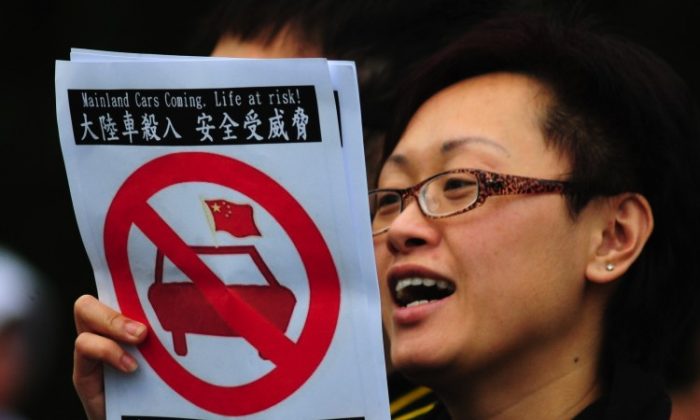 A woman holds a placard against allowing mainland Chinese drivers into Hong Kong at a demonstration in a park in Hong Kong on Feb 12. (Antony Dickson/AFP/Getty Images)
China

Tensions between locals in Hong Kong and the mainland Chinese have once again gone sour, with protests erupting over the government’s decision to allow Chinese cars onto the island.

Last week, around 300 protesters marched in the central district demanding that the government backtrack on a scheme that will see mainland cars drive in the so-called Special Administrative Region of Hong Kong.

Protesters waved banners with slogans written in Chinese traditional characters “[We] oppose mainland cars roaming in Hong Kong freely!” and “No, no, no, Mainland Chinese cars.”

Central to the debate is the fact that Hong Kong traditionally drives on the left side of the road—likely a result of the island’s British colonial past—while Chinese drive on the right side. Critics of the proposed changes believe allowing cars with left-side steering wheels will cause more accidents in an already congested city.

The Cross Border Driving Scheme will be introduced in stages, with the first stage set to commence next month.

The initial provision will allow Hong Kong cars to be driven into China. The quota for that operation will be set at 50 cars per day. However, sources say that it could be increased to 500.

The commencement of the second stage, which will open Hong Kong roads to mainland cars, has yet to be announced, but residents are furious the scheme is even being considered.

Another main complaint in Hong Kong is that the public was not consulted by the government on the issue.

Secretary for Transport and Housing Eva Cheng attempted to dampen the protests, telling reporters that it was “just a trial scheme.” In other words, the changes are not official Hong Kong policy yet.

“We will review [the plan’s] viability and proceed gradually with caution, taking into account various factors, including safety and the capacity of road networks,” she said.

Relations between Beijing and Hong Kong, which is suppose to enjoy greater freedoms under the one-country-two-systems rule, have been strained recently, especially since an outspoken Chinese academic Kong Qingdong called Hong Kongers “dogs” of the British and even nastier insults.

Even though Hong Kongers share a Chinese heritage, they often do not consider themselves Chinese and remain proud of their greater degree of freedom compared to communist China.

Heated discussions have erupted beyond the borders of the “fragrant harbor” to Hong Kong expats around the world via chat forums and YouTube postings.

Anti-mainland immigration sentiment in Hong Kong has also fomented recently over the trend of pregnant mainland women coming over to give birth in already overcrowded Hong Kong hospitals. The incentive is that any baby born in Hong Kong is granted automatic permanent residency. Mainland mothers also do it if the baby is their second, in the hopes of skirting the Chinese Communist Party’s one-child policy.

Ahead of the upcoming elections in March, the Civic Party, the third largest in the government, says it will continue to collect signatures opposing the Cross Border Driving Scheme. The petition being circulated also demands a stop to allowing Hong Kong births.