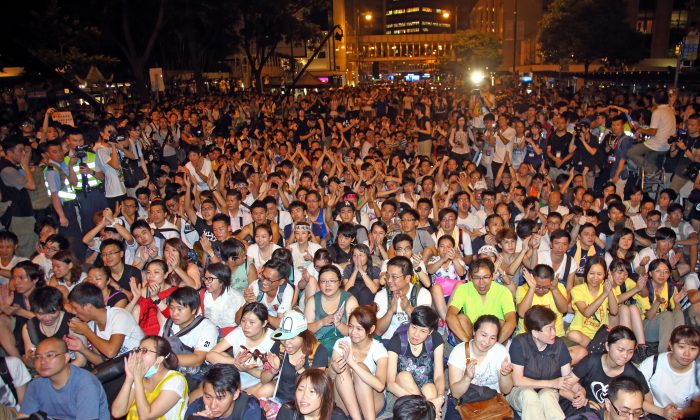 Hong Kongers Struggling in the Dark

Early in the morning on July 2, the Hong Kong Federation of Students began an overnight sit-in at Charter Road in Central, aiming for civil disobedience and launching the first wave of a non-violent civil struggle for democracy.

The movement has received positive feedback from social and civil groups. It is indicated that all Hong Kong citizens will be able to participate in the second movement, using civil disobedience to reverse the fate of Hong Kong.

Many citizens have accused Chow and others of fabricating lies and portraying civil disobedience and the peaceful Occupy Central movement as violent actions. Peaceful protests by the public have also been depicted as heinous crimes.

Last week several members of the Chamber of Commerce complained that the Occupy Central movement was affecting Hong Kong’s economy. However, they ignored the necessary conditions for the functioning of a business, such as an independent judiciary, a high degree of autonomy, and the enterprise’s political stance not being swayed by politics.

Like the students, we have persisted over the years to ensure true suffrage for Hong Kong people so they can make the right choices. Any decisions that have to go through the central Chinese government are false elections.

Without true suffrage, the Hong Kong government can use public resources to suppress the public’s civil disobedience movements. The methods they use to deceive the public are embarrassing to the Hong Kong people.

When Chow’s campaign is reported in the media, most people do not know the real purpose of the signatures. Some believe it is the occupation of East Tsim Sha Tsui, some think it’s for anti-violence or for opposing violence in the Legislative Council, and others believe it is to fight for true suffrage.

It is quite the contrary. The peaceful Occupy Central movement is to fight for true suffrage.

The 500 protesters who were arrested on July 2 had actively demonstrated civil disobedience, impressing the public. The movement also revealed the determination and aspirations of Hong Kong people.

We want control over Hong Kong’s fate. We are unwilling to be treated as pawns of the incompetent Hong Kong government, nor will we be vanquished by the Beijing government.

Martin Luther King, Jr. once said: “We shall match your capacity to inflict suffering by our capacity to endure suffering. We shall meet your physical force with soul force. Do to us what you will, and we shall continue to love you. We cannot in all good conscience obey your unjust laws because noncooperation with evil is as much a moral obligation as is cooperation with good.”

In the words of famous Chinese modern poet Gu Cheng, “Even with these dark eyes, a gift of the dark night, I will seek the shining light.”

The road ahead may be difficult, but as long as we are united, it will eventually bring light and victory.

Translation by Veronica Wong. Written in English by Sally Appert.