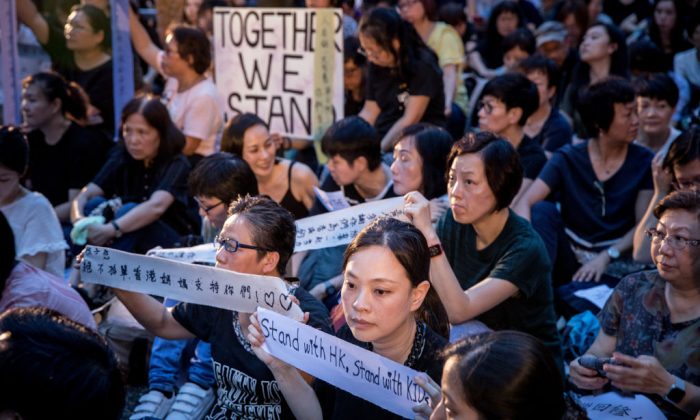 People hold up banners and posters during a "mums protest" against alleged police brutality and the proposed extradition treaty in Hong Kong on June 5, 2019. (Chris McGrath/Getty Images)
HK Current Affairs

In Hong Kong, another march is set for the afternoon of July 7 as protesters continue on with their demand for the city government to scrap a controversial extradition bill. The march, however, will be different from previous ones; rather than being directed at the government, this one will be appealing the protesters’ cause to mainland Chinese tourists.

The final destination of the scheduled march route is West Kowloon Station—the terminus of the Guangzhou–Shenzhen–Hong Kong Express Rail Link. The station is also the cross-border gateway for mainland Chinese tourists traveling into Hong Kong.

Ventus Lau Wing-hong, one of the organizers of the march, explained on June 6 that the purpose of the march is to tell visiting mainland Chinese tourists what Hongkongers are protesting about, since Beijing has provided a censored and biased coverage of the protests.

According to Lau, Beijing has intentionally reported on clashes between Hong Kong police and protesters without providing enough context surrounding the events leading up to the clashes.

Lau added that march would be a “civilized” one, where participants will be “peaceful, polite, and friendly” to distribute flyers, among other things, to mainland Chinese tourists. He estimated that there will be 2,000 people joining the march.

Organizers of the march have set a gathering time of 3:30 to 4:00 p.m. local time at Salisbury Garden, which is located in Tsim Sha Tsui—a district in Kowloon. The march will begin at 4:00 p.m., with the scheduled route going from Kowloon Park Drive to Canton Road and Austin Road, before arriving at the West Kowloon Station. The march is expected to end at 5:30 p.m. local time.

The Hong Kong government first proposed the controversial extradition bill in February. If passed, the legislation would allow the chief executive—the city’s top official—to sign off on extradition requests, including from mainland China, without approval from the city’s legislature.

A major clash between Hong Kong police and protesters took place on June 12, as peaceful protests descended into chaos around 3 p.m. local time after some protesters attempted to break the police line outside the legislative council (LegCo) building. Local police used pepper spray, tear gas, rubber bullets, and bean bags in an attempt to remove protestors from the streets.

In the morning hours on July 2, police also fired multiple rounds of tear gas to disperse crowds still gathered outside of LegCo after some protesters had broken into the legislative building by smashing glass doors with a metal trolley and poles. They then briefly occupied the council chambers.

Organizers of the march have raised over HK$41,000 (about $5,200) through a crowdfunding campaign via the GoGetFunding page. The money will go towards borrowing audio equipment as well as printed materials to be distributed during the march.

Hong Kong metro authorities have implemented crowd management measures at West Kowloon Station, where passengers can only enter and exit through a number of designated locations.

Lau was also one of the organizers who arranged for marches to different foreign consulates on June 26 to urge members of the G-20 summit to put the Hong Kong protests on their agenda during talks in Japan, according to Hong Kong Free Press.

G-20 was held in Osaka on June 28 and 29. U.S. President Donald Trump and Japanese Prime Minister Shinzo Abe raised the Hong Kong protests during their bilateral meetings with Chinese leader Xi Jinping on the sidelines of the summit.

Epoch Media Group will be broadcasting the march live from The Epoch Times and NTD Television’s Youtube and Facebook pages.