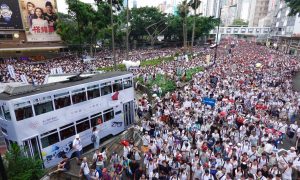 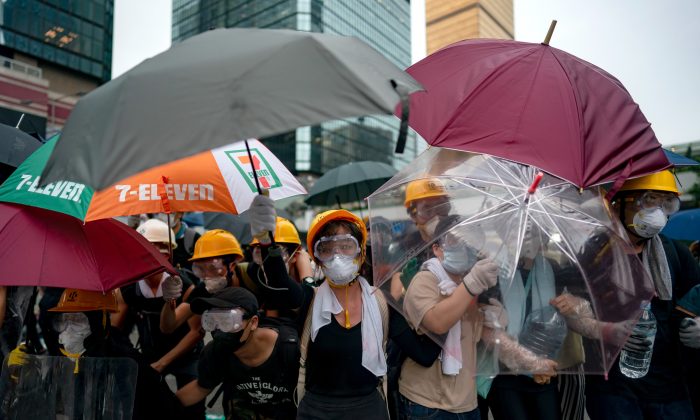 Protesters hold umbrellas during a protest on June 12, 2019 in Hong Kong China. Large crowds of protesters gathered in central Hong Kong as the city braced for another mass rally in a show of strength against the government over a divisive plan to allow extraditions to China. (Anthony Kwan/Getty Images)
Chinese Regime

Organizers of a mass protest that drew more than 1 million people to the streets of Hong Kong to oppose a controversial extradition bill are planning another march this weekend.

Following the million-strong turnout on June 9, Hong Kong’s top official, Carrie Lam, remained undeterred in pushing the bill forward. So, thousands of protesters showed up outside the city’s government complex before a scheduled legislative debate on the bill was to begin on June 12.

“The demonstrators’ courage in the face of threats, police batons, and tear gas is an example for the world to follow. We support these demonstrators as they fight for freedom and call on Hong Kong and Chinese authorities to respect their right to peacefully protest,” wrote a group of U.S. senators in a joint statement on June 12.

The organizers of last week’s march, the Civil Human Rights Front, announced in a Facebook post on June 13 that they have applied with police for a march on June 16, to protest the “police force’s violent suppression of citizens.”

The group said it had three demands: a condemnation of police violently suppressing the protesters; the extradition bill to be withdrawn; and for Lam to step down. It added that its police application includes a rally for June 17, when people are encouraged to boycott classes, leave work, and close down businesses—dubbed the “three suspensions.”

Meanwhile, the pro-Beijing head of the legislature has postponed debate on the extradition proposal until further notice.

The bill, which would allow any country, including mainland China, to seek extradition of criminal suspects, has drawn broad opposition. Hong Kong citizens and Western government officials have expressed concerns that given China’s disregard for rule of law, the changes could allow the regime to charge its critics with impunity.