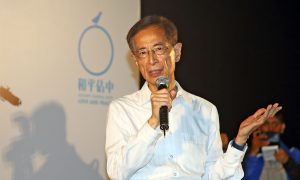 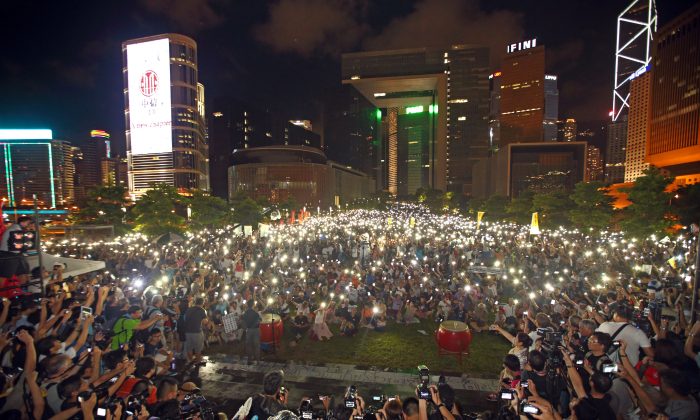 Hong Kongers Have Had Enough of Beijing’s Deception

HONG KONG—For decades Hong Kong democrats have dreamed of universal suffrage. On Aug. 31, the Chinese communist regime officially shut the door on this possibility for the next election, infuriating Hong Kongers and moving them to action.

Since Britain agreed to return Hong Kong to China in 1984, democracy supporters in the city-state have hoped to someday elect their chief executive and Legislative Council members by true universal suffrage without control by the Chinese Communist Party (CCP).

The CCP has repeatedly postponed its promise of true universal suffrage. Their most recent decision is that Hong Kong can have universal suffrage as long as a Beijing-controlled nominating committee selects the chief executive candidates and Beijing gets the final say in the election.

As a result, many Hong Kongers feel that they have been deceived for 30 years.

One Lie Too Many

Alex Chow Yong-kang, Secretary General of the Hong Kong Federation of Students, broke into tears during a rally on the evening of Aug. 31.

“We were all saddened at how much the efforts of young men have been wasted for the past 30 years, going around in circles on the issue of democratic development,” Chow said. “After this battle, the majority who support democracy, including the moderates, have been pushed into a dead end by the CCP.”

“Who would still hold out hope of negotiating with the Communist Party? Who would still believe in the lie of ‘one country, two systems’ and the high degree of autonomy?”

Chow was referring to the CCP’s promise in 1984 that Hong Kong would have a high degree of independence from mainland China, with the principle of “one country, two systems.”

Chow told Epoch Times that in the future Hong Kongers will fight for their autonomy, including launching student strikes, instead of trusting the CCP.

Nearly 800 thousand Hong Kong people voted for democracy in June during an informal civil referendum held by Occupy Central with Love and Peace, a nonviolent movement for universal suffrage. With their hopes of democracy dashed, Hong Kong citizens are rallying together to oppose the CCP.

“This is not the darkest day in Hong Kong, but the beginning day of Hong Kongers’ awakening,” said Occupy Central co-organizer Chan Kin-man.

Chan has participated in politics for years as a moderate scholar, attempting to negotiate with the CCP to carry forward Hong Kong’s democratic development. He supported Hong Kong’s political reforms in 2005 and 2010.

Now Chan is deeply upset with the decision by the CCP’s National People’s Congress (NPC) to deny true universal suffrage. He said the decision shows that the CCP would never grant any real power to Hong Kong.

Chan said that in the early 1980s some students from the University of Hong Kong were concerned with Hong Kong’s future after the handover, so they demanded democracy.

Later the hope was to achieve universal suffrage in 2012, but the CCP delayed it again. Chan said that the moderates and the democrats, including the Democratic Party, all feel like they have been deceived.

“When we accepted the time frame, we thought 2017 was the finishing point. But now 2017 is just a starting point, and democratic development is to be carried forward slowly, step by step [according to the CCP],” Chan said.

However, Chan sees hope in the darkness.

“We are willing to protect our way of life with the power of the people, which is a gratifying thing,” he said. “We hope that society will not develop a pessimistic mood just because the political reform has encountered a dead end. I hope we all stay in this place to protect our homeland, making this the beginning of a new chapter.”

Cheng Yu-shek, convener of the Alliance for True Democracy, thinks the CCP has deceived Hong Kong in two major aspects in the past 30 years. The first is the promise of a high degree of autonomy.

“Now some Beijing officials have said Beijing must take control over Hong Kong. This is a dramatic change,” Cheng said.

The second deception is the promise to achieve democracy in Hong Kong step by step. The NPC’s recent decision is a regression, Cheng said.

“How is ‘step-by-step’ reflected in this? They often say that Hong Kong will have democracy when conditions are ripe, but how to tell when the conditions are ripe?” Cheng said. “Therefore, we can see clearly that the Party will hold on to the power over Hong Kong, and it will certainly not allow genuine democracy in Hong Kong.”

Cheng places his hope in long-term and persistent fighting, and never giving up.

“We shall safeguard our core values, lifestyle, and dignity,” he said. “We refuse to let Hong Kong become another mainland city.”

Taiwan political critic Lin Baohua held a press conference in Taiwan echoing Hong Kong’s democratic campaign. He said the NPC’s decision has shown that the CCP no longer needs to make Hong Kong an example of “one country two systems” to show to Taiwan.

Lin said the CCP is deceptive by nature, putting on a show for the public and letting them have fantasies. Before the NPC meeting, both Beijing officials and Hong Kong CCP supporter Lau Siu-kai said that NPC’s decision wasn’t final, and there was still room for discussion.

“However, this [political reform] draft was a step backward,” Lin said.

According to Lin, the previous rule “allows one to become a chief executive candidate with just one-eighth of all nominating committee votes, but now at least a 50 percent nomination is required.”

‘CCP Must Be Overthrown’

Lin added that only by disintegrating the CCP will Hong Kong have democracy.

“The CCP must be overthrown,” he said. “The CCP itself is opposing democracy, and it’s impossible to let Hong Kong develop democracy.”

“If it did, Guangzhou, Beijing, and Shanghai would all want democracy, and then what? So it’s impossible to grant democracy to HK,” Lin said.

Senior political commentator Lin Yuet-tsang wrote in his column in the Hong Kong Economic Journal that political circumstances have entered a sharp downturn. He said the CCP has shown its true nature, shocking many moderates, centrists, and those who are not usually concerned with political affairs.

Lin Yuet-tsang said he never believed Hong Kong could obtain democracy from the CCP’s hands. He added that he has been fighting for three decades, and it is important to spread democratic awareness.

Epoch Times columnist Xia Xiaoqiang said Hong Kong’s democratic system has demonstrated the universal values of freedom and human rights to the mainland Chinese people. This is what the CCP fears, Xia said.