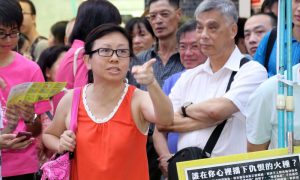 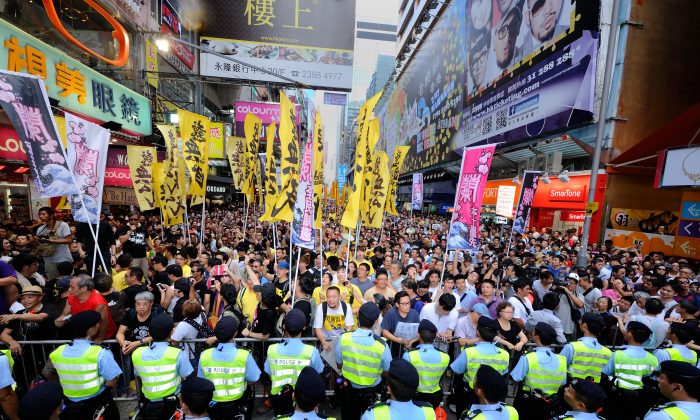 HONG KONG—A crowd of 3,000 turned out on a hot and sultry Sunday afternoon on Aug. 4 on Mong Kok Street to defend a primary schoolteacher targeted by groups affiliated with the Chinese Communist Party. The crowd was raucous, but also anxious, concerned that Hong Kong’s cherished liberties are slipping away.

Previously on Mong Kok Street, on July 14, a large crowd had spontaneously gathered to condemn the Hong Kong Youth Care Association, a CCP front organization, which was caught in the act of harassing a small group of practitioners of the spiritual discipline Falun Gong.

Among the crowd was the schoolteacher Ms. Lam Wai Sze, whose remarks upbraiding police for failing to protect the practitioners drew applause and laughter from the crowd.

CCP sympathizers edited video of her remarks in order to portray Lam as being at fault and then broadcast the doctored video on CCP-affiliated media outlets. Harassment of Lam and her family followed, with calls for her dismissal and funeral wreaths with her name on them being left at her school.

However, public opinion swung around behind her when a full, unedited copy of the video was broadcast.

On Aug. 4, the Parents Association, which is known to be friendly to the CCP, held a forum on Mong Kok Street meant to shift the focus of public discussion away from the targets of Lam’s remarks—a compliant Hong Kong police and a Youth Care Association that has aggressively sought to deprive Falun Gong practitioners of their rights—and back onto Lam’s supposed misbehavior.

At least five Hong Kong organizations, including a political party and the pro-democracy group Hong Kong Front, came to Mong Kok Street to defend Lam and to condemn the threats to civil liberties in Hong Kong by CCP front groups.

Initially the crowd surged forward with several pro-Lam protesters taking the Parents Association stage. Some scuffles broke out and the police interposed themselves between the two groups.

The pro-Lam protesters shouted slogans such as “Overthrow the CCP; kick out the Youth Care Association” and held signs condemning the attempt by pro-CCP organizations to silence Lam.

There were complaints of abuse by the police. Jiu Hun Chung, the spokesman for Hong Kong Front, after being detained in what police later termed a “misunderstanding,” said: “Hong Kong is becoming more and more like mainland China. Police should be enforcing the laws, not kicking and yanking ordinary people.”

Legislative Council member Albert Chan said that he had received complaints accusing the police of beating people and would ask for an official explanation.

Chan said that over the past year, the Hong Kong Youth Care Association has bullied Falun Gong practitioners and used “despicable methods” to suppress them.

The Youth Care Association is known in Hong Kong as a CCP front group that began harassing Falun Gong practitioners in June 2012. For 10 months the association blanketed Hong Kong with banners slandering Falun Gong in terms drawn from CCP propaganda.

In April 2013, the association was forced to take down the banners it had affixed throughout the city, but it has continued harassing the practitioners. On July 14, the association used hand-held banners in an attempt to wall off practitioners at a table on Mong Kok Street so that the public could not see them or speak to them. The police stood by without taking action, as they have mostly done in the face of the association’s aggression.

“Nowadays, the police are neglecting justice, and people are feeling the gradual death of Hong Kong’s judicial system; it cannot stay this way,” Chan said.

Legislative Council member Leung Yiujung told the Epoch Times that relatives of police officers had said that the police were instructed by their superiors not to enforce the law.

“It turns out that the superiors gave them guidelines that whenever they received complaints related to the [offenses by the] Hong Kong Youth Care Association or [reports of those offenses by] Epoch Times, they should turn a blind eye and ignore them,” Leung said. “These are political guidelines used to suppress those viewed by the government as dissident groups and individuals. “

Leung said he would call for an investigation into why the police have condoned the behavior of the Youth Care Association.

A nearly nine minute video of the incident prepared by Epoch Times’ Chinese edition shows the people of Hong Kong turning out to speak out in support of Lam Wai Sze, and for their own rights, on Aug. 4.

Written in English by Stephen Gregory.

Correction: The crowd size was originally estimated to be in the tens of thousands. A more accurate estimate is 3,000. The Epoch Times regrets the error.