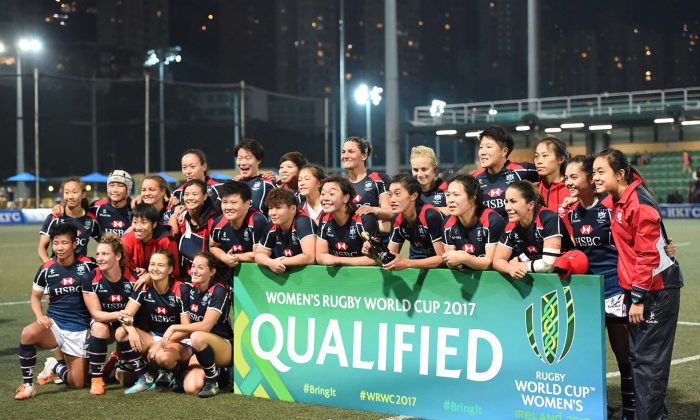 Hong Kong women show their delight in qualifying for the 2017 World Cup in Ireland following their success in the World Cup Qualifier in Hong Kong on Dec 17, 2016. (Bill Cox/Epoch Times)
HK Sports

Hong Kong Women Qualify for the World Cup in Ireland

HONG KONG—In mid-December a subtle, significant shift took place in Hong Kong rugby, Hong Kong Women, who have often flattered to deceive, particularly on the Sevens circuit, quietly and deservedly qualified for the Women’s Rugby World Cup Final to be held in Ireland in 2017 (the matches will be held in Dublin and Belfast from August 9-26, 2017).

The opening match augured well for Hong Kong, with a comfortable win over Fiji, 45-7. It was perhaps Hong Kong’s finest performance as a XV to date, and demonstrated the progress being made with the squad under Jo Hulls tutelage, as the ‘holy trinity’ of funding, focus and fitness translate to on-field performance and results. The win was a massive step forward for Hong Kong and placed them on the edge of qualification.

Long before the final whistle, in the match between Japan and Fiji, won with ease by Japan 55-0, Hong Kong was assured of tickets to Ireland and a place in the 12 team line-up. The only question: do they go as the number one seed from this part of the world or number two?

That was determined on Saturday Dec 17 in the final match of the tournament between Japan and Hong Kong. Japan prevailed 20-8, but this was a more assured performance by Hong Kong. Earlier in the year Hong Kong played Japan twice and lost, 39-3 and 30-3.

This time, despite losing Hong Kong was always competitive and matched Japan in all phases of the game, bar finishing. Japan scored two early tries, the first after only 4minutes, by hooker Misaki Suzuki and another soon after by fullback Mayu Shimizu, to establish a 10-0 lead, and forced Hong Kong to chase the game. Japan kept Hong Kong at bay for the rest of the first half, and despite enough possession, Hong Kong could not break the Japanese defense.

The second-half followed the same pattern: Hong Kong dominated possession, but Japan looked the more dangerous with the ball in hand. A fine break from the halfway line by fullback Shimizu after 47minutes, outsprinting the Hong Kong defense eased Japan to a 15-0 lead.

Still Hong Kong persevered, and won a penalty after 55minutes which centre Adrienne Garvey converted, to narrow the difference to 15-3.

On 63minutes once Japan had clawed back into the Hong Kong 22 their forwards rumbled over for another try, touched down by prop Saki Minami, giving Japan a comfortable 20-3 margin.

Hong Kong had the final say. They had earlier come close to scoring through livewire winger Chong Ka-yan, but on 73minutes a good line break by flyhalf Rose Hopewell-Fong, who had a very accomplished game, set-up Number Eight, Melody Li to touchdown.  This was Hong Kong’s first try in three matches against Japan in 2016, and the team celebration reflected the scale of that achievement. Despite controlling the final minutes of the game, Hong Kong could not narrow the gap and the final result was 20-8 to Japan.

It means Hong Kong qualifies for Ireland in Pool A with New Zealand, Wales and Canada: and Japan in Pool C with France, Ireland and Australia.

This is the first time, either for Men or Women that Hong Kong has qualified for a Rugby World Cup XV-a-side tournament. It is a huge fillip for the game in Hong Kong, especially for women. Whilst the squad is to be congratulated, success has stemmed from a well-developed strategy to promote women’s rugby in Hong Kong, and create a competitive league structure, supported by good coaching and professionalism. The funding available to rugby provides the Hong Kong team with resources unparalleled by other Asian Unions, and has created opportunity through quality coaching and international matches to strengthen and expose the team.

This was a massively improved performance by Hong Kong. For the first time they looked capable of matching Japan and being the best in Asia. There is now a tremendously motivating goal to aim for. Between now and August and boarding  the plane to Ireland Hong Kong will need to improve basic skills like passing and tackling; find an extra yard of pace from every player; improve fitness, and tighten the kicking skill, so penalties convert into points and  try scoring opportunities. Credit to Jo Hull for molding this team; the hardwork just got harder! To quote, Jo, she said this achievement is “massive” and “won’t fully sink in until after the weekend”, but the reality is Hong Kong, next August, will compete at the premier event for the Women’s rugby, the World Cup: a first for Hong Kong, for either men or women.

The women’s team deserves a very happy Christmas, there was no better end of year present for Hong Kong rugby, and Ireland is the perfect New Year resolution.