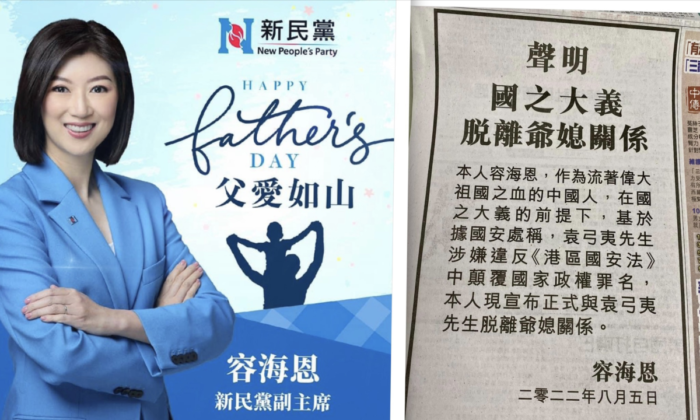 A husband and wife report on each other, a father and son sever ties with each other, the absurd incidents that were typical during the Cultural Revolution (1966-1976) in China are now playing out in a prominent Hong Kong family.

In a statement published in Hong Kong’s Oriental Daily on Aug. 5, pro-Beijing politician Eunice Yung stated, “I, Eunice Yung, a Chinese person with the blood of our great motherland running in my veins and placing the overall national interests before everything else, hereby declare that I am cutting off ties with Elmer Yuen as my father-in-law, on the grounds that he is being investigated under the national security law for suspected incitement to subvert state power.”

Her father-in-law, Elmer Yuen, along with two other Canada-based Hong Kong activists, launched a committee on July 27 to establish a “Hong Kong Parliament” in exile.

The police “shall spare no effort in pursuing the cases in accordance with the law in order to bring the offenders to justice,” the Bureau said.

“The Security Bureau appeals to the public to dissociate themselves from individuals contravening the Hong Kong National Security Law, and the illegal activities those individuals organized, so as to avoid bearing any unnecessary legal risks,” a spokesman said in a statement.

A Family with Diverse Political Preferences

The daughter-in-law, Yung, 45, was a barrister before she joined the pro-establishment New People’s Party in 2016, and later became a lawmaker.

One of her sisters-in-law is Erica Yuen, former chair of People Power, generally considered a more radical faction of the democratic camp. Her other sister-in-law Mimi Yuen is moderately pro-democracy.

Her husband, scholar and political commentator Derek Yuen, considers himself a centrist.

Elmer Yuen, affectionately known as “Father Yuen” among Hong Kong’s pro-democracy citizens, is a 73-year-old businessman who has focused on fighting for the city’s democracy after leaving Hong Kong for Washington, D.C. in June 2020.

The dynamics within Yuen’s family were featured on an RTHK TV program in October 2020. Elmer Yuen said he was proud that a family as diverse as his can get along so well.

“Why do we say Hong Kong is a wonderful place to live? It’s precisely because people are free to do their own thing,” he said.

He also predicted that sooner or later the ruling Chinese Communist Party (CCP) would criticize his daughter-in-law for not cutting ties with him.

“So if she does so one day, I wouldn’t blame her. I will take it easy if she denounces me,” he said in the show.

In an interview with The Epoch Times, current affairs commentator Ji Da said that during the Cultural Revolution, it was common for sons to denounce their parents and for couples to expose each other’s so-called dark history.

Then Chinese leader Liu Shaoqi was denounced by his ex-wife and children, who put up Big-character Posters, shocking the entire nation. Big-character Posters are large hand made posters that are hung in public places. They were often used in the many CCP political campaigns to make commentary on events.

When current Chinese leader Xi Jinping was 13 he was labeled as a “counter-revolutionary” for saying a few words against the Cultural Revolution. His mother, Qi Xin, said she participated in the denunciation gatherings against him in order to draw a line between the two of them.

Ji pointed out that the CCP is extending its anti-humanity ideology to Hong Kong, such as, family affection is unimportant when someone within the family is a “counter-revolutionary.”

“What the CCP is doing is not as simple as occupying Hong Kong. Its real purpose is to turn Hong Kong people into mainlanders, to carry out complete ideological remolding, and to destroy all the traditional ethics, inter-personal relations, and kinship that Hong Kong originally possessed,” she said.