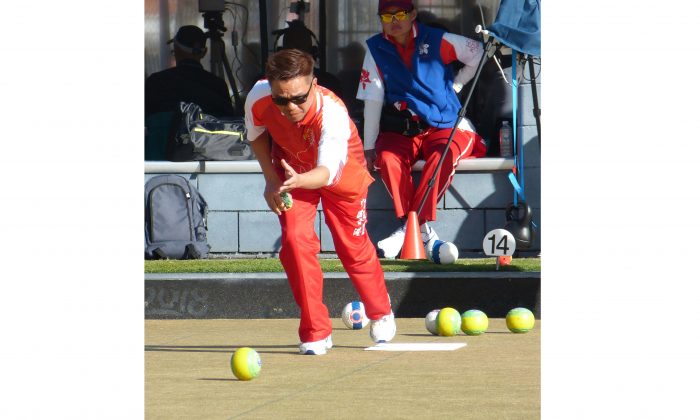 The best effort from Hong Kong international Tony Cheung was not enough to defeat New Zealand’s Shannon McIlroy in the semi-final of the men’s singles at the Asia Pacific Championships in Gold Coast, Australia, last Thursday, June 27. Cheung can only settle for a bronze after the defeat while McIIroy went on to prevail in the final. (David Alan)
International

The team also broke into the knock-out stage in men’s fours and women’s pairs, which helped the team to finish fifth in the men’s overall and seventh in the women’s overall ranking.

As the competition also served as a qualifying event for the 2020 World Bowls Championships, the results also mean that Hong Kong have qualified at all disciplines.

In the men’s singles, Bowler of the Year Tony Cheung, who was a member of the fours team who won the bronze last term, lost to the eventual champion in the quarter-final and settled for a bronze.  The women’s fours also lost to the champion at the same stage.

Cheung won six matches in the roundrobin stage, but lost to New Zealander Shannon McIlroy, an opponent he lost to at the final of the last World Champion of Champions, and Koko Ontong of Thailand.  He beat Malaysian Hizlee Rais in the quarter-final with a comfortable score of 21:12.

In the semi-finals he met McIIroy again.

McIIroy started well, winning the first four ends with one shot each.  Cheung replied with a two in the following end but lost five shots in the next two ends.   Cheung fought back in the following few ends and closed the gap to 9:7 in the 11th end.  However he lost four in the next end and could not overturn the deficit through to the end.  The game finished 21:11 and he had to settle for his second bronze.

McIIroy went on to beat Ryan Bester from Canada to lift the title.

Cheung is happy with the result and said that it is within his expectation, “When I saw the grouping I knew which games we needed to win so we kept a strong focus on those games.  I believe I played to my best standard and fortunately the results came out as expected.

“However, it also shows that there is still a gap between us and the world class players, especially those from Australia and New Zealand.  I think we really need to try hard to catch up with them.”

The women’s fours team included skipper Angel So, Cheryl Chan, Gloria Ha and Phyllis Wong.  They started very well in the competition, won all three games against China, Fiji and Thailand in the first day to top the table with nine points.

Skipper So believed that the early arrival helped them to perform, “We came in early to get familiar with the green and it really helped us a lot.  We picked up the green better and the three wins in the first day also boosted our morale. Everyone performed to their good standard and we were full of confidence from the first match onward.”

In the roundrobin they only lost to the host nation Australia and Japan.  The team played Canada in the play-off and won comfortably at 17:7.

Hong Kong then faced New Zealand in the semi-finals.  The team started well and opened a lead of 2:11 after eight ends.  They lost three shots in the following end but pulled one back in the 10th end.  The Kiwis then changed their tactic to play long and pulled back seven shots in the following five ends to force the game into tie-breaker.

So is happy with the result and believed that the change of tactic from the New Zealand team won them the game, “The team performed quite well from the start.  In the middle of the game our opponent changed the playing distance.  Although we can also manage that distance, their third and skip performed better and their conversion ratio was better than ours.  It was such minor difference that decided the winner.”

The New Zealand team later defeated Malaysia and took gold in the final.

Hong Kong team coach Geoff Maskell said, “The players worked hard during the 6 week period before the event assimilating new concepts and learning new skills and that was rewarded with quality performances across the board during the event. Very proud of the way the team performed and great to win two medals and come so close to winning two more.”

Glyn Davies, vice president in charge of international affairs at the Hong Kong Lawn Bowls Association is very happy with the results, “In addition to the two bronze medals, we finished 5th out of 18 in the men and 7th out of 18 in the women which is a great performance.

“This was the first step in our new high performance program and I am very pleased with the team’s performance. One of our primary goals was to ensure that we qualified for the World Bowls Championships next year which we did comfortably in all eight disciplines which is a fantastic result and to see our players on the podium alongside the stars of the sport was very special indeed.”

Held every four years, the 2019 Asia Pacific Championships was staged at Gold Coast in Australia.  A total of 19 bowling nations from Asia and Oceania areas participated in the 11-day event, where New Zealand and Australia shared all gold medals between them.