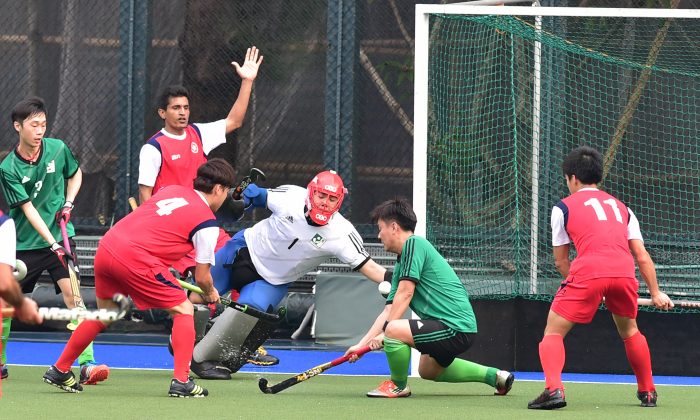 In a competitive senior match, enjoyed by a good sized crowd of hockey supporters, although Hong Kong held territorial advantage in the first half Macau defended well and counter attacked on a number of occasions but the score remained at 0-0 at the break.

Macau were the first to break the deadlock scoring from a penalty corner in the first minute of the 2nd half setting Hong Kong on an even more assertive path, pressuring the Macau defence. Hong Kong was awarded a penalty corner five minutes later but the shot went over the bar. A second penalty corner shortly after was also defended successfully by Macau.

Another attack by Hong Kong, this time by their No 4 was also thwarted by good goalkeeping. Then a run by Ishtiaq Ahmed was stopped by a Macau defender and the ball ran to the side, but the umpire awarded a penalty corner to Hong Kong. After a conference between the two umpires the penalty corner decision was upheld and Hong Kong scored to equalize at 1-1, 15 minutes into the half. At this time it was still anybody’s game but Hong Kong scored a second, this time by Ahmed with a reverse stick drive with 12 minutes left on the clock.

By this time Macau seemed to be losing enthusiasm and the game continued with Hong Kong the main attackers, resulting in another goal for Hong Kong with just seconds left on the clock to make the final score 3-1.

In the earlier matches Hong Kong Vets overpowered their Macau counterparts in the wining 10-0. In the opening game of the day, the Hong Kong Juniors team won by a single goal scored by Curtis Wong.