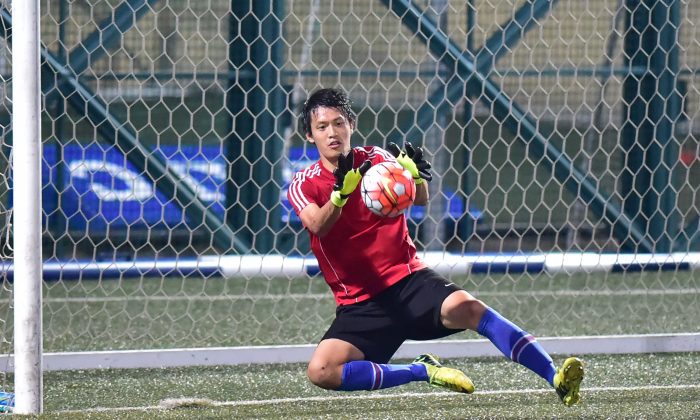 HONG KONG—The Interport game between Hong Kong and Macau was played on Saturday Nov 14 at Siu Sai Wan Sports Ground. Despite Hong Kong creating the majority of the chances in the first half, the teams went into the half time break scoreless. Hong Kong settled the game with two second half goals, the first in the 63rd minute when Hui Ka-lok finished after receiving a pass from Lee Ka-yiu, and the second in the 79th minute when Philip Chan headed in via the post from Michael Luk’s free kick.

Yau Yee League
In the first division, Wanderers won 3-2 against Albion, The Store House Squadron were 4-1 winners against Baker Tilly Spartans, KCC Dragons won 1-nil against USRC, Colts were 2-1 victors over HKU70’s, and GAS were 2-1 winners against Swiss XI.
GAS lead the table with 24 points from 9 games, Wanderers are second with 22 points, Albion and KCC Dragons are joint third with 21 points.

In the second division, Azzurri were 5-1 victors over University, GGFC were 3-1 winners against IUSC (Tai Po), IES won 4-3 against WYFC06, French Kiss were 3-nil victors over the Store House Hearts, KCC Knights were 1-nil winners over Antonhill, and Colloids FC drew 1-allwith Boca Seniors.
KCC Knights lead the table with 21 points, with Azzurri second with 20 points, French Kiss are third on 18 points, and GGFC fourth on 17 points, all from 9 games.

In the fourth division, Darts won 4-2 against WYFC84, Rising Sun were 3-nil winners against Hung Art, Outward Bound were 1-nil victors over Bapcoll, Power 22 were beaten 1-nil by Scorpions, and Maccabi HK were 1-nil victors over Skyline.
Maccabi HK lead the table with 24 points from 9 games, with Friends of Barclays second with 22 points from 8 matches, Scorpions third with 19 points, and Outward Bound fourth with 18 points, both from 9 games.