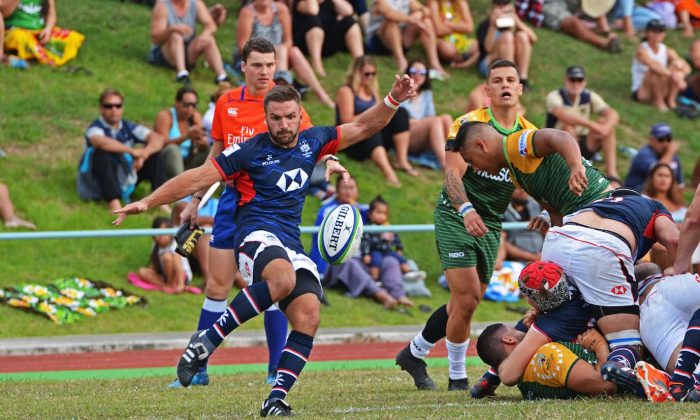 Hong Kong won the first-leg of their Rugby World Cup play-off against the Cook Islands on Saturday June 30, 2018, in Rarotonga 26-3. It was a comprehensive victory and outstanding result. It gives Hong Kong a strong advantage for the return match this weekend July 7 at the Hong Kong Football Club. They will need to win, or lose by less than 22 points, to represent Asia/Oceania in the November repechage tournament for the final place at the 2019 Rugby World Cup in Japan.
It was the first time the two sides had played each other: for both teams there is much at stake.
For Hong Kong, the match was as much about on-field discipline and game management, as it was about meticulous off-field preparation. Leigh Jones, the Head Coach, ensured attention was given to the time difference and effect this has on the diet and sleep pattern for the players, not just for this match, but to readjust for the return game. Having players, physically and mentally tuned-in for such critical matches is crucial.
The focus, was evident from the kick-off. With the strong wind behind them in the first half, Hong Kong took full advantage of the favorable conditions, and were on the front-foot from the outset. In the 3rd minute, Hong Kong crossed for their first try. No.8 Thomas Lamboley touched down, before the Cook Islands had touched the ball. Flyhalf Matt Rosslee missed the conversion, but Hong Kong had taken a 5-0 lead, that boosted confidence and lifted the team.
After 12 minutes neat interplay between fullback Jack Neville and centre Lex Kalecka, created space for scrumhalf Liam Slatem to score in the corner. The conversion was missed, but Hong Kong had doubled their lead to 10-0.
On 23 minutes, Hong Kong conceded a penalty to allow the Cook Islands, through centre Greg Mullany to open their account on the board and narrow the score to 10-3.
Hong Kong responded minutes later when Slatem put winger Conor Hartley clear to cross for a 3rd try; again, the conversion was missed, but Hong Kong’s lead extended to 15-3. And further extended with a penalty goal by Rosslee. By half time the visitors led 18-3.
With the wind behind them, the Cook Islands were more formidable in the second-half but could not break Hong Kong’s dogged defense. It was Rosslee, with a penalty goal, that added the first points of the half, stretching the lead to 21-3.
Hong Kong then stuck to their task of defending their line and intelligently counter-attacking. They were rewarded late-on in the game when winger Salom Yiu Kam-shing and centre Max Woodward combined effectively for Woodward to score the final points of the match and give Hong Kong a deserved hard-earned victory 26-3.
The return leg is this Saturday in Hong Kong (7th July): both teams need to recover from the match, prepare for the next one, and undergo a long journey before taking the field. Whilst the advantage is with Hong Kong, and they fully deserve to celebrate victory, the ultimate prize (for now) is still to be decided…a place in the repechage. There is still much to play for and no room for complacency.

Grahame Carder is a sports enthusiast, former player and resident of Hong Kong.