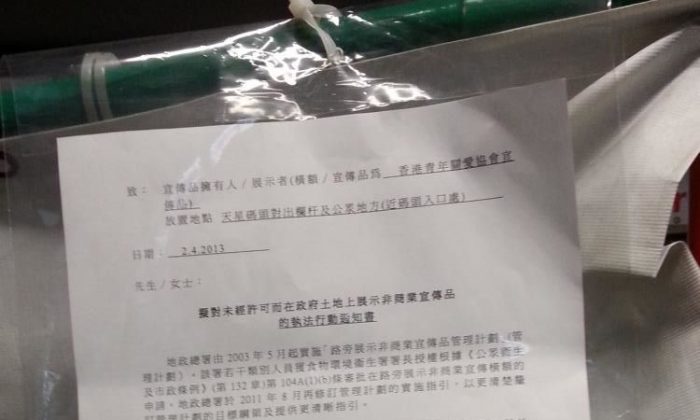 A Hong Kong government department has issued a notice to a Chinese communist front group to take down banners at a popular tourist spot.

The news comes over nine months after the Hong Kong Youth Care Association first began attempting to disrupt local Falun Gong protesters by plastering its own banners over theirs’, and may indicate a change in tone by local Hong Kong authorities toward the group. The Youth Care Association has close ties with the 610 Office, an extralegal Communist Party agency that was set up to persecute Falun Gong in 1999.

The notice, placed inside a transparent plastic sleeve and hung on one of the Association’s banners at the Star Ferry Terminal, a popular tourist spot for Mainland Chinese, said: “The current location is government property, and the present exhibit does not follow the management plan for displays, and did not receive permission from the relevant authorities.” It was signed by the Food and Environmental Hygiene Department.

A Facebook group calling itself “Expose the Evil Deeds of the Hong Kong Youth Care Association” first published the photograph of the document. It quickly received nearly 200 “Likes.” Aaron Chan, a wedding photographer in Hong Kong, noted the news on Facebook and wrote: “Better late than never.” He added that “But if they also ban the Falun Gong banners, the plot of the communist bandits will have been a success.”

According to the notice, the banners were in violation of “Public Health and Municipal Government Regulations” and the organization responsible for them could be fined 10,000 yuan (US$1,613), and 300 (US$48) every day that the banners stand.

The notice continued: “The group must remove the current banners and publicity materials, and prevent the same incident from recurring.”