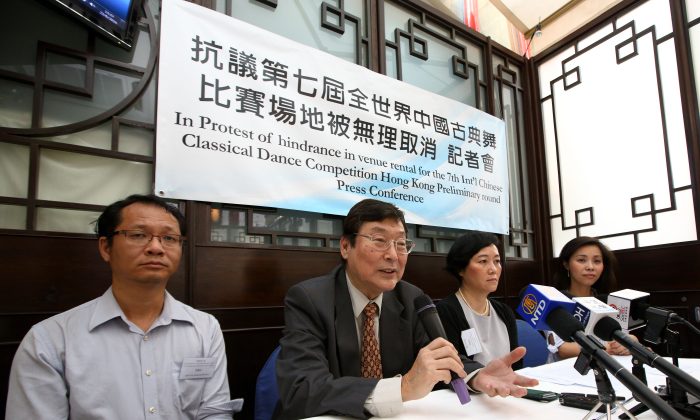 New Tang Dynasty Television and the Hong Kong branch of Epoch Times hold a press conference in Hong Kong's Foreign Correspondents' Club to provide background on the cancellation of a venue for an international dance competition on June 23, 2016. (Poon Zai-shu/Epoch Times)
China

Owners of Heung Yee Kuk Tower Theater made to give Hong Kong government priority despite having signed a formal contract with New Tang Dynasty Television.
By Larry Ong

Three months before the preliminary round of an international classical Chinese dance competition was to be held in Hong Kong, local organizers inked a formal contract with a theater, and made a full payment. The theater owners on multiple occasions assured the organizers that the venue wouldn’t be cancelled and they would honor the contract.

However, the  owners recently told the organizers that they had to give up their spot because the Hong Kong government had made a “priority” request.

On April 22, NTD entered into a formal agreement and paid Heung Yee Kuk Building Management in full for the use of Heung Yee Kuk Tower Theater in Hong Kong’s Sha Tin district to hold the preliminary round of the seventh NTD International Chinese Classical Dance Competition. NTD and this newspaper are part of the New York-based Epoch Media Group.

The International Chinese Classical Dance Competition is part of a series of international cultural and arts events by NTD in 2007. The aim of the competition is to promote authentic, traditional Chinese classical dance. The Hong Kong round, which is scheduled for July 30, is meant for participants from the Asia Pacific region.

On May 26, NTD was notified by the building that the Hong Kong government required use of their theater on July 29 and 30 for election purposes. A week later, their booking was canceled.

Cheryl Ng, a spokesperson for Epoch Media Group in Hong Kong, said that while there are upcoming elections for Hong Kong’s legislature, they are being held in September, and it is unusual for the Hong Kong government to book election venues this many months in advance. The Hong Kong government also typically uses other public spaces like schools as poll stations.

“The unusual cancellation of the contract tarnishes Hong Kong’s status as a financial center,” Ng said. “We need to speak up about this to prevent a repeat with future events held by us or the people of Hong Kong.”

We need to speak up about this to prevent a repeat with future events held by us or the people of Hong Kong.
— Cheryl Ng, Epoch Media Group in Hong Kong

In a letter to the Office of the Chief Executive, Hong Kong’s Leisure and Cultural Services Department, and the Heung Yee Kuk Building Management Office, NTD Hong Kong thanked the theater management for accepting the application for the dance competition, and censured the Hong Kong government for creating the issue.

“Hong Kong’s ‘One Country Two Systems’ and the freedom of artistic creation are gravely undermined since Leung Chun-Ying was installed as Chief Executive. We understand that a small number of people from the Hong Kong government are behind this incident, and that the venue owner should not bear the main responsibility of canceling the venue. From our viewpoint, the Heung Yee Kuk is also a victim for being forced to revoke a signed contract,” the letter said.

This March, Hong Kong’s Leisure and Cultural Services Department had demanded the word “national” removed from the biography of a drama company member who graduated from Taiwan National University of the Arts. The department was condemned by the president of the Taiwan college for deferring to Beijing.

In October 2013, the Hong Kong government rejected Hong Kong Television Network’s (HKTV) application for a free television program license, and refused to give a reason. In a public statement, Ricky Wong Wai-kay, the chairman and founder of HKTV, hinted that Hong Kong Chief Executive Leung Chun-ying might have personal reasons for refusing them the license.

Shen Yun is a New York-based classical Chinese dance company with a mission to revive China’s 5,000 year-old culture, according to its website. The Chinese communist regime has a track record of attempting to block Shen Yun from performing around the world, and in May blackmailed a South Korean theater and the courts to cancel its shows.

During a June 23 press conference at the Foreign Correspondents’ Club in Hong Kong, local activists voiced their support for NTD, and censured Leung’s government.

Richard Tsoi, vice chairman of the Hong Kong Alliance in Support of Patriotic Democratic Movements of China, said that the Hong Kong government’s cancellation of the theater was very clearly a type of political suppression.

“If the Hong Kong government reveals the real reason [for the cancellation], they can’t support it because Hong Kong observes the rule of law. Secondly, we’re an international business and financial hub, so observing contracts is extremely important,” Tsoi said.

Hong Kong actor and film producer Leslie Alberto Ho said: “Leung Chun-ying’s government has done much to suppress the arts, be it dance, film, or music … many artists have suffered different forms of repression.”