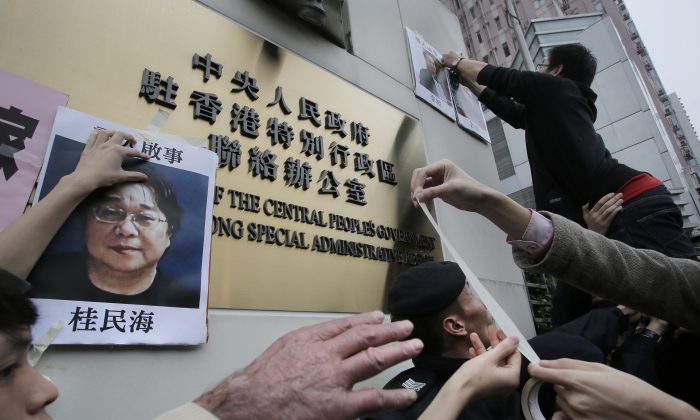 Protesters try to stick photos of missing booksellers during a protest outside the Liaison of the Central People's Government in Hong Kong on Jan. 3, 2016. (AP Photo/Vincent Yu)
China

HONG KONG—Hong Kong pro-democracy lawmakers said on Jan. 3 that they will press the city’s government for answers after a fifth employee of a publisher went missing.

Lawmaker Albert Ho said the city was “shocked and appalled” by the disappearance of Lee Bo. Like the four others who have disappeared in recent months, Lee is associated with Mighty Current, a publisher specializing in books critical of mainland China’s leadership.

We have strong reason to believe that Mr. Lee Bo was probably kidnapped and then smuggled back to the mainland for political investigation.
— Albert Ho, member, Hong Kong Legislative Council

While there’s been no official word on what happened to the five missing people, Ho told reporters that it appears their disappearances are linked to the publisher’s books.

“From the available information surrounding the disappearance of Mr. Lee Bo and his partners earlier, we have strong reason to believe that Mr. Lee Bo was probably kidnapped and then smuggled back to the mainland for political investigation,” Ho said.

It’s not uncommon in mainland China for company executives and dissidents to be detained for lengthy periods by the authorities or vanish without anyone claiming responsibility, but the disappearances are unprecedented in Hong Kong and have shocked the city’s publishing industry and residents.

The company’s co-owner, Gui Minhai, is also among those missing, as are three staff members.

Mighty Current and its Causeway Bay Bookstore are known for gossipy titles about Chinese political scandals and other sensitive issues popular with visiting tourists from the mainland.

Books by Mighty Current are banned on the mainland but are available in Hong Kong, which enjoys freedom of the press and other civil liberties unseen on the mainland because of its status as a specially administered region of China. However, the disappearances highlight growing concern that Beijing is moving to tighten its grip on the former British colony.

Hong Kong Acting Secretary for Security John Lee told reporters that police were “actively” investigating the case and would widen the scope of their probe.

The Hong Kong–Macau Affairs Office, which is under China’s State Council, could not be reached for comment.

Lee went missing on the evening of Dec. 30 and was last seen leaving his company’s warehouse, according to local media reports.

His wife told the Cable TV news channel in a report broadcast on Jan. 2 that she received a phone call from him the night he disappeared. She said he told her then that he was “assisting an investigation” and alluded to the earlier disappearances, but was not more specific.

The number indicated the call came from Shenzhen, the mainland Chinese city nextdoor to Hong Kong, the report said.