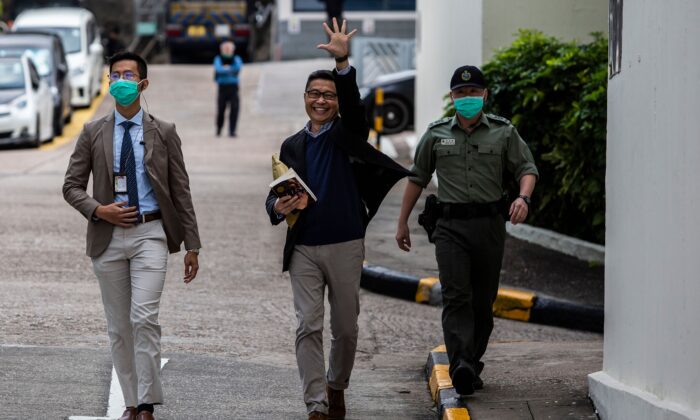 HONG KONG—Hong Kong democracy activist Chan Kin-man walked free from prison on March 14 saying he had no regrets for his leading role in the 2014 “Umbrella” civil disobedience movement and that sacrifice was needed to achieve universal suffrage.

“Life in prison was difficult, but I have no regret at all… as this is a necessary price to pay for fighting for democracy,” Chan said, chanting “I want universal suffrage” with dozens of supporters.

“I think after the last few months, Hong Kong people understand more why we had to use civil disobedience to fight for freedom.”

A retired sociologist and one of the three leaders of the pro-democracy movement, Chan was found guilty last year of conspiracy to commit public nuisance for his role in planning and mobilizing supporters during the 79-day protest that brought parts of the Chinese-ruled city to a standstill.

The Umbrella protests staged peaceful sit-ins, blocking major roads in the Asian financial hub, in a push for full democracy, although they failed to wrest concessions from Beijing.

The Umbrella movement got its name because activists used umbrellas to shield themselves from tear gas and pepper spray.

The symbolic umbrella tactic re-emerged in 2019 during turbulent anti-government protests triggered by a now withdrawn extradition bill that would have allowed criminal suspects to be sent to the mainland for trial in Communist Party-controlled courts.

Many protesters last year said the 2014 movement prepared them for further fights for democracy.

Chan said he understood why the young protesters resorted to “intense actions” in the last few months because they felt the government was no longer fair and just.

Chan, 61, said he plans to visit the young protesters arrested during the recent unrest and share with them his experience in how to mentally deal with the charges they face.

Hong Kong returned to China from British rule in 1997 under a “one country, two systems” formula that guarantees freedoms not enjoyed on the mainland but many activists accuse Beijing of tightening its grip on the city and eroding those freedoms.