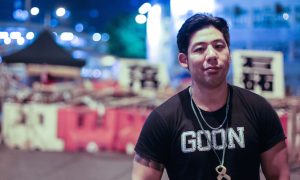 A couple of student protesters are trying to enter the LegCo building.

The protesters are apparently responding to a rallying call on HKGolden, a popular Internet forum that is considered the 4chan of Hong Kong. The “Support Our Ginger” campaign to mock anti-Occupy spokesman Robert Chow was organized on HKGolden.

In an earlier event, bailiffs and police are on hand to execute Hong Kong high court orders to clear out the Admiralty protest site.

Check out our live blog below, and Apple Daily’s live stream and some background information about today’s event after that.

All times are in Hong Kong Time, which is 11 hours ahead of Eastern Standard Time.

The Court of First Instance extended injunctions against the student-led protesters last week, and on Monday, Nov. 17, the plaintiffs, bailiffs, and police were briefed, and the latter two given the go-ahead to execute the court order.

Police can arrest those who prevent the bailiffs from carrying out their duties, and have urged those occupying the area to comply with the court order, dismantle their barricades, pack up their personal belongings, and end their act of civil disobedience.

Hong Kong publication Ming Pao reports that CITEC Tower staff will first ask the protesters to leave and try to shift the barricades themselves early Tuesday morning. If they are unsuccessful by 9:30 a.m. HKT (10:30 p.m. EST), the bailiffs and police will take over.

The student-led protesters have been occupying the area since Sept. 28, and have erected barricades and set up their tents on the roads leading to the government buildings, blocking traffic. An unofficial Facebook census puts the tent count at 2,269 as of Nov. 15.