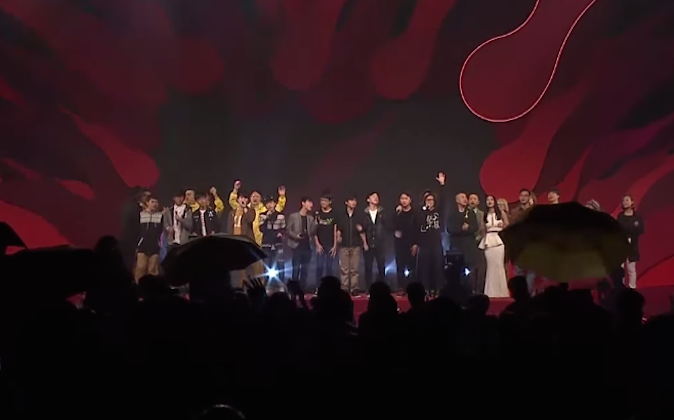 The Umbrella Movement’s anthem was voted song of the year at a Hong Kong music awards event.

“Raise the Umbrella” secured 2,887 votes from 8,000 attendees in the “My Favorite Song” category at Commercial Radio’s Ultimate Song Chart Awards Presentation event at the Hong Kong Convention and Exhibition Center (HKCEC) on Thursday.

Songwriter “Pan” Lo Hiu-pan and singers Denise Ho, Anthony Wong and Deanie Yip, were invited on stage to receive the award and say a few words. They later gave a live rendition of “Raise the Umbrella” with local group RubberBand.

Pan thanked all Hongkongers who supported the Umbrella Movement, and said that he wrote the song for “Hongkongers who have been working hard and struggling with everyday living.”

Ho, who is very vocal in her support of the pro-democracy movement, said: “The Umbrella Movement has let us know that our voices could be heard.”

Wong added that it’s time for Hongkongers to find their voice.

According to Hong Kong publication Apple Daily, twenty Umbrella protesters spent HKD$3,000 (about $387) to buy a hundred yellow umbrellas to distribute at the music awards.

HKCEC security staff told the protesters that they couldn’t hand out the umbrellas in the hall and filmed them when they started doing so. After that, a second group of protesters passed around another hundred yellow umbrellas.

Pan sought Ho, Wong, and lyricist Lam Jik’s help to fine-tune the song and make a studio recording. After Pan performed the song to a protester crowd at the Admiralty “Umbrella Square” site in October, the song took off on local radio stations and on Youtube.

Check out the song’s music video and English lyrics below.

Sitting peacefully among the crowds
We’re not scared of what will happen next.
But tonight, nothing is more terrifying than
Not speaking our hearts.

Standing on the front line, our courage can’t be dispersed
‘Cos our future can only be bleak if fear gets to us.
But whoever wants to see through this absurdity
Will surely have their eyes opened up by tears. [From tear gas]

Together holding up our umbrellas,
Holding up our hands.
Together we aren’t afraid to fight for what’s ours, are we?
Fierce rainstorms may strike,
But our determination will never fade.
Umbrellas are like flowers,
They neither wither nor disappear.

For the sake of tomorrow, we must remember this night.
You and I must remain calm in the face of hardship.
Whoever misses out on this night
Will likely never get the chance to speak your heart again.