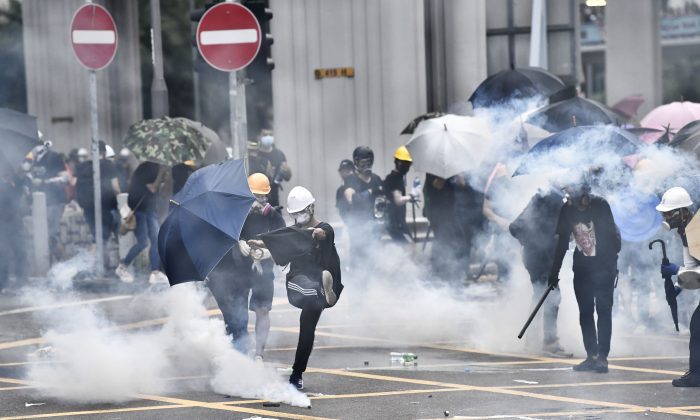 Anti-riot police fire tear gas at protesters during a demonstration in the district of Yuen Long in Hong Kong on July 27, 2019. The protesters were marching through a Hong Kong town near the Chinese border to rally against suspected triad gangs who beat up pro-democracy demonstrators there the previous weekend. (Anthony WallaceE/AFP/Getty Images)
Thinking About China

As gangsters beat up residents in Yuen Long and the protests against the extradition bill escalate, the situation in Hong Kong has entered a new phase. Its development affects Hong Kong and China politics. It may even shape the future of international politics.

A major feature of authoritarian regimes is that the administrative power comes from the highest level of the pyramid. Due to the complexity of the affairs of a large country, those in power have to rely on the layers in the bureaucratic systems to govern. Therefore, the political evolution in a large authoritarian country follows its own specific rules. The bureaucratic systems launch campaigns when they want something different than the highest power, or when they want the highest power to give in to their demands.

Such backlash to the highest power is often revealed in specific incidences. The Lei Yang case in 2016 was such an incident.

Beijing resident Lei Yang was detained on his way to the airport on suspicion of soliciting prostitution and died later on the same day at the age of 29. The police stated that Lei died of a stroke upon being caught at a foot massage parlor. State broadcaster China Central Television even aired the testimony of a prostitute, who claimed to have offered Lei sex services. The family found injuries on Lei’s body and suspected that Lei was beaten to death by the police. The police didn’t keep any records about the arrest and detention. The Chinese public was angry over the young man’s death and demanded an investigation.

As a result of the public outcry, Chinese leader Xi Jinping and Wang Qishan, then Secretary of the Central Commission for Discipline Inspection, ordered a thorough investigation. Beijing police were indignant, and 4,000 local police officers co-signed a resignation letter, resisting the investigation. The central authority of the Chinese Communist Party (CCP) rely on these police officers for the security in Beijing. Under pressure, Xi chose to quickly compromise. The Lei Yang case was not investigated, and the policemen involved were not held accountable.

The man at the center of the backlash was Fu Zhenghua from the Beijing Public Security System. Fu, then deputy minister of the Ministry of Public Security and concurrently a member of the Central Political and Legal Affairs Committee, led the severe suppression of human rights lawyers and dissidents. He also spearheaded the “Transparent Beijing” project, a project to monitor all possible political opponents of the highest powers.

Although Xi made a compromise on the incident, he no longer trusted Fu, originally transferred from the faction of Jiang Zemin, former head of the CCP. Fu was removed from the Central Political and Legal Committee in August of the same year. He was kicked out of the Ministry of Public Security last year and became the Minister of Justice, a largely cosmetic position in China’s judicial system.

Even though Xi took care of Fu, his compromise opened a new door to Chinese politicians. They realized that if they exerted pressure out of regime safety and political interests, even the highest power would have to compromise. After 2016, more members of the public security system assumed positions in local and central Political and Legal Committees. Local laws and policies rose again, and the various ministries and commissions in Beijing took a tougher and tougher stance in terms of following Xi.

The Lei Yang incident was a turning point for Xi’s administration. Xi’s power was on the rise before. It started declining following the Lei Yang case.

The current situation in Hong Kong is quite similar to that of the Lei Yang case.

The traditional CCP system has its own views and positions in governing Hong Kong. It also has its own traditional and customary tools of governance. Most importantly, it has its own huge interests. Such a system urgently needs Xi to provide clear instructions and authorization to handle the protests. Obviously, it has not yet received the authorization it wanted, so it has resorted to various means to intensify the situation to force Xi to accept its terms.

The scale, the negative economic impact of the Hong Kong situation, and the implication to domestic and international politics are over 100 times of that of the Lei Yang case. If Xi chooses to compromise again, he has then effectively announced the death of his new policies. It also means that Xi’s central authority doesn’t go beyond Zhongnanhai, just the same as with Jiang and Hu Jintao.

Let’s set clashes of political philosophies aside. The economic downturn, the loss of popular support, and the resentment of officials will lead to the outbreak of social conflicts. Xi’s anti-corruption campaigns made the entire system represented by many corrupted officials as his enemy. Even a peaceful resignation may not be an option.

If Beijing can manage the corruption in the Hong Kong system on a fundamental level, give the power of governance back to the Hong Kong people, and through this, accumulate experience of managing an open social system and migrate it to the Mainland, it may find a way out.

From this perspective, the Hong Kong situation is certainly a challenge for Beijing, but it is also an opportunity. Although the chance that Beijing will take the opportunity is extremely slim.