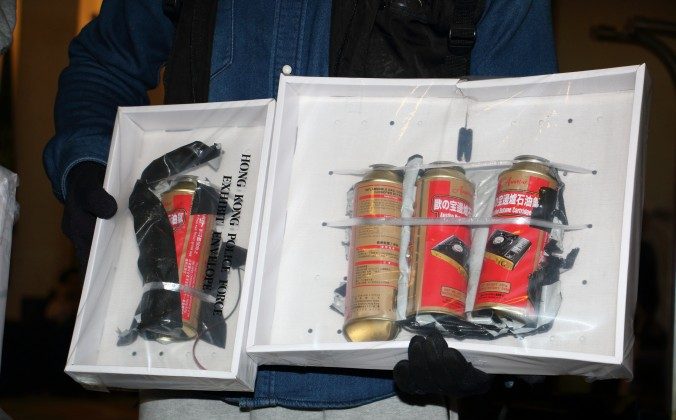 Five individuals who disrupted a Falun Gong conference in Hong Kong last month by calling in a bomb scare have been arrested recently, reports the South China Morning Post.

The newspaper, the largest English-language paper in the city, cited sources saying that some of the individuals involved were suspected to be members of organized crime, and that they were likely “hired by an undisclosed party,” to the tune of several thousand dollars, to derail the conference.

The bomb scare—caused after an anonymous call was made to the police—caused over 1,600 guests to be evacuated from the BP International hotel on Jan. 17. About 1,200 were practitioners of Falun Gong, a spiritual practice that has been persecuted in mainland China since 1999.

Practitioners of Falun Gong meet for conferences typically once a year in their local region, in which they share their experiences in the self-improvement practice. Speakers typically discuss their progress in following the practice’s principles of truthfulness, compassion, and tolerance, and reflect on how they can continue to improve their personal conduct and character.

After the Hong Kong bomb squad arrived at the hotel, they found an ominous-looking, but ultimately harmless, sight: a box containing five nearly foot-long liquefied gas canisters attached to two electronic timers. The device was no bomb, nor could it have exploded, but it bore enough similarity to a real bomb to warrant a cautious response by police. It had been placed in the men’s toilet on the first floor.

The South China Morning Post quoted Lo Chung-wong, acting chief inspector of the Kowloon West regional crime unit, that the perpetrators exhibited a “careful division of labour” to carry out the hoax. Some set up the bomb, while others stood watch.

According to one of the members of the security detail at the conference, speaking to an Epoch Times reporter, a member of the Hong Kong Youth Care Association, a known Chinese Communist Party front group, was spotted in the hotel hovering around the toilet soon before the bomb scare was called in.

This voluntary security staff member was of the belief that the Youth Care Association member was involved in the plot. The group, which shares an office in Shenzhen with the 610 Office, the extralegal Communist Party task force established to execute the campaign of elimination against Falun Gong in China, regularly engages in harassment against Falun Gong practitioners and their activities in Hong Kong. This includes by blasting loud anti-Falun Gong propaganda from speakers, cutting Falun Gong banners, spitting, shouting, and rapping their hard metal banner poles onto the knuckles of practitioners engaged in standing protests. In one well publicized episode, an individual affiliated with the Youth Care Association brandished a large knife to threaten a Falun Gong protester.