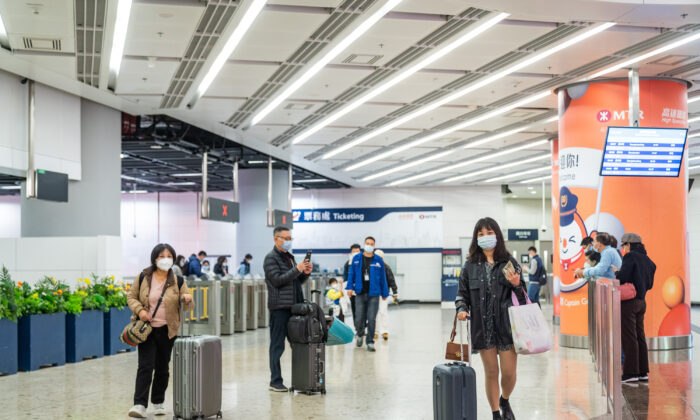 Nie Law
Nie Law is a contributor to The Epoch Times with a focus on Hong Kong-related topics.
View profile
biggersmaller
Print

The isolation orders for infected persons will be finally canceled after years of quarantine measures in Hong Kong.

Currently, COVID-19-positive patients and close contacts who are unvaccinated or have only received one dose of vaccine must be quarantined for 14 days.

Those who have received at least two doses of vaccine can have their isolation rescinded if they test negative in rapid antigen tests (RAT) on days six and seven.

On Dec. 8, 2022, a day after the Chinse Communist Party (CCP) lifted its pandemic restrictions, Hong Kong authorities announced that the quarantine period for confirmed cases and close contacts would be reduced from seven days to five days from Dec. 9, regardless of whether they were vaccinated or not.

On Dec. 14, the Hong Kong government announced five relaxation arrangements. It abolished the need to scan the “LeaveHomeSafe” app when entering a venue and the yellow restriction code for travelers arriving in Hong Kong, who would be allowed to travel freely after they have the PCR tests upon arrival, without the 3-day quarantine.

In addition, the rapid antigen test was dropped for ports of entry from Hong Kong to Mainland China or Macau. At the same time, the requirement for those in home quarantine to wear electronic bracelets was eliminated, and the mandatory inspection notices issued to residential buildings would be gradually reduced.

On Dec. 29, it deactivated the vaccine pass and all social distancing measures, but with the mandatory mask-wearing in public still in place.

Since then, the number of confirmed cases in Hong Kong reported by the Hong Kong government has dropped from nearly 30,000 on Dec. 3 to just under 2,000 newly reported positive cases on Jan. 24. However, there is no information as to how the lifting of restrictions has affected the identification of new cases.

As to why the local pandemic control measures are being relaxed, Lee explained that since the fifth wave of the pandemic in Hong Kong, many citizens have acquired immunity due to being infected or vaccinated, thus achieving an immunity barrier in society.

Lee also said that since most of the symptoms of the current variant are mild, the government’s “one-size-fits-all” handling of the pandemic should be changed to allow citizens to take responsibility and make their own decisions on how the disease should be treated, as for any of the other upper respiratory diseases.

Since the border between China-Hong Kong reopened, the number of inbound tourists from China has, according to government data, increased from 5,046 on Jan. 8 to 14,892 on Jan. 20 but dropped back to about 10,000 each day during Lunar New Year.

Some Legco members are concerned about whether the rapid antigen test can replace the nucleic acid test for crossing the borders. Lee responded that the issue involves the Hong Kong government, the Shenzhen Municipal Government of Guangdong Province, and the central government, and it will take time to discuss.

On Jan. 9, the chief executive of the Travel Industry Council of Hong Kong (TIC), Fanny Yeung Shuk-fen, said that due to the unexpected border opening, coupled with the then-approaching Lunar New Year, Hong Kong might not see many visitors from the mainland soon as many had already made their travel plans.

She quoted some travel agencies in the mainland as saying there would be no tours to Hong Kong until early February and that it would start with ten groups per day, with about 30-40 tourists each.

She estimated that the daily number of visitors to Hong Kong would be less than ten percent of the number before the pandemic. As for individual travel, she expected that the number would pick up from mid to late February and that more mainland visitors would visit Hong Kong by March.

On Jan.15, Dane Cheng, executive director of the Hong Kong Tourism Board (HKTB), told Commercial Radio Hong Kong that after the implementation of “0+3” (no mandatory quarantine but only three-day medical monitoring) at the end of September 2022, the number of visitors to Hong Kong began to rise gradually, but at a slow pace, with mainly business travelers and those visiting relatives, followed by individual or group tours, and that large group tours have not yet resumed.

The Chief Secretary for Administration, Eric Chan Kwok-ki, said in an interview published in the Hong Kong Economic Times on Jan. 19 that more than a million mainlanders had applied for travel or business visas to Hong Kong in the ten days since Jan. 8.

They were expected to come to Hong Kong after the Lunar New Year and the Spring Festival travel rush to “boost the economy.”

He said that this would allow shopping malls, eateries, and attractions time to resume their operations to prepare for a new wave of visitors. He also said that if Beijing allowed it, Hong Kong would drop the PCR test requirements anytime.

Speaking to the media after attending a New Year’s event on Jan. 22, Chan said the number of confirmed cases had not increased, and the healthcare system was not overloaded. He believed that Hong Kong had the conditions to further relax the border crossing requirements and move on to the second phase.

Nie Law
Nie Law is a contributor to The Epoch Times with a focus on Hong Kong-related topics.